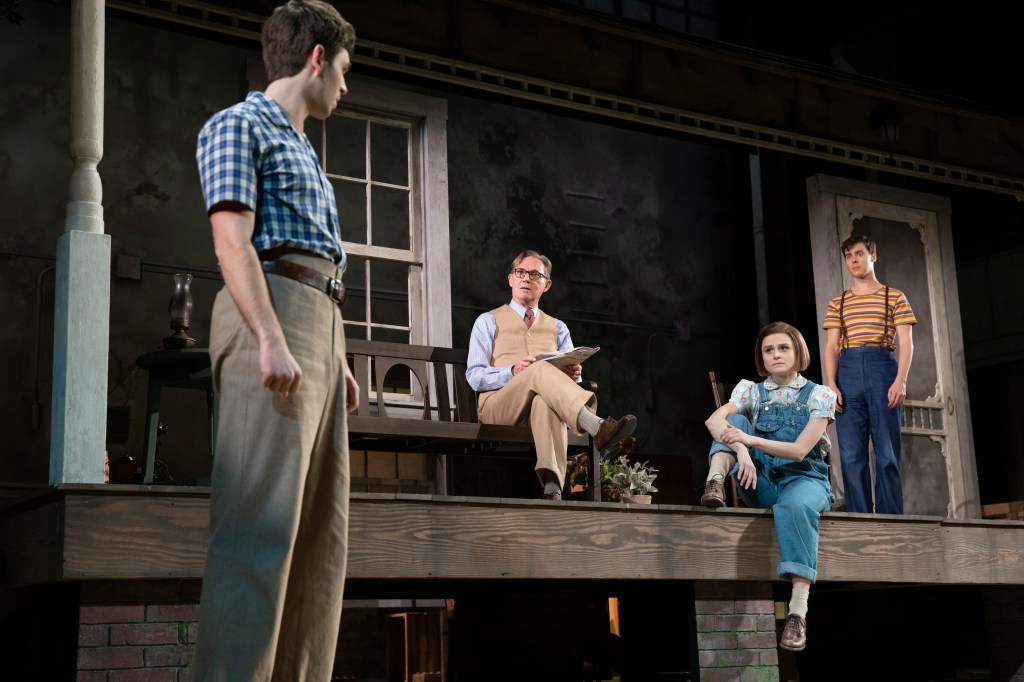 At its best, the latest touring Broadway production of Harper Lee’s To Kill a Mockingbird finds sizzling energy in its dialogue and performances, leaping from actor to actor in scenes of ever-luminous intensity.

This “To Kill a Mockingbird,” which runs Jan. 24-February 5 at the Buell Theater, wasn’t a parade of highlights on Tuesday night. Written by award-winning TV/film veteran Aaron Sorkin (The West Wing, Molly’s Game) and directed by revival king Bartlett Sher (Fiddler on the Roof, My Fair Lady), it takes also many troubles to prove its relevance. The still strong effect of the racist slurs and the uneasy laughter and throat clearing of the almost exclusively white audience during the dialogue of the black actors skillfully announced this.

And yet, at a time when some are trying to justify police killings of innocent black people, or are viewing the George Floyd protests of 2020 as vandal province, the issue needs to be revisited. Sorkin’s normally scathing dialogue addresses it with an avalanche of windy sermons and wise quotes. They invariably start with a sigh, followed by “You know, they say…”.

The Conclusions: The Civil War never ended. Poverty is relative. Children—at least when they grow up to be Truman Capote (on whom author Harper Lee based the young character Dill)—can be insightful. Monsters don’t deserve your pity – and they’re everywhere.

Maycomb, Ala., Atticus Finch (Richard Thomas), attorney Atticus Finch (Richard Thomas), is confidently naïve at first, clinging to the notion that his townspeople are good at heart but are driven by fear and prejudice amid the Great Depression. He is in no hurry to show them the light. He must be persuaded by Judge Taylor (David Manis) to take on the criminal case of Tom Robinson (Yaegel T. Welch), a black man accused of raping a 19-year-old white woman, Mayella Ewell (Arianna Gayle Stucki). to have ). Her despicable father, Bob (Joey Collins), casts a shadow over the proceedings, although no one but Atticus is brave enough to confront him.

The story is broadly faithful to the 1962 book and film, but Scout Finch (Melanie Moore) is no longer the only young narrator. Brother Jem Finch (Justin Mark) and neighbor Dill Harris (Steven Lee Johnson) take turns driving and explaining the story as the trio roam the stage. Seeing them literally weave their way through scenes like ghosts, sometimes commenting but mostly floating around watching, is an odd and not-too-bad choice. It makes Scout’s original narrative literal, but also unnecessarily omniscient.

It’s an interesting idea, both in that Sorkin thinks we need the hand-holding of such a familiar story, but also in the way it pierces the studied realism of adults. It’s a bit of a relief that Bartlett didn’t cast any children. But it’s a constant reminder of brain veined talking.

From the very beginning, and especially on Scout, our narrators sprint through lines that whiz by like noise in a true novel. Moore comes across as a bit like Amy Sedaris in Strangers with Candy, an adult who artificially leans into her childish qualities to show us how jaded we’ve become. Her distinctive, occasionally shaky Southern accent clears the runway for a fleet of questionable touches.

The story begins with the finale, in which the children speculate about how Bob Ewell “fell on a knife,” then rewinds to the events leading up to it. Bogeyman Arthur “Boo” Radley (Travis Johns) is barely mentioned despite his pivotal appearance in Act III, and the action mostly darts between the courtroom and Finch’s front porch in constant, subtle phrase changes.

A veteran of the stage, Harris shines when tasked with his big dialogue and his character’s tragic arc. In appealing to Maycomb’s better nature, he sacrifices his own soul, and you can hear the despondency in Harris’ voice as Atticus realizes this. The fact that Thomas or Stucki (who makes the stage glow as Mayella) has something to give night after night is unbelievable, especially in the demanding court scenes. A screaming match in the third act leaves you amazed at how they don’t constantly blow out their voices.

In contrast, the underused Robinson and Atticus’ maid Calpurnia (Jacqueline Williams) hardly come into their own except in a few characteristic scenes. One sympathizes with director Sher’s commitment to show panache, passion, and pathos amid such uneven performance and shaky blocking. Not much of it hangs in the air until about the second act, and the disjointed, melancholy score is no help. The set is sparse and drab, with a drab color palette and a lighting design that leaves large parts of the stage in dark circles with blurred edges.

The show is funnier than we’re used to, despite being anachronistic in its smoothness. The humor comes from everywhere, not just the antics of the kids. Some feels like odd bedfellows alongside rape and racism, which Sorkin doesn’t shy away from. He’s always searching for the line between guilt and inherited prejudice, and it’s an admirable search. He also not-so-subtly comments on social media mobs and other 21st-century evils, and makes connections with a fat, red Sharpie. As such, this “mockingbird” feels a bit like an idea board drowned in scrawled pages and colorful notes.

In Sorkin’s hands, the show can’t help but have a cinematic pace, adding what feels like an extra half-hour of babble. Somewhere in there is a sleek, energetic game. It’s just hard to see.

Subscribe to our weekly In The Know newsletter to get entertainment news straight to your inbox.