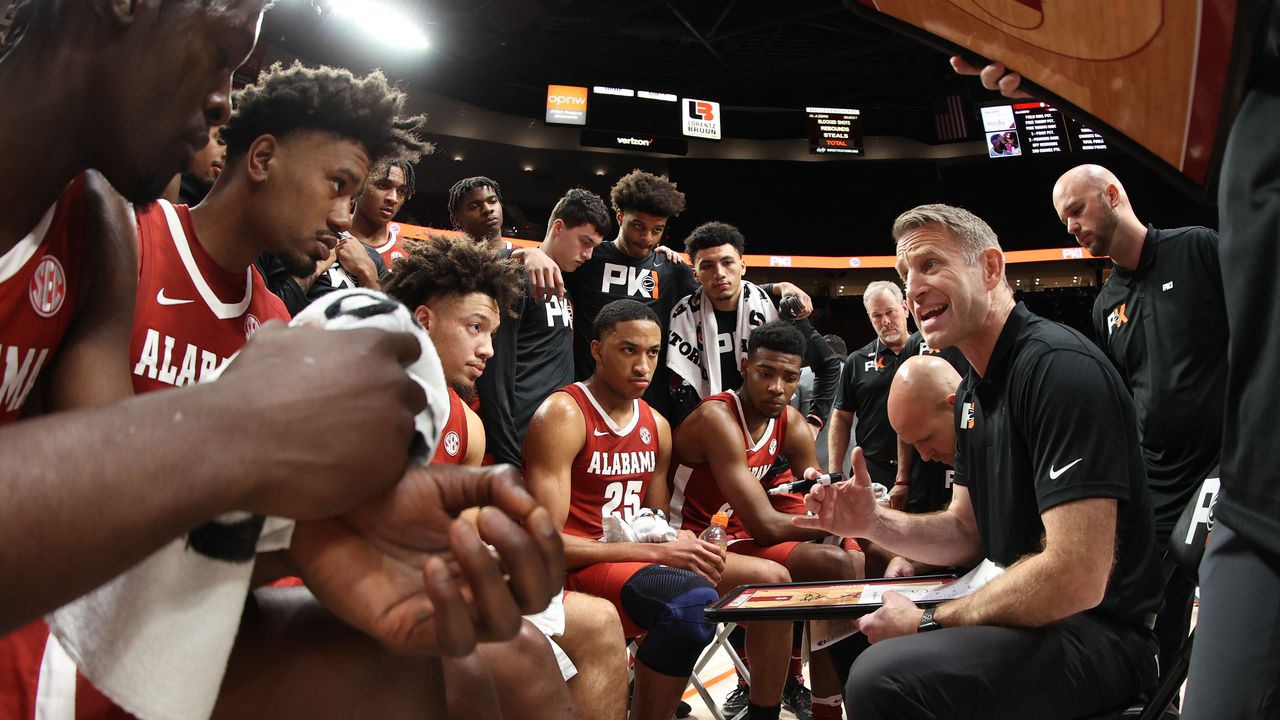 The typical letdown game ingredients are in place for the Alabama Hoops this weekend.

Simply beat the top-ranked team in the country? Check. Long return trip from the west coast? Check. Mid-major next on the agenda? Check.

The Tide showed it can once again compete with the nation’s elite programs when it defeated No. 12 Michigan State and No. 1 North Carolina at last week’s Phil Knight Invitational in Portland, Oregon. But when Alabama hosts South Dakota State at the Coleman Coliseum on Saturday night, coach Nate Oats wants to see something different from his team.

“We told our boys this is a maturing game,” Oats said on Friday. “After a win in four overtime you will have a disappointment game. But the mature group, the mature player, will be ready.”

An inverted Tide team largely reflected last season in the rearview mirror, but fans who rode last winter’s peaks and troughs won’t be forgotten as quickly as victories over top-10 teams at Gonzaga, Houston and Baylor were offset by losses up to mid-majors in Iona and Davidson, and two of the SEC’s worst teams in Georgia and Missouri.

If Alabama (6-1) is on a different path than it was last season, Saturday night will be an opportunity to show it.

“In college basketball, you only get a limited number of games,” Oats said. “For example, we are in seven games. We’re guaranteed 32 games, that’s it. We’re almost 25 percent of the season behind us. We don’t have games that we just throw away. This game Saturday is a big game to see who can mature and play well in the next game.

South Dakota State was one of the nation’s best mid-majors last season, finishing 18-0 in the Summit League en route to a 30-5 finish and 13th place in the NCAA tournament. One of those five losses came in November 2021 at the Coleman Coliseum when South Dakota State was just three points behind Alabama at halftime before losing 104-88.

“Last year’s game was tight up until the middle of the second half,” Oats said. “It took us a while to open it.”

The Jackrabbits lost their two top scorers, including Conference Player of the Year Baylor Scheierman, who joined Creighton, and have lost four of their first seven games this season. They play an eighth game Friday night at Kent State before traveling to Tuscaloosa and playing again Saturday night.

“You’re not afraid to walk with us. You will take three. You are doing a good job. They’re well trained,” Oats said. “They are good. We have to play well.”

Alabama spent more than five days in Oregon, arriving last Tuesday night and not getting home until early Monday morning, hours after beating the top-ranked Tar Heels in one of the three longest games in program history.

“I’ve had two and a half days to recover and I still feel tired, I won’t lie,” center Charles Bediako said Friday. Bediako played 44 minutes in the win in four overtimes, breaking the runners-up’s previous career high of 27 minutes.

Oats gave its players two days off to start this week after playing three games in four days in Oregon, plus four overtimes equaling another half basketball game more than 2,500 miles from Tuscaloosa.

“My sleep schedule got kind of messed up over there because of the time difference,” security guard Jaden Bradley said Friday.

However, Oats has tried to strike a balance by giving his players peace of mind and staying up to date on what they needed to rectify following his journey, including the first loss of the season.

“We’ll see tomorrow night how well we did with that, but I think the boys looked good in practice today,” said Oats. “It looked like they were fresh.”

Rookie striker Noah Clowney attended “a little bit” of Friday’s practice after leaving Sunday’s game with a “pretty bad” bruise to his lower back from a hard fall.

“He had tingling in his legs for most of the North Carolina game. I definitely couldn’t get into that game,” Oats said. “We’ve been holding him up for most of this week trying to see if he can walk. He will be a game changer.”

Forward Dom Welch, who has yet to play this season, remains day in and day out with a calf injury.

“It’s a kind of injury that takes a long time to heal, if you will,” Oats said of the St Bonaventure transfer.

Mike Rodak is an Alabama beat reporter for the Alabama Media Group. Follow him on Twitter @micerodak.