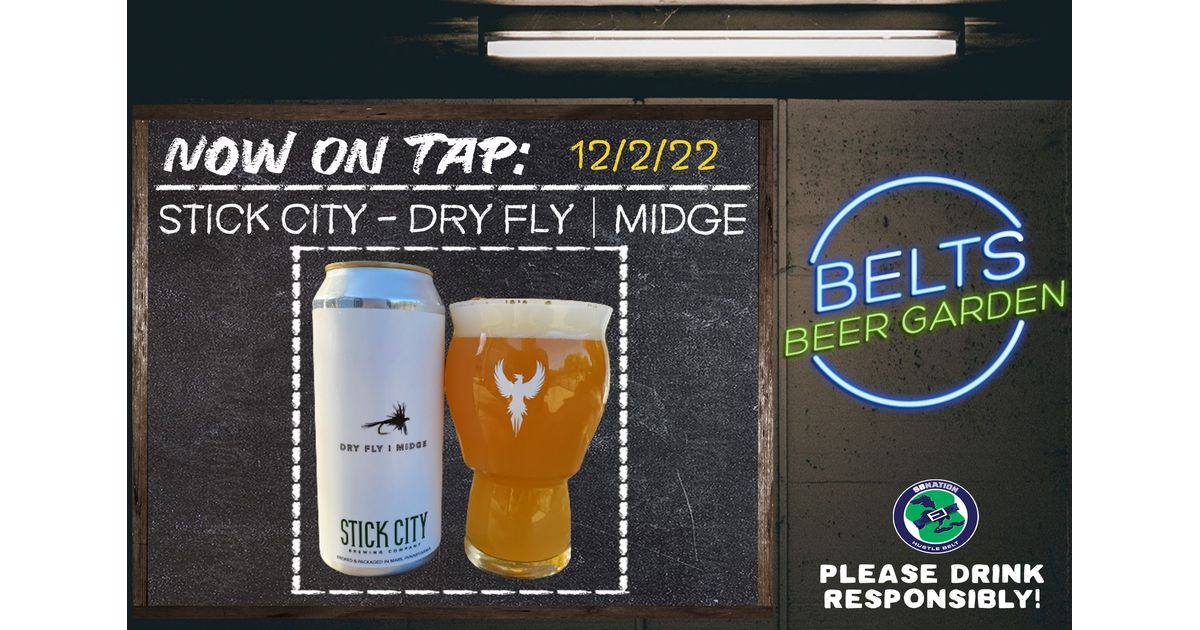 Humanity has had its sights set on Mars for some time. And while *some* look up to the sky afterwards, we beer geeks look to Pennsylvania.

Mars, Pennsylvania, a small community of 1,700 people located about 25 miles north of Pittsburgh, is home to Stick City Brewing. Branded with the Eastern Hemlock Tree (Pennsylvania’s state tree), the family-run brewery believes in making their local community and the world a better place. That’s why they’re a member of 1% for the Planet and donate AT LEAST 1% of all profits to environmental nonprofits.

Today I have their Dry Fly｜Midge – a double IPA named after the small midge fly used to lure trout to the surface. Brewed with barley, oats, and a combination of Strata and two other unnamed hops, Dry Fly boasts a solid 8% ABV. It was on the pricier side, $8 a single can, but from what I’ve heard about these guys, it’ll be worth it.

Midge poured a cloudy golden straw color with some burnt orange tones popping up in the middle. About a finger of off-white heads crowned it, but quickly fizzled into a thin ring around the rim of the glass, with some solid lines of lacing encircling the glass on the way down.

The aroma was tropical and juicy with massive notes of strawberry, melon and peach leading the way. Some earthy notes of grass, pine and herbs hide behind the fruit. Finally there’s an oatmeal quality that sits quietly underneath and brings it all together. Each sip started out with a slightly creamier and thicker mouthfeel that thinned out after a moment or two. Flavors started crashing right away, with big fruity notes hitting my taste buds.

It was the peach that led the way with some super juicy qualities. The berry flavor came second, joined almost immediately by a large splash of strawberry. The honeydew melon that was in the flavor was more hidden in the taste, peeking out here and there but very inconsistent. After a brief moment of fruit dominance, the earthier hop qualities slowly began to emerge. It was a combination of sage, pine and a slightly resinous lemongrass that took the tropical flavors down a notch.

The secondary flavors bring a slight hoppy tinge to the brew, just a quick reminder that this is a double IPA. But it quickly fades when a brief entrance of oats and barley adds some grainy notes. From there, the Sud ends wonderfully clean. A slightly sticky residue remains, leaving a hoppy strawberry taste on the tongue for a few moments. But other than that, there is no lingering dryness or aftertaste with this double IPA.

Overall, Dry Fly was insanely smooth and crushable. The flavors would pop for a brief second before fading and being able to hit the next wave. There was no real bitterness, just that little hop sparkle in the middle, and all the flavors all blended quite well. It was a very session ready DIPA and well worth the $8 I paid for the single can. My first visit to Stick City Beer was delightful and I can’t wait to find more of their stuff.