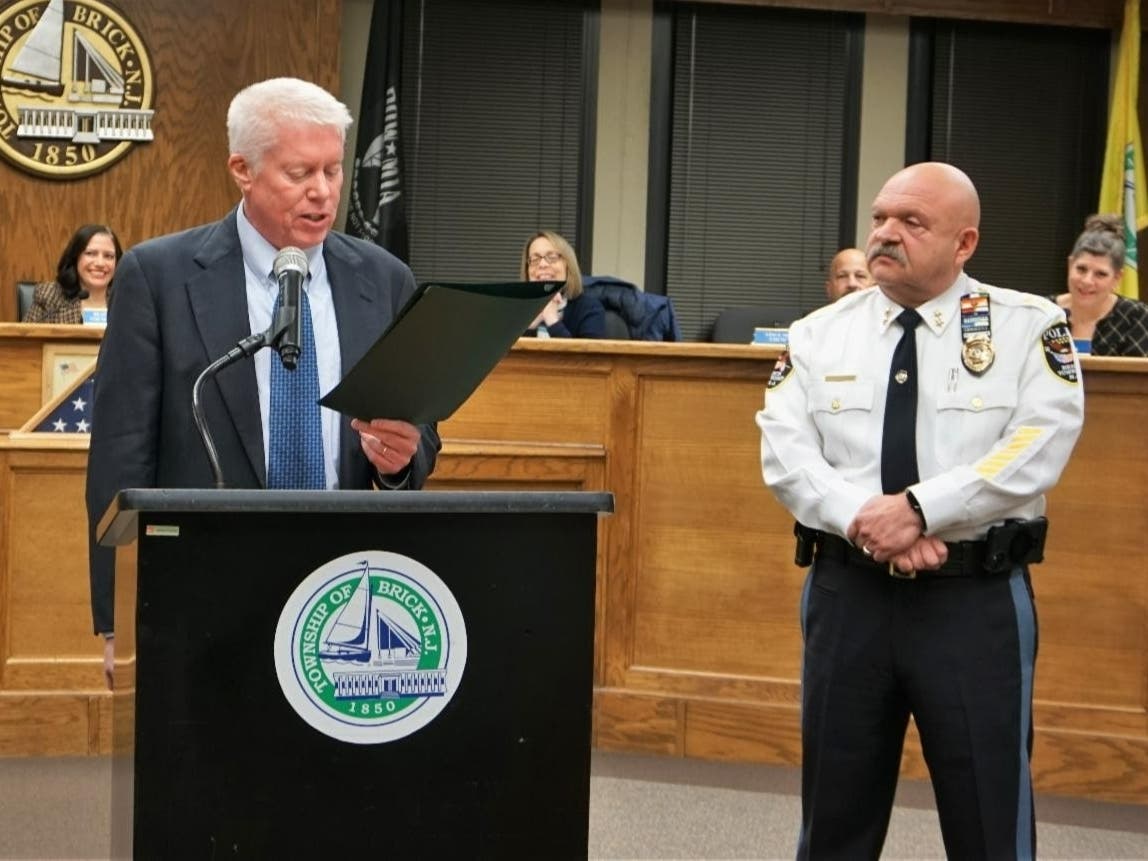 BRICK, NJ — Brick Township Police Chief James Riccio was honored by Mayor John Ducey and the Township Council Tuesday night as he prepares to retire after seven years at the helm of the department.

Riccio’s final day is Jan. 31, Ducey said in a note honoring the boss, who has served at the department for more than 36 years.

“This is a bittersweet night, but a great night. It’s a great day for Chief Riccio and his family, but a tough day for us in Brick Township,” said Ducey. “I want to thank you for all your hard work. You really made my time as mayor a lot easier by keeping our city and residents safe.”

Riccio was born in Bayonne, where his grandfather was a police officer and his father was a fire department battalion commander, and moved to Brick Township as a teenager, Ducey said.

Riccio, who was a volunteer with the Breton Woods Fire Company, joined the Brick Township Police Department in August 1986. Throughout his career, he has served in almost every capacity in the department and has had specific assignments, including assignment to the Ocean County Narcotics Strike Force and serving as the unit commander of the Brick Police Department’s Drug Enforcement Unit.

Riccio served in the department’s internal affairs branch until 2004, when he was assigned a special assignment by prosecutors investigating corruption in government agencies.

In June 2005, Riccio became part of the FBI task force investigating allegations of official corruption and was eventually tasked with the investigation known as Operation Bid Rig.

During his tenure as chief, Riccio revived the Selective Enforcement Team now known as the Street Crimes Unit – he had served in the original SET in 1988. The department also started the Blue Hope program to help addicts get treatment; the Neighborhood Watch program and patrol the districts within the community to build community relationships between residents and officers.

“It’s very bittersweet,” Riccio said of his retirement. , noting that the department was fairly new when he started. “Police work was very different.”

“I have witnessed many tragedies throughout my career. I’ve seen people at their worst and at their best. As difficult as a career in law enforcement can be, it can also be very rewarding when you or your partner is able to save a life or help someone in need,” Riccio said.

Riccio thanked his family for supporting his career. He also commended Ducey and the local government and council for their support of the department.

“I’ve said it many times over the years: this mayor and this council are doing everything in their power to support our cause and what we do, and they genuinely care about this community,” Riccio said. “I have served under a number of mayors and some councilors in my time. What I can tell you is that the support and work we are doing together is amazing.”

Riccio also praised the police department officers, saying, “The support I have received from these men and women has enabled me to move the department forward.”

“Because of your leadership, we have the best of the best,” said Ducey.

Do you have a comment, a question or a news tip? Email [email protected]