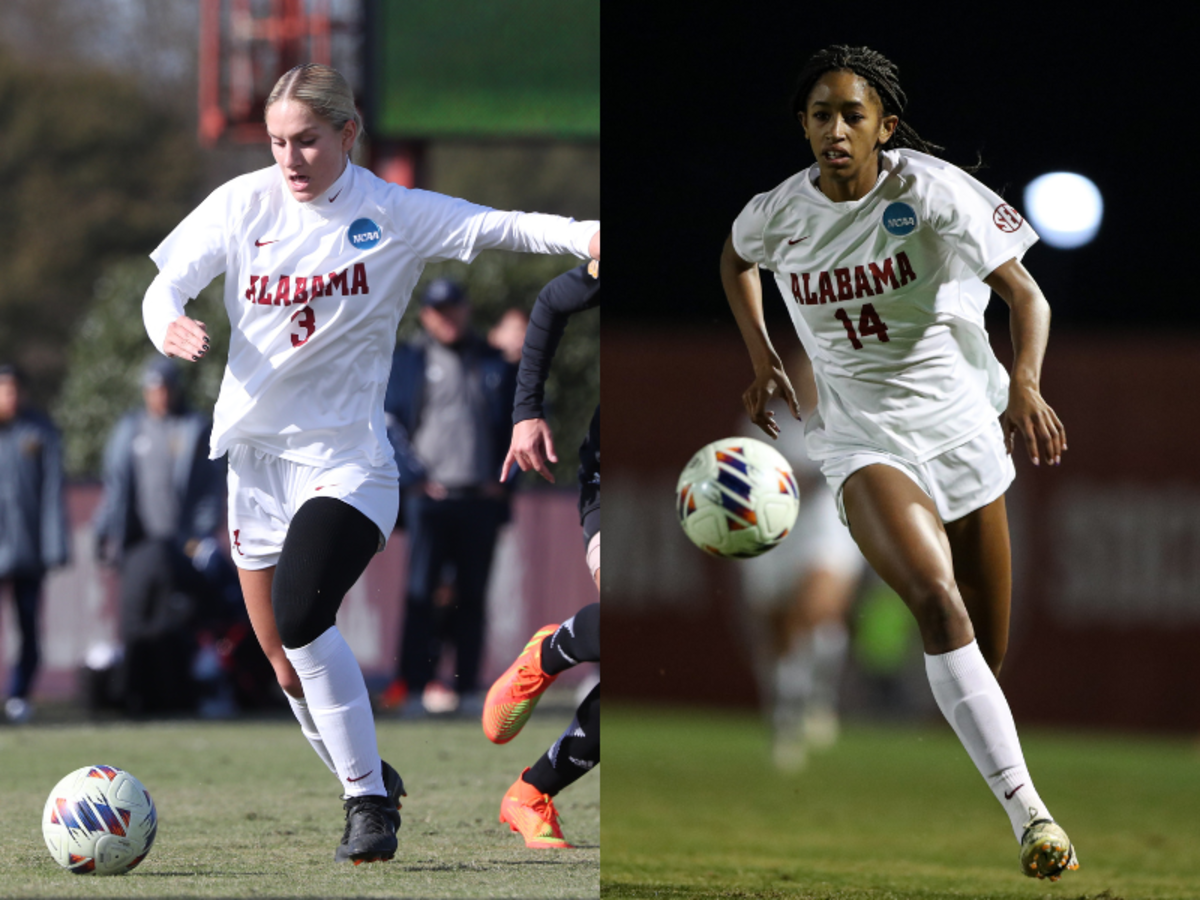 There is no substitute for it. It is one of the few factors a player needs to be successful that cannot be acquired through training or study. It only comes when you endure a challenge and live to tell the story

It makes sense that experience can be a cruel teacher: it gives you the test first, then the lesson.

While this is Alabama’s first time in the College Cup, the semifinals of the NCAA women’s soccer tournament, coach Wes Hart’s team has no shortage of experience when it comes to playing in a big way.

Looking at the roster, Alabama has four juniors, seven seniors and six players using their grad eligibility. Some, like Riley Tanner, McKinley Crone and Ashlynn Serepca, are transfers after finding success at previous schools. Others, like Riley Mattingly Parker, Felicia Knox, and Kat Rogers, have called Tuscaloosa home throughout their college careers. Being able to rely on strong veteran play is an advantage, and it’s even more impressive that each of the above players were on the list when Alabama defeated Clemson in last year’s NCAA tournament before losing to BYU.

This season, the team will already go down as the best in program history, but there are two players who play key roles this season and weren’t involved in last season’s success. In fact, prior to this season, one player only played three games before suffering a season-ending injury, and the other was a senior at a high school over 1,000 miles from Tuscaloosa. But her lack of college experience hasn’t slowed her down; Instead, both are now key pieces to what could be a championship team by Monday night.

They are forward Gianna Paul and defender Brooke Steere.

“I was so intimidated by everyone who came into this season,” Paul said of settling into the senior division. “I knew how talented they were. I only heard positive things when I saw her on TV. You could just tell how great they were.”

The Huntingdon Station native, New Yorker, came to Alabama after a successful career at Walt Whitman High School: two-time all-county honors, Offensive Player of the Year Award and a Conference Championship, not to mention a two-time state champion. While she might have been intimidated at first, eventually the transition from high school to college was seamless.

“I thought the transition was going to be a lot harder than it was,” Paul said. “But having such a cohesive team that gets along so well made the process so easy.

“There [the upperclassmen] are all such good people, it made it so much easier to get to know them and get used to the team.”

Paul’s transition was smooth overall, but that wasn’t quite the case with Steere.

The Dexter, Michigan native came to Alabama during the 2021 season, but she only played three games before an injury sidelined her for the remainder of the season.

“I’ve had a lot of interesting things happen in my right shoulder,” Steere said, laughing. “I had a lot of sprained ligaments and a few tears, so I had to have surgery.”

As if that wasn’t hard enough, Steere came to Alabama as a forward, but before the start of the 2022 season, the starting XI center-back became unavailable (head coach Wes Hart said so during Monday’s College Cup press conference), ultimately leading to that Steere made the switch from scoring to defending.

“While it was definitely a change back then, I wouldn’t want it any other way than how it’s happening now,” Steere said.

Looking at defensive performance, that decision was right, as Steere has been in the starting XI in all but four games this season and Alabama has one of the best defensive lines in the country, led by SEC Defensive Player of the Year Reyna Reyes, and includes as well Sasha Pickard and Gessica Skorka.

“It was absolutely amazing to go from cheering on the team to being the center of the action,” said Steere.

But Steere does more than hold her own among the veterans: She plays all over the field and has stopped a number of opponents’ chances to score. She gives much credit to the veterans who surround her on defense, particularly Pickard, who she said has been a mentor to her.

“Being a central defender in our team is very different from being a full-back just because our full-backs are very offensive as well as defensive,” said Steere. “Gessica helped me a lot but it’s more of a full-back and centre-back thing because Sasha is also a centre-back.”

It wasn’t hard for Paul to guess who her mentor was: SEC Forward of the Year and All-SEC First Team pick Riley Mattingly Parker.

“I don’t think I’ve ever met a better player or person in my life,” said Paul. “She’s just one of those people you want to be with because her energy is infectious.”

Paul went on to share how she told her mom, Parker’s mom, and even Parker herself how much she loves the SEC’s top scorer. She also shared how Parker came to summer training and often participated.

Though she may be Parker’s mentee, Paul has made more than her mark this season, using her speed and athleticism to ravage opposing defenses.

“As soon as I step in it’s a bit of a shock to the other team’s defence,” said Paul. “It’s a little extra pressure that forces their defense and goalkeeper to make quicker decisions.”

Currently, the freshman forward has eight goals, tying the third most on the team, and five assists, and she’s garnered nearly every award imaginable, including SEC Freshman of the Year, All-SEC Second Team Selection, and an SEC All-Freshman selection.

Such a success would lead you to think that Paul is a rookie, right? think again Paul has only started eight games for Alabama, but she actually prefers her role as a top reserve and understands the tactical advantage she offers as someone who can change the pace.

“The whole team is like, ‘Oh hey, she’s in! She’s in! Everyone’s ready!'” Steere said of opposing teams as Paul prepared to step into the game.

The success wasn’t without its challenges for Paul, who said she had to adapt to the physicality of the conference.

“When I got involved here, I didn’t realize how physical the SEC was,” Paul said. “When I started watching the movie about SEC football playing ACC football, I had to mentally prepare for it.”

Although the competition has been fierce, both Paul and Steere say the most intense moments come in practice. It makes sense; Not every team has a handful of all-conference players. In some ways it can be harder to face off in training than opponents in games.

“We try quite a bit in training and because our level of play in training is so high it’s pretty easy to keep up with the competition when we come into play,” said Paul. “Our team training is almost at game level.”

Steere also shared that she and Paul often went toe-to-toe in training and how tough the defense is because they’re up against the best in the country in practice.

“Our defense can’t be good because we have it [SEC] Striker of the year, freshman of the year, and you go up against them in practice,” Steere said. “There were definitely a few times where we had some 1-on-1 scrums.”

Her humility precedes her, but let it be known that Steere is one of the top young players in the SEC, as evidenced by her SEC All-Freshman selection, an honor she’s earned for a position that never played before this season.

“I just came into this year and I was like, ‘Okay, we’re going to figure out this position.’ Not that I wasn’t expecting anything from it, but it wasn’t anywhere near where I thought I would be,” Steere said.

According to Steere, earning the selection was a moment where she thought, “Wow, I can do that!” and she rejoiced in the honor.

Now Paul and Steere will soon be competing in the College Cup, where there will likely be some adversity. Fortunately, they faced adversity throughout the season and the best example was their quarter-final game against Duke, where the 2-0 lead was gone in minutes and then regained when Reyes scored a crucial goal.

“Every time our team goes down or something happens, it’s like this our team, not the people who did it,” Steere said. “Everyone’s trying to educate each other and the veterans do a better job than everyone else because they know exactly what’s going on.

“Having them there and just saying, ‘Ok, it doesn’t matter, let’s go,’ was such a quick turnaround because of them.”

Paul and Steere have shown great composure throughout this historic run, but there are times when a more experienced player is needed to break through the chaos. This team has that, which is Parker and Kat Rogers, another graduate player.

“Both Riley – especially Kat – are doing a good job of putting you back in the game,” Paul said. “Between the two, Felicia, Reyna, all the older girls on the team do a really good job of helping you focus on what’s really important.”

Another person whose leadership was crucial – Wes Hart. Goalkeeper McKinley Crone has already shared her appreciation for Hart as a coach and both newcomers echoed those thoughts and expressed their delight at playing for their head coach.

“He was just great,” added Steere. “I think he placed everything so perfectly. We always joke with him off the field, he’s always there. He just creates a fantastic environment and his coaching style is perfect for what we need.”

Hart spoke about Paul and Steere’s success as freshmen during Monday’s inaugural coaches press conference and shared how beneficial it is for them to find success early in their careers.

“The fact that they’re getting it now, I have to believe it’s going to help them when they’re juniors and seniors,” Hart said. “I think it’s great for them to see success at such a young age and play such a pivotal role.”

Paul and Steere were indeed key players for Alabama, and if the Crimson Tide are to win the national championship, they need excellent play from their two outstanding freshmen.

Get your Crimson Tide tickets from SI Tickets HERE.

How to watch Alabama Soccer vs. UCLA at the College Cup

BamaCentral at the College Cup: Day 2