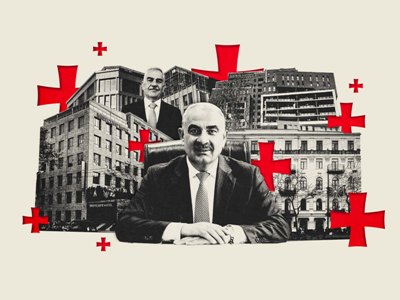 The Organized Crime and Corruption Reporting Project (OCCRP) found evidence that Turkish businessman Emin Uchar made his fortune working for the family of Vasif Talibov, who ruled Nakhiyevan for 27 years, while investing his corrupt money in Georgia’s hospitality industry would.

“Across the street from the Opera House in the Georgian capital of Tbilisi, well-heeled regulars enjoy local and international cuisine at upscale Dinehall, whose motto is ‘Good food is a human right’. A five-star hotel is being built nearby in partnership with French hotel giant Accor.

The hotel and restaurant are part of a $270 million business empire in the small Caucasian country that’s run — on paper at least — by a Turkish national named Emin Uchar. But OCCRP has uncovered evidence that Uchar likely served for years as a frontman for the family of Vasif Talibov, who was the autocratic ruler of a remote region of Azerbaijan for 27 years until he abruptly resigned on December 21,” the investigation said .

Emin Uchar’s lawyer denied that his company’s assets belonged to the Talibov family and claimed that the company’s sources of finance were loans. Accor said it was reviewing its relationship with the Turkish businessman following recent reports of links to Talibov.

In February 2022, OCCRP exposed Uchar’s ties to the Talibov family, whose regime silenced independent media, forced dissidents into mental hospitals, and controlled the beating and torturing of prisoners. Reporters also discovered that Talibov had amassed a fortune during his tenure, despite his official annual salary being just $26,000. OCCRP notes that the corporate network, which includes several companies known as Gamigaya in Azerbaijan and Maqro Group in Georgia, has also won dozens of government contracts in Azerbaijan since the first firms were established in the early 2000s.

However, Talibov’s fate has deteriorated sharply in recent weeks as the patriarch resigned as head of Nachievan amid political repression by the central government of Azerbaijan.

A week after Talibov’s resignation, Gamigaya was renamed “Arkoz”, the name of another Uchar-affiliated company. Human rights organizations have long claimed that the Talibovs control Gamigaya, but information about the company’s ownership in Azerbaijan is not disclosed, making it impossible to prove this claim.

However, a former Gamigaya employee told OCCRP he observed Uchar taking orders from the Talibovs when he worked in security for the company. “They just entrusted him with Gamigaya Holding. But everything was done according to Vasif Talibov’s instructions,” Nadir Mammadov said in a video call from Germany, where he settled after fleeing Nakhchivan after being beaten by the police.

The law on trade secrets in Azerbaijan has kept information about shareholders secret from journalists and citizens since 2012. It is impossible to find out the names of the shareholders of the companies. But documents found by investigative journalists prove Uchar’s connection to Talibov.

In January 2012, the former head of Nachievan Batumi visited, a month later his eldest son Rza Talibov bought real estate there for $ 1.5 million. Journalists found a document signed by Rza Talibov, in which he instructed Emin Ucharu to buy real estate for him in Batumi.

In the summer of the same year, Rza received another certificate for two months to buy another plot of land next to the purchased historical building. Two years later, a five-star hotel, Divan Suites Batumi, will open in this historic Batumi building that Rza Talibov put up for sale for $18 million late last year when the central government of Azerbaijan in Nakhiyevan began massacring the workforce.

Meanwhile, the Maqro company in Tbilisi owns the Green Budapest apartment complex, and a larger facility called Green Diamond is under construction for $120 million. A Swissôtel hotel is being built with the French company Accor. They have two other hotels in the old center of Tbilisi: Mercure, which opened in 2015, and Ibis, which has been hosting guests since 2017. Sandro Kevkhishvili, an expert from Transparency International, said that investing money from possible corruption in Azerbaijan in Georgia carries risks related to corruption in Georgia. “A person who accumulates wealth through corruption will try to use the same methods in the country where they invested that money – especially if the country does not have strong anti-corruption mechanisms and a decision-making system to reduce these risks,” he said said in an interview in Tbilisi.