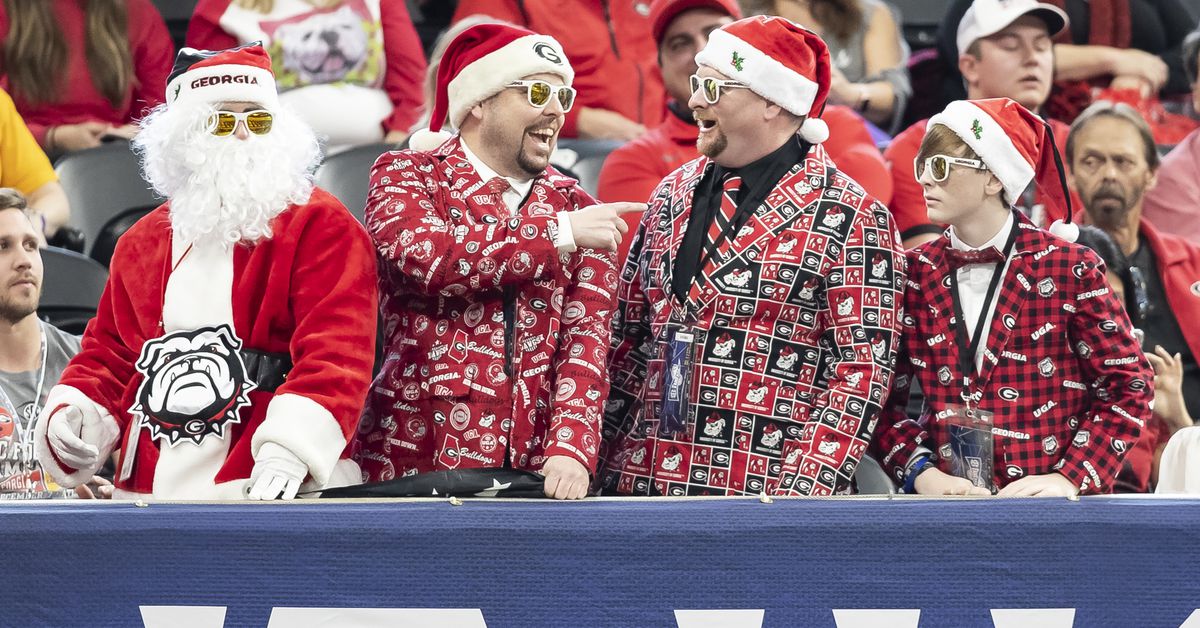 Past is past. Regardless of what happened last week. All that matters is that the LSU Tigers are playing for an SEC championship this Saturday and the only team standing in their way is the Georgia Bulldogs, 12-0.

Since LSU only plays them every few years, we don’t know all that much about this team, so we’ve got Macon Dawg from DawgSports here to answer our questions. No matchup questions or X’s and O’s, but the REAL questions we want answered.

1. Wow, you all have nerves. You won the national title and then decided to go out there and STILL be good? Why didn’t you do the two years after the title slump where you fired the coach like we did? I thought we all agreed on that! Auburn did it ten years ago! But now you are fair too good for the rest of us? Alright, I see how it is.

It’s important to remember in this context that Auburn is the anti-Georgia. The schools’ fan bases are essentially indistinguishable, Auburn is literally a stone’s throw from the Georgia state line, and Auburn students have in common with Georgia students that they all wanted to go to college in Athens. I like to think of the Tigers as the Bizarro Superman version of Georgia.

Consistency is what Georgia does best. We’re the plaid, button-down, khaki-ass fanbase in the SEC. Ray Goff was consistently bad. Jim Donnan was consistently good, but not as good as Florida or Tennessee. Mark Richt was very good throughout, although not quite as good as Nick Saban. And if we obey this universal law, Kirby Smart will keep the Bulldogs playing at a boringly spectacular pace for two decades. Our pastor would probably want us to apologize for that, and we will, but secretly we’re pretty giddy.

2. Look, you proved last year that you don’t have to win an SEC championship game to win a national title. Why don’t you take a week off and rest? There is no need to be physical and violent about it.

Honestly, we just want to see what accent Brian Kelly pulls out this time. I bet solid and unsurprisingly defeated Brian Kelly sounds like some sort of satire of drunk Yul Brynner and The Rock. I can barely wait for it.

3. Yes, Kirby Smart won many games, but he also never came closer than 20 points to beat LSU. What tips and tricks do you think he’s developed over the last three years that can help him coach a game against the Tigers competitively?

Sure, a list of five-star recruits is nice. But I’m pretty sure what it takes to turn LSU into a delicious gumbo of defeat is handing control of your offense to a 5ft 10 future insurance salesman old enough to relate to the Clinton – Government to remember.

4. Stetson Bennett IV is a good quarterback, but do you think a guy who’s been playing football this long can keep his body in top shape for three more games? Can Georgia really get away with not giving him a DNP rest game or two like Tim Duncan did in 2012-16?

Stet the Jet is still in the developmental stage most of us were in when we returned to college to play the alumni versus active flag football game. He’s as fast as he was three years ago, it just takes a little bit more to recover.

Stetson Bennett bringing a bottle of Pappy Van Winkle 20 Year Old straight into the dome is one of the best victory celebrations I’ve seen. Just a $4,300 bottle of bourbon. #Legend pic.twitter.com/tn7siZtZKt

As long as he has his pappy, he’ll be fine.

5. This is the fifth time that LSU and Georgia will face off in the SEC championship game. We need to play each other six more times to surpass Alabama-Florida as the most common matchup. Can we please agree to this and oust these two jerks from the top?

had a lengthy discussion with someone earlier this week about why Georgia fans and LSU fans seem to get along so well. Part of it is that we balance each other out and understand that the other is strange to us, but hey, the world revolves around all kinds of guys.

For example, it never ceases to amaze me that the fanbases most commonly cited as terrible hosts #online are Georgia and LSU. In my experience, nothing could be further from the truth. My only trip to Baton Rouge involved a drunk Cajun in purple jumpsuits stepping out of the trees and telling me, “Hey, we’re going to kick your ass today!” He did so as he jabbed a finger into my chest. Before I could think about what was going to happen, he looked me straight in the eye and said, “Are you hungry? Come on, get something to eat.” I don’t know what was actually in that pot, but it was great.

I think it also helps that when the Bayou Bengals and Bulldogs met on the field, it was usually when both teams were pretty good. It feels bad to lose badly on arrival. It hurts in the short term to lose to a good football team that you only see occasionally, but it’s bearable.

We also have years of this “enemy of my enemy” dynamic that continues with Georgia consistently campaigning for LSU to give Florida an SEC loss and LSU campaigning for Georgia to give Alabama what is due to them.

And the physical separation doesn’t hurt. I’ve never had an LSU fan cut me off in traffic in Atlanta, which is saying something because I recently narrowly avoided injury from a Yahoo with an SMU/Alabama “house division” makeup tag. Unlike most LSU fans, I never want to meet this guy in person. So yes, let’s continue with two good head coaches and two solid rosters for the foreseeable future. We’ll let you all win a win or two, I promise, just not this year.