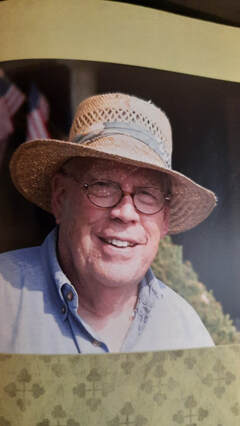 Earle H. Grover of Brookfield Farm, 1041 Valley Road, Quarryville, Pennsylvania died peacefully Tuesday, January 24, 2023 at the Quarryville Presbyterian Retirement Community. He was the son of Robert Edward Grover, a licensed electrician from Solomons, Maryland, and Lenore Heidelbaugh Grover, a high school teacher who taught Latin, math, and English.
A graduate of Ephrata High School, Mr. Grover continued his education at Juniata College, where he received a Bachelor of Arts degree in vocal and instrumental music. He wasted little time in devoting himself to a life of service as a teacher. In 1952, he joined the faculty of Mercersburg Academy in Mercersburg, Pennsylvania as director of music education, a position that showcased his artistic creativity and organizational skills as leader of the Football Marching Band, the Assembly Band, and the “Blue and White Melodians,” a Dance band in the “Big Band” sound. He soon assembled a 35-piece concert band to perform classical and light classical music at the school’s spring concert. Without pausing for breath, he formed a vocal group called “Octet” and prepared the 85-voice glee club for this annual celebration of Mercersburg’s musical life.

Mr. Grover’s career at the school has been a remarkable development. The first recipient of the Robert R. Black Faculty Summer Scholarship and already an accomplished pianist, he majored in pipe organ playing and German language and literature at Columbia University, where he received a Master of Arts in two disciplines in 1961. He later majored in German at the New School for Social Research. In 1964, after more than a decade as the “music master” of Mercersburg, he decided to become a full-time German teacher.
As a German teacher, as he had been as a music teacher, the hallmark of all his endeavors was a rare combination of exuberance and excellence. His teaching was as exciting as it was challenging, a clear reflection of Earle Grover’s energy, wit and panache. They were also, for 40 years, an unfailing reflection of the disciplined work ethic he sought to inspire in the lives of his students. Over the years, to the amazement of his students and the admiration of his colleagues, he managed to return quizzes and tests the next day!
In due course he was appointed chairman of the foreign language department. In 1981 he was appointed to the Robert Black Chair, the first recipient of that honor. In 1991, he received the Alumni Council Award for Outstanding Service to Mercersburg in recognition of his 40 years of dedicated service as a teacher, dorm dean, dance committee advisor, and inspired leader of a notable music program.
The lasting contribution to the lives of its students was reaffirmed in 2010 with the establishment of the Earle H. Grover Endowment Fund, a resource to support Germany immersion opportunities for Mercersburg students. The fund was made possible by an initial donation from Dr. J. Laurence Ransom, a member of the Mercersburg Class of 1965, who wanted to thank and honor the brilliant teacher who had done so much to shape his career. Such a memorial to Mr. Grover is itself a permanent reminder of Henry Adams’ observation that “a teacher affects eternity; he can never tell where his influence ends.”
In 1992, Mr. Grover retired to his beloved 113-acre mansion “Brookfield Farm,” the homestead founded by his great-grandfather in 1780. Thanks to Earle Grover’s tireless efforts to renovate this home while maintaining its architectural integrity, Brookfield Farm has become a celebrated local landmark and Lancaster County treasure. In keeping with his commitment to local history and family tradition, Mr. Grover chose to preserve ‘Brookfield’ with the Lancaster Farmland Trust. Retiring to Quarryville after his Mercersburg days, he used typical Earle Grover wit to praise the bucolic quiet of his ancestral home, noting that it promised “considerable security with optimal concealment.” In fact, he was often heard to say, “Brookfield is my sanctuary,” which he shared with his at the end of his teaching life Charles Eugene Hizette, a staunch friend of 50 years, another accomplished teacher, and honored chair of the high school language department, whom Earle first told me about when they were students together at Columbia University.
A private funerary service is held at Middle Octorara Presbyterian Cemetery. In lieu of flowers, donations may be made to the Earle H. Grover Endowment Fund at Mercersburg Academy, Mercersburg, Pennsylvania.
Arrangements of the Reynolds and Shivery Funeral Home, Quarryville, PA.