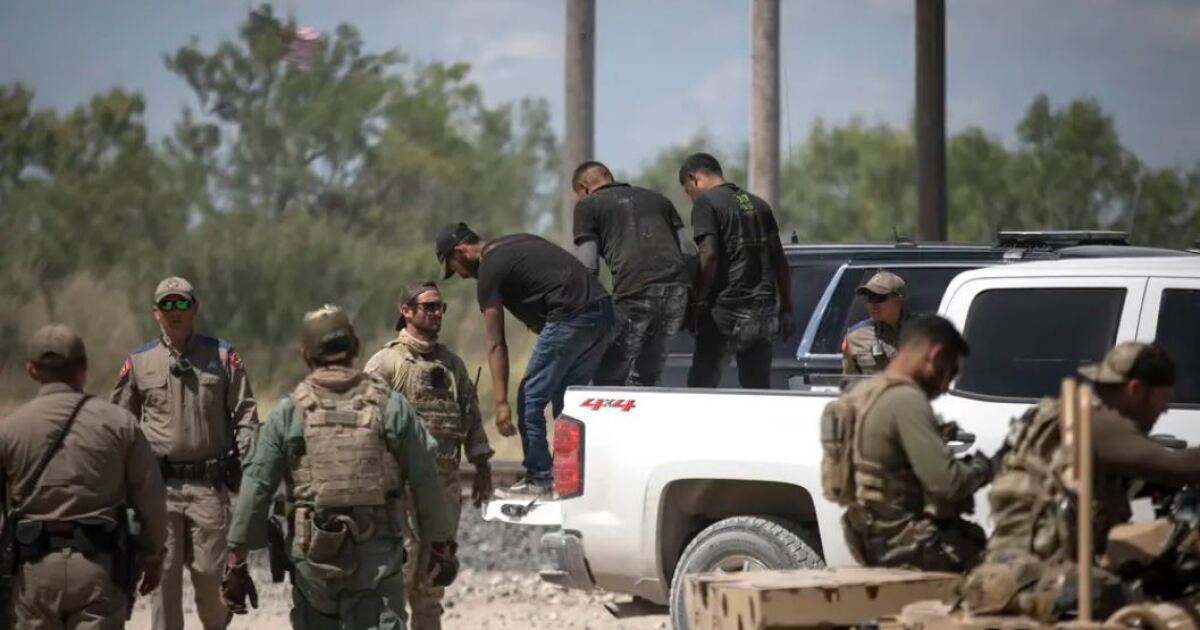 Many of the thousands of migrants arrested for trespassing under Gov. Greg Abbott’s border security operation were only jailed in Texas jails after US Border Patrol agents turned them over to state police, according to a new complaint with the US Department of Homeland Security.

On at least one occasion, officers with the Texas Department of Public Safety did not even see the arrested migrants at the scene of the alleged trespassing, but were picked up by federal agents at a gas station and taken to jail, the American Civil Liberties Union of Texas reported Friday in its letter to federal officials .

The Texas ACLU argued that federal government officials should not support Texas’ controversial “arrest-and-jail” approach by turning migrants away to face state charges instead of handling their immigration cases.

The complaint stems from an analysis of police reports of more than 350 trespassing arrests made this summer as part of Abbott’s Operation Lone Star. A quarter of those arrests occurred with Border Patrol involvement, the civil rights organization said, with federal agents sharing surveillance information with state police or both agencies working side-by-side, and dividing migrants for arrest or immigration processing largely on the basis of their gender.

Dozens of migrants in the sample analysis were detained by border guards who turned them over to the DPS.

In its complaint, the Texas ACLU asked DHS to investigate and stop the Border Patrol’s involvement in “unlawful, discriminatory and anti-immigrant” arrests for trespassing. The organization’s lawyers argued that federal agents had neither the right to assist in arresting migrants on state charges, nor to give them priority over state arrest over immigration processing.

“Border Patrol agents are currently instrumental in running this program in Texas, which engages in rampant civil rights abuses, reinforces the anti-immigrant system, and seeks to supersede federal immigration policies,” the attorneys wrote in their complaint. “DHS should cease all collusion with state and local officials [Operation Lone Star] arrests for trespassing and transparently and publicly expressing a non-collusion policy.”

Representatives for Abbott, DPS and U.S. Customs and Border Protection did not immediately respond to questions about the complaint Friday.

As the number of people crossing the Texas-Mexico border skyrocketed last summer, Abbott ordered DPS soldiers to begin arresting migrants suspected of crossing the border illegally for trespassing. He saw the state indictments as a way of bypassing federal jurisdiction over immigration law and locking up migrants, often arrested on private ranch lands or railroad yards, in Texas jails.

Since then, state police have arrested more than 5,600 migrants for trespassing, according to the DPS. (Federal data from August showed the number of encounters with migrants at the border was higher than before Operation Lone Star began.)

Police were ordered to only arrest men traveling alone, which routinely resulted in border police processing women, children and families in a group of arrested migrants, while the DPS took in the single men.

The Texas criminal justice system for migrants has since been impacted by court cases and a US Department of Justice investigation into documented wrongful arrests and illegal detentions, as well as allegations of discriminatory and unconstitutional practices. Many men languished for months in Texas jails converted to state prisons for immigration-related crimes without attorneys or a chance to see a judge.

But while DPS data through October shows state police have made fewer arrests overall for trespassing in recent months, the program is still expanding into new counties along the state’s southern border.

Last year, cops made the arrests primarily in Kinney County, a conservative rural county where, despite its tiny court system, local officials were eager to jump into the new penal system, leading to repeated violations of state laws on due process and speedy trials. Now state police are arresting migrant trespassers in other border counties, including Democratic stronghold Webb County.

According to the complaint, border guard agents are often used there to make arrests.

In its analysis of police affidavits of arrests from late July through late August, the Texas ACLU said 29 of the 368 DPS arrests it examined came after border patrol officers arrested the men when the DPS was not on site at all. The complaint listed several examples from Webb County, including an August arrest in Laredo, where DPS met a Border Patrol agent at a gas station to arrest men federal officials said had been arrested at a private ranch.

“[Border Patrol] Agent Kuopa spotted them, arrested them, took them into custody and handed them over to us at the Pump N Shop gas station,” DPS trooper Juan Antonio Juarez III wrote in his arrest report. “After receiving this information and knowing that the individuals were on the property without the owner’s consent and therefore were criminally trespassing, I decided to inform the agent that we would be taking all 3 male individuals for criminal charges. “

It is not known when or if DHS will investigate Friday’s complaint or make any changes. In July, The Texas Tribune and ProPublica reported that the US Department of Justice was investigating Operation Lone Star after Congressional and Texas Democrats, along with civil rights groups, complained that the unauthorized arrests unlawfully discriminated against migrants because of their race, color or national origin .