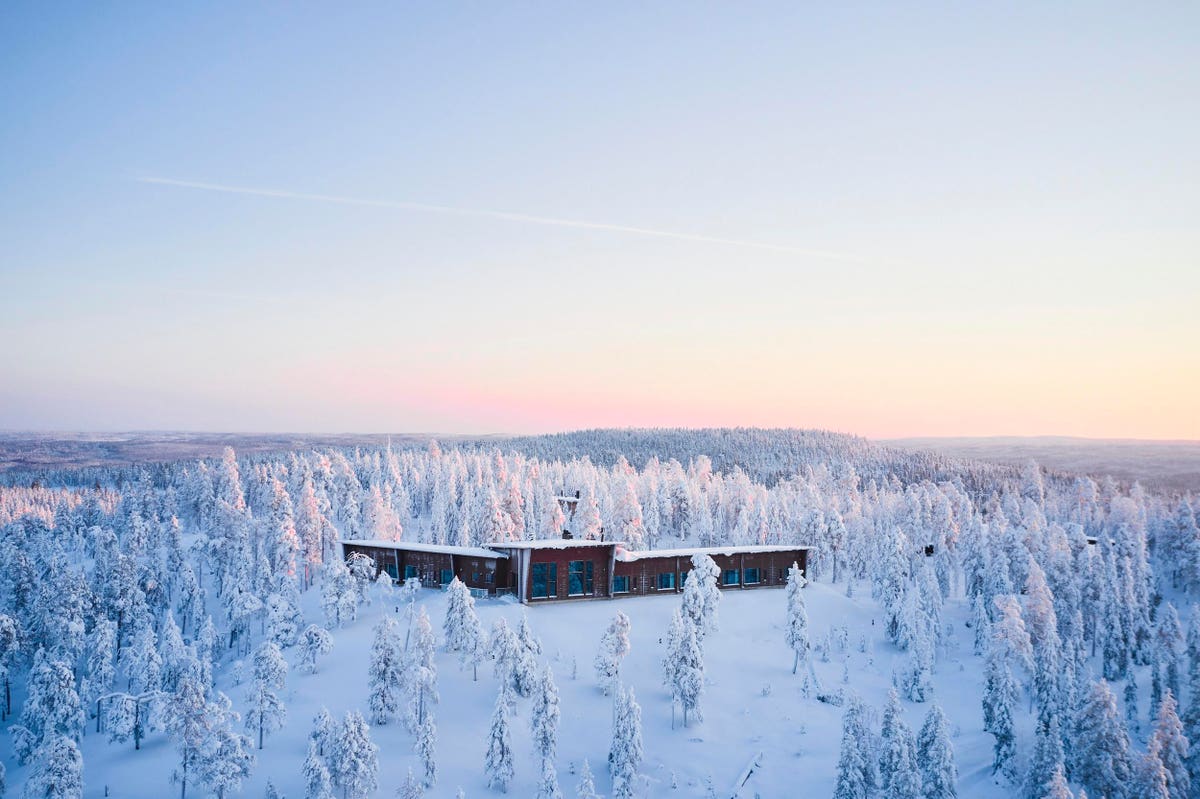 Sure, many people are dreaming of going south right now: to the Caribbean, to the Maldives, to Mauritius. Many others like the vibrant energy (and excellent gastronomy) of a ski resort in the Dolomites, in Aspen or Zermatt. But for winter lovers, there are better ways to make the most of the season.

These totally private, exclusive and secluded enclaves offer the best of the season – adrenaline pumping activities like ice skating and heli-skiing, glorious snow-capped landscapes and glorious light (both the sleepy, slanting sunshine of the day and the dramatic shows that the Northern Lights often put on after dark turned on after dark) and a good excuse to curl up in front of a fireplace in the company of friends.

This log chalet is so private and exclusive it doesn’t show up anywhere on Google Maps and all guests are asked to turn off geolocation on their phones for photos and videos. What is known is that there are nearly 750 private gateways to wilderness well above the Arctic Circle. Octola founder Janne Honkanen (who is also CEO of Nordic private travel company Luxury Action) said his aim was to create a place where “the healing properties of Lapland’s stunningly beautiful natural surroundings can be enjoyed”, but also a Place where loving service is part of the package. He oversaw the creation of Octola with the help of a local Sami architect and a good dose of Lappish tradition, ensuring the ten suites in the main lodge are all generous in size and equipped with ensuite bathrooms, a rarity among villas in the region. (There is an additional two bedroom villa for extra privacy or smaller groups.)

On a more intimate level, Loggers Lodge is a one bedroom cabin nestled in the woods in northern Sweden. It has reopened for this winter season after a significant investment to “create a new level of private wilderness” while maintaining the fantasy of a simple log cabin in the woods (albeit one fitted with all manner of sustainable technology and luxurious comforts – and such further now has a second bedroom in a modern glass structure). This is a place with history. It was built in the late 19th century as a way station for lumberjacks transporting timber along the coast. Upon discovering the cabin, owner Eric Borg was blown away by the rare original fireplace in the center of the room and set out to create a place where guests can disconnect from modern life and the outside world and experience pristine nature – clear air, complete silence and privacy. Guests are almost guaranteed not to see another person aside from the on-call staff, including activity guides and Borg’s lifelong friend and business partner, Jörgen Drugge, a trained chef who shows up to serve breakfasts of harvested berries and creamy local yogurt to prepare and freshly baked cinnamon rolls and dinners that may include reindeer carpaccio, kalix caviar with blini and arctic raspberry parfait.

Deplar Farm might be considered more of a summer destination, but its remote location on the Troll Peninsula in the far north of the island makes it one of the best places in the world to see the Aurora Borealis. (And for those who want to see them during a relaxing post-holiday stay, the lodge has launched a new wellness retreat program.) The 13-bedroom lodge is a converted sheep station with black wood paneling and a green roof. Floor-to-ceiling windows allow for optimal views of the surrounding mountain peaks and colorful dancing skies. Eleven is known for adventure sports, and there are options like fat-tire biking across the snow, as well as the chance to linger in the grand indoor spaces or spa, outdoor Viking sauna, or indoor-outdoor geothermal pool with a swim- up bar.

Don and Roberta Sheldon got their piece of land on a nunatak on Denali’s magnificent Ruth Glacier, just ten miles from the summit, under the Homestead Act some 50 years ago. Now her granddaughter Marne oversees the family’s Sheldon Chalet, which has been described as “one of the most unique lodges in Alaska and one of the most remote anywhere.” The chalet has five bedrooms that can sleep ten guests comfortably – the top suite offers uninterrupted views of the peak from the bed – on five scenic acres, more than a mile above sea level. Accessible only by helicopter, it offers some of the rarest sightings of the purple Aurora Borealis in the world. Designed to ensure longevity, sustainability and efficiency, the eco-friendly property contributes financially to local organizations such as the Talkeetna Historical Society, the Denali Arts Council and the Denali Education Center to advance understanding of Alaska’s interconnected natural and economic ecosystems support financially.

Although Åmot is a summer retreat, with a relatively southern location in Norway’s fjord region, it shares the same spirit of privacy, exclusivity, family history – and plenty of cozy fireplace time on April and October nights. The estate is owned by Steinar Sørli and Yngve Brakstad and has been in the Sørli family since 1885 when it was built by his great-grandfather Søren. For five generations it has been a homestead dedicated to family life with deep roots in the local culture. Sørli calls it a place “held together by the bonds of friendship and craft”. It is now an exclusive retreat with five suites, cozy living rooms, three fireplaces and a large dining area. The hosts are a conglomeration of farmers, fishermen, artists, musicians, storytellers and chefs – in this case of Michelin caliber. Private guides take guests into the unexplored fjords, mountains, and rivers of Sunnfjord (the name means ‘the place where two rivers meet’), and afterwards they can relax indoors or in an enclosed garden with a wooden hot tub and enjoy an evening of music with them national talent.