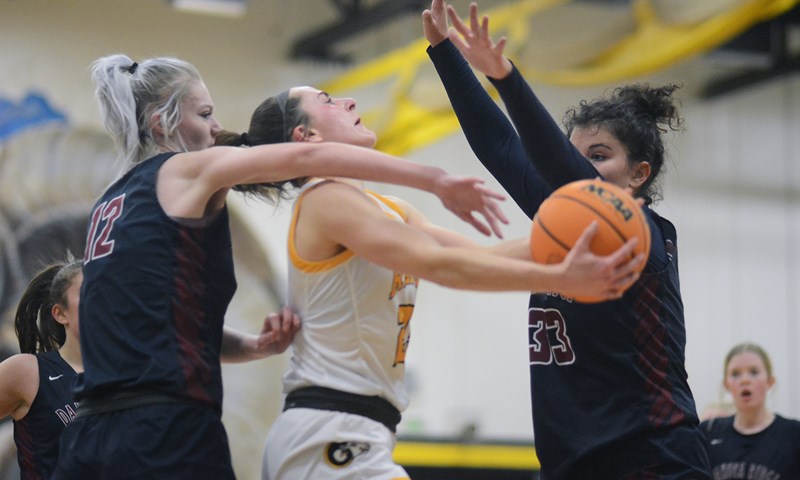 
LAKEWOOD – It’s no secret that Jayda Maves is one of the best basketball players not only in the Jeffco League, but in the state.

On Monday night, Western Colorado University’s commitment did something they’ve never done before during their stellar prep career. Maves scored a career-high 40 points in a 63-26 home win over Dakota Ridge.

“She (Maves) works so hard on her game. She’s had it for years,” said Matteo Busnardo, Green Mountain’s first-year coach. “It’s crazy to stand there as a coach and watch. You just keep going and going. I am very happy for her and the team.”

The Green Mountain senior was nearing a career total of 1,500 points in her four years with the Rams despite a sophomore 2020-21 COVID season. Maves has been instrumental in Green Mountain’s three consecutive 4A Final Four state appearances in recent seasons.

“To me, winning means so much to our team,” Maves said after their 40-point night, which included eight 3-pointers. “I want our team to be the best we can be. If I score, I want to boost everyone else’s confidence too.”

While Maves was the highlight with career night, the Rams had a nice supporting cast. Junior Taylor Ellington, along with sophomores Avery Freedman and Julia Schafer, all scored in the first 4 minutes of the game.

“We knew Dakota Ridge played a lot of zone defense and we had a lot of shooters,” Busnardo said. “I knew the shots would be open. For (Maves) to score 40 points, her teammates found her and trusted her. I have all the faith in the world in Jayda.”

Green Mountain — No. 8 in CHSAANow.com’s Class 5A rankings — led 39-15 at halftime. Mave’s final 3-pointer of the night a minute into the fourth quarter resulted in a 36-point lead and a running clock for the remainder of the game.

“Our energy was a bit lacking in the second half,” said Maves. “I had to keep us there and keep that energy level up. That’s my favorite part of the game, helping my team win.”

The Rams (9-5, 4-1 in the Class 5A/4A Jeffco League) had their first conference loss of the season behind them. Littleton handed Green Mountain a 55-50 away loss last Friday night in a game that saw the Rams hold a double-digit lead in the second half.

“We played so hard against Littleton and at one point we were 15 points up. They made an adjustment and we just broke down,” Busnardo said. “A game like this is good for us. If we’re in a game and a situation last, we’ll know how to adapt and get better.

There would be no collapse against Dakota Ridge (6-8, 3-2). Senior Sophia Hapke hit a 3-pointer at 6:17 in the game for the Rams’ last basket of the night.

“I think we played really well as a team,” Maves said of the bounce-back win.

Green Mountain hosts Pomona for another girls-boys varsity doubleheader at Green Mountain High School Wednesday night. Dakota Ridge will look to get back in the winning column when it hosts No. 10 Littleton on Wednesday.

“We’re in a really good position,” said Busnardo with nine regular-season games left before the postseason starts in about a month. “We have the chance to be a top 10 seeded team. In the last (league) game against D’Evelyn we have to prove ourselves. It will be a good test.”