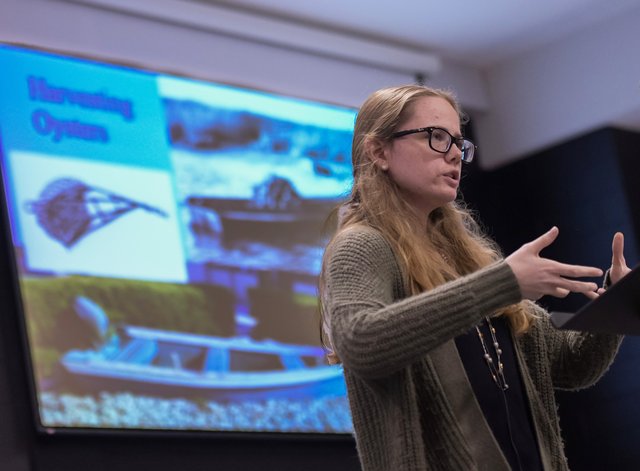 African Americans from the Gullah Geechee culture became the first “oyster people” on the Georgia coast in the 19th century, but businesses, often owned by European immigrants, later moved in to process and preserve oysters, researcher Ingram informed the Bulloch County Historical Society.

In the 1890s and turn of the 20th century, competition and unilateral regulation led to “oyster wars,” she says. Ingram, a final-semester graduate student pursuing a master’s degree in public history at Georgia Southern University, is completing her doctoral thesis on the subject. She spoke on Monday, January 23, during the Historical Society’s first meeting of the year.

“The fishing industry as a whole…it was pretty much started by the Gullah Geechee community in Georgia, and that’s only because the early colonial settlers were really focused on farming, and they thought that was where they could make the most money …while the Gullah Geechee was really focused on fishing and that was specific to Georgia’s quest system,” Ingram said.

The “duty system” of slavery, as practiced on the Georgia Islands and along the coast, “basically meant that as an enslaved person you were given a list of chores for the day and upon completion of the chores you could either help someone else with their duties or you could do something else like farm your own for a living, do your own fishing for a living or sell,” she said.

This differs from the “gang system” of slavery on inland plantations, she noted.

The “Oystermen” also fished for shrimp and blue crab, and when slavery ended with the Civil War, people in the Gullah Geechee communities continued this work.

Among Ingram’s slides was one showing traditional oyster-gathering equipment: a wooden jon boat or “bateau” and an oyster rake. An alternative to raking is the “pliers,” which uses a pair of long-handled tongs that are like rakes hung together to grab the water.

Because the naturally occurring oysters in Georgia were randomly grouped and varied in size, they didn’t work for the “half-shell oysters” desired by restaurants. So instead, an oyster canning industry emerged, she explained.

Some of the earliest oyster processing plants were owned by African Americans from the Gullah Geechee communities, Ingram noted. Examples include Ben Bond and John Anderson Seafood, which operated at Pin Point, Chatham County, in the 1900s, and Timmons Family Fishing Camp, which thrived at Harris Neck, McIntosh County, in the early 1900s

But with the profits to be made came an influx of new business owners, many of whom were European immigrants, Ingram noted. For example, LP Maggioni and Company, founded in 1870, was founded by an Italian immigrant, and Oemler Oyster Company, from 1889, by a German family. Other companies she noticed were the Vernon Oyster Company, operating in the 1890s, and later AS Varn & Son, from 1926 in Pin Point.

Government attempts to regulate the industry have been followed by lobbying “by the owners of big companies because they want the regulations to work in their favor,” she said. Regulatory efforts have focused on identifying which oyster beds are naturally occurring and therefore open to “public use”, while other land could be leased to private companies for oyster farming on a long-term basis.

At the request of the state, the federal government commissioned a US Navy Ensign to conduct an investigation. “Along with” an owner of the Oemler Oyster Company as his guide, the Navy man sailed up and down the Georgia coast in 1890-1891, reportedly charting the naturally occurring oyster beds, Ingram recounted.

Far from settling disputes, the resulting Bulletin 19 of the US Coast and Geodetic Survey contributed to further conflict and “oyster wars” also taking place further up the East Coast in Maryland and Virginia.

“Basically, it’s about a series of lawsuits, but there is actual violence on the water,” Ingram said. “We’re getting … men standing in boats with shotguns guarding the oyster beds, even here in Savannah and Darien and Brunswick, all along the coast, ready to shoot anyone they suspect to be an intruder or illegally stealing oysters.”

After the Great Depression and World War II, Georgia’s oyster industry shrank, mainly in the 1950s and with the closure of the last business in the 1970s. Now the former AS Varn & Son oyster and crab factory is preserved as the site of the Pinpoint Heritage Museum.

The regulatory effort and its outcomes are the focus of Ingram’s dissertation. She has visited Pinpoint and other places along the coast. Ingram, who spent her early childhood in Bulloch County but graduated from Richmond Hill High School in Bryan County, also earned her bachelor’s degree in history from Georgia Southern. She’s well on her way to becoming a “double-headed eagle” by receiving her master’s degree in May.