Home of Chuck and Selvia Kennedy 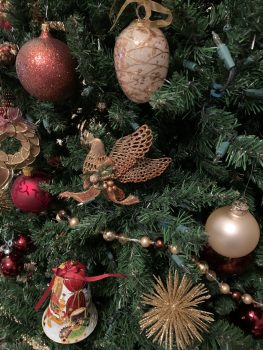 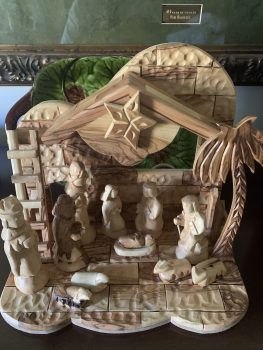 Chuck and Selvia Kennedy would like to welcome you to their North Hill home and hope that the sights, sounds and smells you encounter will take you back to your own treasured memories of the holiday season. As you step through the front door, the two-story foyer is ablaze with lights and garlands that climb the stairs, inviting you to explore further. On the left is a cozy office with a small tree displaying eggshell ornaments handcrafted by the parents of a student on Chuck’s first teaching assignment.

Upon entering the formal dining room, the table is set for the holiday season. The antique candelabrum contains candles bought by Chuck’s mother, Mattie, in England in the mid-1950s, as does the collection of antique teacups housed in the curio cabinet.

Up the stairs you will find grandson Jackson’s bedroom, decorated in a nature theme and with a tree full of ornaments reflecting his love of fishing and the outdoors in general. The antique fishing basket, reels, turkey call and bird whistle have been passed down the family, reflecting a generational love of hunting and fishing. Framed on the wall are badges collected from Jackson’s father’s days when he pursued his rank of Eagle Scout.

A large guest room has a tree elegantly decorated in gold and silver. A magnolia painting of the late Trula seal hangs on the wall. The dresser serves as a backdrop for a nativity scene depicting the true meaning of Christmas, the birth of our Jesus Christ.

The bedroom used by granddaughter Elizabeth has a ballerina themed tree that harkens back to the years Aunt Janine spent at dance school with her last pair of pointe shoes hanging from the footboard. At the head of the bed hangs a hand-woven silk scarf with a stork motif that Chuck’s father bought in Okinawa to take home for his bride at the end of World War II. The frame was the inspiration of the late Bill and Bettye Hursey. Bettye sewed the background to emphasize the intricate design of the scarf.

The bonus room, used as a bedroom by youngest grandson Jon David, features Nutcrackers and Santas. Scattered throughout the rooms are beautiful Christmas quilts that are the work of Debbie Brumfield. The bathroom offers a whimsical moment as you watch Charlie Brown and Snoopy admire the tree that Charlie chose.

Down the stairs is the master bedroom with a tree adorned with handmade ornaments crocheted by Selvia’s late sister. In the master bath, the tub deck is adorned with a Christmassy driftwood tree made from wood collected on Washington State’s Olympic Peninsula.

Returning to the great room, you’ll observe the table that Grandpa Dave rowed into the surf and rescued from a sailing ship that sank off the coast of Okaloosa Island in the 1920s. The antique bureau, bought in England, houses Mattie’s collection of Royal Doulton and Wedgewood.

The tour ends with the kitchen decorated with all gingerbread.