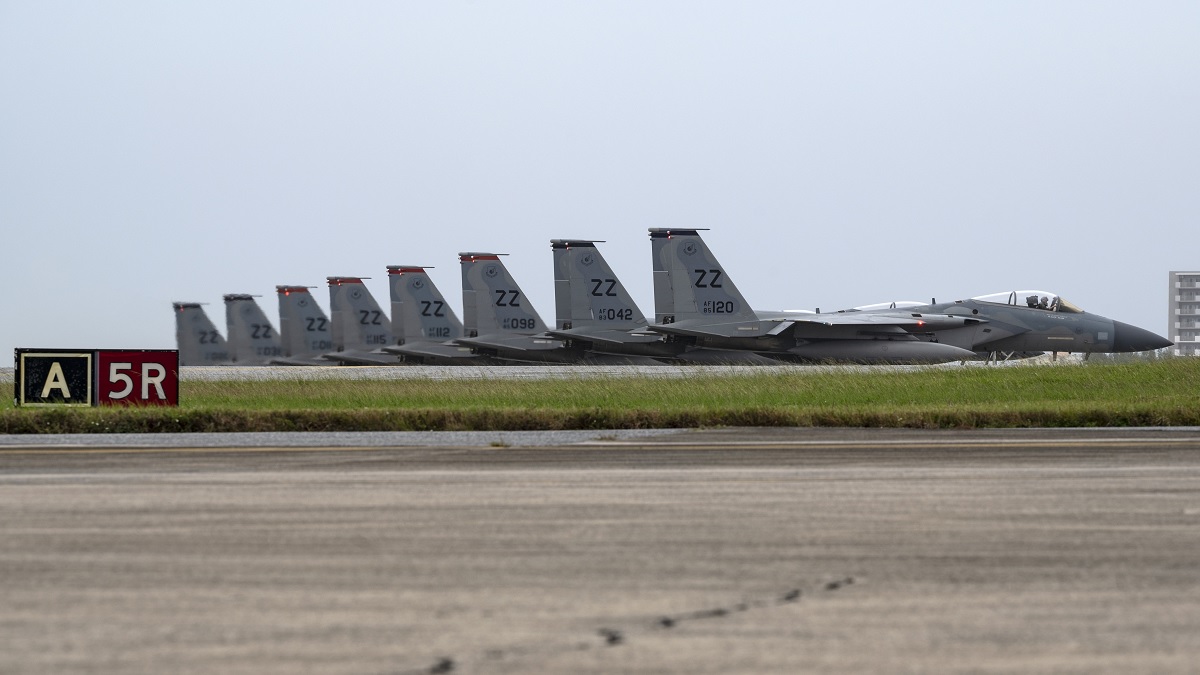 Some F-15 Eagle fighter jets continue to serve in various ANG units around the US, while others go to the 309th Aerospace Maintenance and Regeneration Group for storage.

The 18th Wing bade farewell to several F-15 Eagles on December 1, 2022 from Kadena Air Base, Japan. This is the Eagles’ first departure as part of their phased withdrawal from Kadena.

The jets fly to Kingsley Field Air National Guard Base in Oregon. As narrated by Staff Sgt. Savannah L. Waters, 18th Wing Public Affairs, in the article Team Kadena bids farewell to F-15 Eagles as phased withdrawal begins, from there some will continue service with various ANG units in the US while others will join the 309 .Aerospace Maintenance will be going to regeneration group for storage.

As Air & Space Forces Magazine noted, while the 18th Wing at Kadena did not specify in its announcement how many F-15s are departing in this initial reduction, an image shared by the wing showed eight fighters preparing for a final launch prepared .

As part of its modernization plan, the US Air Force is retiring the aging fleet of F-15C/D Eagle aircraft that have been in service for more than four decades. The Department of Defense will continue to maintain a constant fighter presence at Kadena, temporarily deploying newer and more advanced aircraft to replenish the F-15s when they return to the United States.

F-22s from 3rd Wing at Joint Base Elmendorf-Richardson, Alaska, have already arrived at the base. The service has said the F-15C/Ds will initially be replaced by a rotation of deployed fighters, while a permanent replacement has not yet been named, although it will likely be the F-15EX. F-16s from Spangdahlem Air Base, Germany are expected to follow the F-22s.

“This is the beginning of a significant journey for the 18th Wing,” said Brig. Gen. Gen. David S. Eaglin, commander of the 18th Wing. “This will take us from where we are today to a better place in the future where we will have modernized fighter aircraft here at Kadena to better protect our allies and ensure a free and open Indo-Pacific.”

According to 18th Wing leadership, the departure of this first group of Eagles is a poignant but necessary step to ensure Team Kadena remains poised to defend Japan and maintain regional stability.

“While I’m sad to see the F-15s go, it’s important to maintain an advanced fighter presence here in Okinawa,” Eaglin said. “Our opponents have evolved and progressed since 1979 and we must do the same. I look forward to the future as we meet the challenges of divesting an airframe that has served admirably in modernizing our defenses and evolving against the threats we face today.”

When the last eagle leaves Kadena, it will have performed more than 40 years of uninterrupted service on Okinawa. Eaglin credits the venerable hunter and the men and women who kept him flying with a legacy of air supremacy.

“I think the peace and stability of the region is one of the greatest accomplishments of the F-15s here, and the men and women who fly, maintain and support them made that possible,” Eaglin said. “With an unmatched record of 104 kills to zero casualties in air-to-air combat since it’s been here, we have a long history of deterring and reassuring by our presence that will endure as we modernize.”