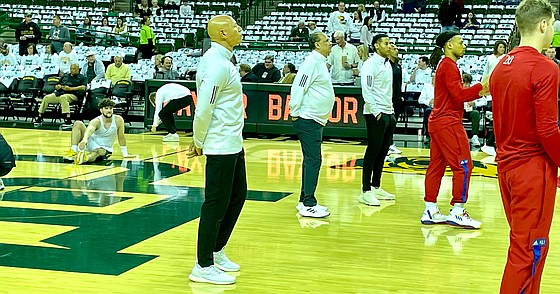 His father, Fred Quartlebaum Sr., died Sunday night at the age of 79 after a battle with stage IV lung cancer.

Fred Sr., who had lived in Lawrence for the past few months, was a longtime supporter of the Jayhawks and was always very proud to watch his son serve on the Kansas bench as the Jayhawks’ director of basketball operations.

When KU coach Bill Self asked Fred Jr. if he wanted KU to get a flight home after news of his father’s death, Fred Jr. said thanks, but no thanks.

Just before Fred Jr. left for Waco, he hugged and kissed his father and simply said, “See you when we get home.”

After the moment, Fred Sr. held up what Fred Jr. thought were four fingers. A bit perplexed, Fred Jr. asked his father what the gesture meant. As it turned out, it was only three fingers and it was meant to signal the letter W.

“Go and get the win,” Fred Sr. told his son after removing his mask.

“This whole thing reminds me a lot of last year with the coach’s dad,” Fred Jr. said of Bill Self Sr.’s death. “Like his dad, my dad would have wanted me to be here tonight — Go Coach. You have a job to do.”

The always positive Fred Jr. on his father’s death added: “We’ve had a great eight months with him (since his diagnosis). And being a caregiver during that time has been the most gratifying thing ever.”

The Kansas men’s basketball team fell seven spots to No. 9 in the Associated Press’s most recent Top 25 poll on Monday.

The rankings crash followed back-to-back losses — at Kansas State and at home to TCU — the latter being a 23-point drubbing at Allen Fieldhouse.

Still, it marks the 611th week in KU history that the Jayhawks are in the top 10 in the AP poll and the 269th week of the Bill Self era.

Six Big 12 teams are ranked in this week’s AP poll for the second straight year, with all six finishing 17th or higher. Kansas State, which went 6-1 in conference play into the week in sole possession of first place in the Big 12 race, jumped up to 5th place, while KU, Texas (10), TCU (11) and Iowa State (12th) ) are arranged in order from No. 9 to 12.

Monday’s KU opponent Baylor brought the back end for the Big 12 in 17th place.

It marks the highest finish for Jerome Tang’s Kansas State team since KSU finished third in the 2010-11 season. The Wildcats made the biggest jump of any team in this week’s poll, from 13th to fifth.

Gonzaga, who started the week at No. 14, had the biggest drop this week, dropping eight places from No. 6.

Purdue and Alabama shared all first-place votes this week, with the Boilermakers finishing at No. 1 and Bama at No. 2, followed by former No. 1 Houston at No. 3, Tennessee at No. 4 and K-State at No 5.

prayer and a chuckle

It is not uncommon for Baylor’s pregame celebrations to include a pregame prayer read aloud over the loudspeaker just before the tip.

Finally, Baylor University is a private Baptist Christian school. But while most of the prayers before Monday’s game sounded much like any other, this one contained a subtle touch of comedic flair.

“… protect the players from injury, the coaches from bad mood and the officials from bad visibility,” said the man reading the prayer, drawing a subtle laugh from both KU and BU fans in the stands.

Though not nearly as recognizable today as it was in the pre-COVID era of college basketball when coaches wore suits on the sidelines, this week marks National Association of Basketball Coaches Suits and Trainers Week.

The clothing and clothing effort is part of the Coaches vs. Cancer program and a nationwide campaign in which coaches from programs large and small come together to raise money and awareness for the fight against cancer and the work of the American Cancer Society to encourage those fighting the disease.

“NABC has proudly partnered with the American Cancer Society on the Coaches vs. Cancer program for nearly three decades, and the results continue to be truly life-saving,” said Craig Robinson, executive director of NABC, in a press release announcing the special week . “Suits And Sneakers Week brings our game together to support a common cause and is a testament to coaches’ passion to use their influential platforms for good.”

KU Coach Bill Self has been a longtime supporter of the sneaker event and Coaches vs. Cancer and has teamed up with MammothBuilt, a sports construction company, to shoot a video at the Allen Fieldhouse promoting regular demonstrations and awareness raising in the fight against cancer .

Near the end of halftime, the entire BU crowd stood to honor cancer survivors and those who lost the fight, with many fans holding signs to honor their friends and loved ones.