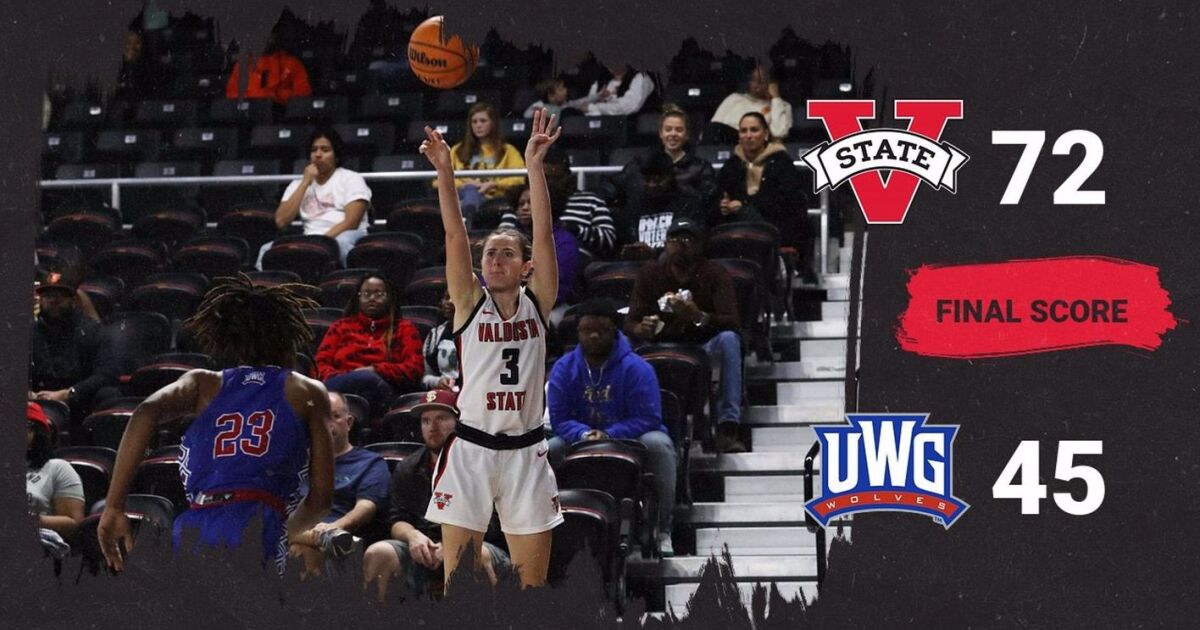 VALDOSTA, Ga. (VALDOSTA STATE ATHLETICS) — Behind a season-high 55.3 percent in shooting and a season-high 13-of-27 from beyond the arc, the Valdosta State women’s basketball team pulled off a 72-45 win over the visit Thursday night in West Georgia for the first meeting in the second annual Red Clay Rivalry Series. VSU won its fifth straight game, improving to 5-2 on the year and 4-1 in the Gulf South Conference game while West Georgia fell to 3-4 and 2-2 in the league game.

Lady Blazer junior Emma Martin finished with a VSU career-high 21 points on 7 of 9 from Beyond the Arc, an assist, a block and a steal to become Guardian Bank Lady Blazer Player of the Game. Sophomore Kate Tanner added 11 points, while senior Kendall Bollmer also had 11 points off the bench with three triples and four total field goals. VSU finished the game 7 of 11 from the line with 25 rebounds, 19 assists and 12 steals.

UWG was held out of the field at 35.4 percent at 17 of 48, while coming in at 2 of 16 from deep and 9 of 18 from the line. Maya Timberlake had a team-high ten points off the bench, while Sophia Singer had a game-high ten rebounds.

The teams will meet again on January 28, 2023 in Carrollton, Georgia to conclude the regular season series. If VSU wins this game, it earns a full point in the Red Clay Rivalry Series. If UWG wins the second game, the two teams each get half a point. UWG entered today’s competition with a 3.5 to 1.5 lead in the second annual rivalry series in the fall portion of the season.

Turnovers to Wolves and two free throws from junior Lili Long swelled the lead to 12-0 to start the game as UWG had six turnovers early on. UWG’s Aliyah Washington hit one of two free throws to get on board and Timberlake scored the game’s first field goal from deep for a 14-4 score and just over three minutes left in the frame. Sophomore India Jordan selected from afar for a 19-4 lead and 2:29 stayed within range with UWG’s second timeout. Two free throws and then a steal from Ards and a three from Bollmer increased the lead to 24-4 in the last minute of the frame. A free throw from Washington and a bucket from Tanner on the buzzer made the result 28-5 in favor of VSU by a frame .

Martin hit her second treble of the game for a 31-7 lead with 7:09 at halftime. Senior Kayla Frey saw her first action of the season and the first for her since the 2020-21 season, which recorded a steal earlier in the quarter. Martin struck again from range for a 34-7 lead, with five minutes left for a 6-0 run after UWG opened the frame with his second field goal of the game. Washington earned the “and one” for a 34-12 score and two minutes left at halftime. Sophomore India Jordan hit inside for a 36-12 score and good ball movement on Bollmer for a three-pointer and a 39-12 score with 15 seconds left at halftime. UWG’s Katelyn Dunning hit a three-pointer on the buzzer for a 39-15 VSU lead at the break.

For the half, VSU shot 14 of 24 from the field for 58.3 percent while going 6 of 13 from downtown and 5 of 6 from the line. The Lady Blazer “D” forced UWG to 14 turnovers in the first half for a 10-6 advantage in turnovers while VSU had nine errors. UWG held the Wolves for 20 percent on 5 of 25 from field while Wolves were 2 of 11 from depth and 3 of 5 from the line. Both teams had 16 rebounds and VSU led by the end of the half with up to 27 at 39-12. Martin had a team-high nine points on three 3s to lead the Lady Blazers while UWG had five points from Washington.

Consecutive 3s from Martin increased the lead to 52-21 with less than five minutes remaining in the third quarter, giving her 18 points for the game and a new Lady Blazer career high as VSU opened the second half with 13 points in the first 19 points. The Lady Blazers continued to shoot well from deep, pushing the lead back over 30 and holding a 68-34 lead with a 5-01 lead in the fourth quarter. Sophomore Grace Beyer came late into the contest and went for a 71-38 on her first field goal attempt and then got a rebound down the other end just over two minutes from time. The Lady Blazers went on to win 72-45.

The Lady Blazers continue the three-game homestand on Dec. 11 when Union comes to town for a 2 p.m. tip, followed by Christian Brothers on Tuesday, Dec. 13 at 6 p.m. to close the homestand. VSU wraps up the pre-holiday game on Sunday, December 18 at 3:00 p.m. ET in West Florida.