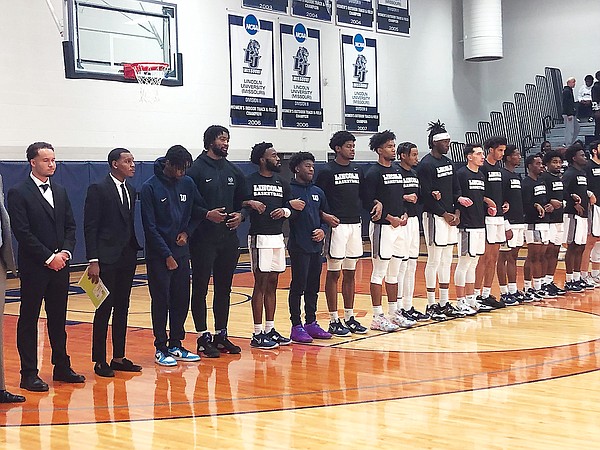 It wasn’t always pretty, but the Lincoln Blue Tigers picked up their first MIAA win under coach Jimmy Drew after beating the Newman Jets 59-58 Thursday night at Jason Gym.

The Blue Tigers shot just 34.5 percent from the field and only made three 3s, but found a way to pull it off.

“We have fighters in our dressing room,” Drew said. “Right now we are aggressively looking for who we are. We just haven’t clicked as much as we need to in the last few games, but our guys just keep digging and finding whatever they need on the defensive end to do what it takes.

“It wasn’t pretty tonight, but we did what was necessary. I’m proud of how the boys rebounded.”

It was a great start for the Blue Tigers as they took an 11-2 lead after less than three minutes.

But Lincoln scored just 12 points over the next 14 minutes and was down 28-23 in the first half, 1-23, forcing Drew to call a time-out and talk about the dying seconds of the first.

“The message was exactly that, let’s elaborate,” he said. “We took some time off just to get our boys settled in. We threw the ball away and they didn’t really push us to do it. We just hit ourselves. I just told them to settle down and go out.”

The news was received as DJ Richardson and Emmette Page knocked down the Blue Tigers’ first two 3s of the game to give them a 29-28 half-time advantage.

Lincoln capitalized on another hot start to the second half and jumped to a 37-31 lead. But another offensive break-in that allowed Newman to slowly break away before connecting the game at 47 with a 7:41 left.

The game remained tied at 47 until the 4:29 mark when Triston Turner hit a free throw to knock the Jets by a lead.

“Sometimes we get out of character and force shoot for no reason,” Drew said. “Our message to our boys is to give up a good shot for a great shot. Tonight I don’t think we did that.”

Lincoln only shot 3-for-8 from the free throw line on the stretch, but it was enough as the Blue Tigers’ defense stayed strong and gave them the win.

Stevie Strong hit a 3 on the buzzer for Newman to take it from a four point lead to one.

“That’s where we hang our hats,” Drew said. “Every night we know we’re going to bring this whether our shots or go in or not. We want to be an every night team defensively because that keeps you in the games.”

Lincoln (4-1, 1-1 MIAA) was led by the duo of Artese Stapleton and Kevin Kone. Stapleton had a team-high 16 points, but Kone notched his fourth double-double in five games in a Blue Tiger jersey, grabbing 22 rebounds and scoring 14 points.

“(Kone) does this every night,” Drew said. “It’s just one of those things that at the end of the night you look at the score sheet and you’re just blown away. I’m almost deaf at this point.”

The Blue Tigers will now focus on hosting seventh-seeded Central Oklahoma (6-0, 1-0) at 3 p.m. on Saturday. The Bronchos beat Central Missouri 64-58 on the road Thursday night for their first MIAA win.