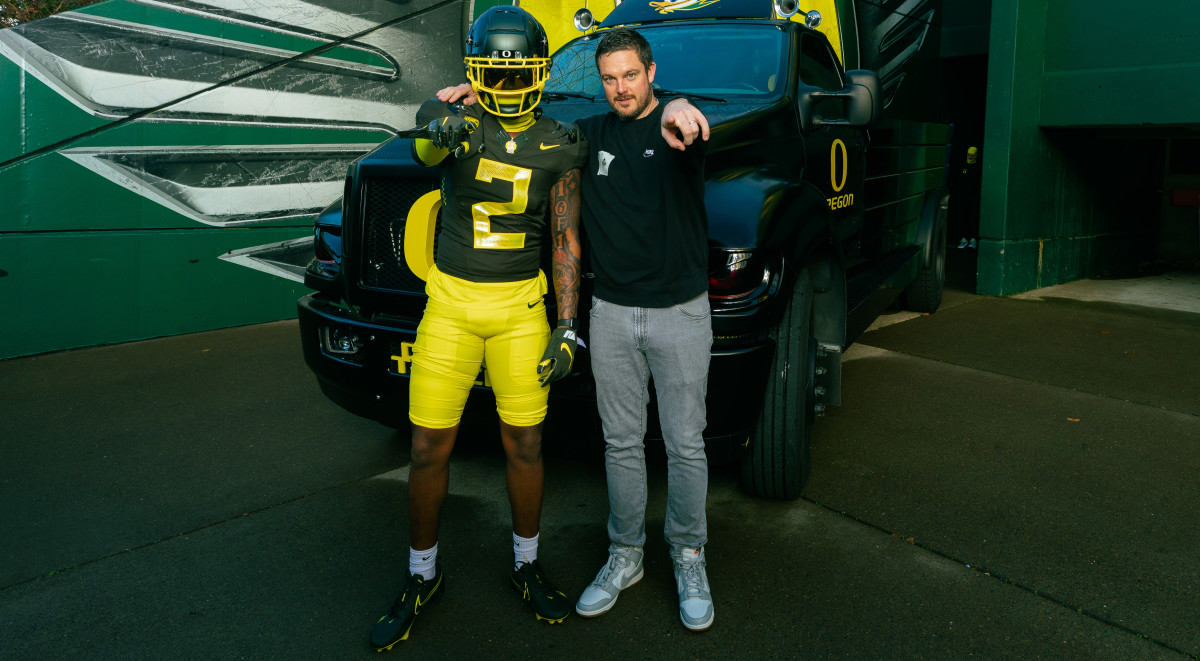 Linebacker is a position needed for the Oregon Ducks in 2024 and the coaching staff has a tab Dylan Williams a top priority in this recruitment cycle.

He made his third trip to Eugene over the weekend and had a say ducks digest.

“Really just to understand the concepts and just get a chance to chop the ball with Coach Jake Long and Coach Tosh Lupoi,” Williams said of why he made the trip. “Less of a recruiting visit and more just understanding the ball and learning things, picking things up from them.”

During the trip, he was able to break down his movie with the coaching staff, attend player meetings, and enjoy some local restaurants like LaMichael James’ new Killer Burger location in Eugene and the Original Pancake House.

The visit to learn from the coaching staff, rather than one focused on recruitment, was the first of its kind for the standout Southern California player.

“It was the first time I really just talked about ball and soaked up as much knowledge as possible. It was really a great weekend for that.”

Having been to Eugene many times, the visit gave him the opportunity to enjoy the nature and scenery that the city has to offer which was a major highlight.

“I love everything about Eugene. The facilities. The landscape,” he said. “As a kid from LA, we don’t really get that much, so we definitely get to see nature and everything around it.”

The 6-foot-2, 208-pound prep has developed relationships with Jake Long, Dan Lanning and Rashad Wadood, but one relationship has meant that Oregon’s approach differs from every school that has recruited him.

“I just got very close to Coach Tosh Lupoi,” Williams said ducks digest. “He’s a really down-to-earth guy. He’s one of the realest out there. He’s definitely one of Tosh’s best coaches.”

Relationships are a key reason the Ducks have put themselves in a great place with Williams.

“Oregon is definitely a top school for me. I know it ticks a lot of the boxes that I’m looking for and I’m going to develop very well there and just become a better player there.”

Aside from Oregon, Williams has seen his recruiting take off of late, with offers from Alabama, Auburn, Michigan and Colorado all coming this month alone.

“My recruitment is really starting to explode. I just really take my time with my recruitment, weighing and listening to all my options and giving each one a chance.”

As we move through the winter and spring months, Williams is playing 7on7 ball with Premium Sports LA and working on speed training.

With so many schools following him, he has been quite busy with travel with recent trips to Oregon as well as UCLA. But he also has some trips in the works for the near future.

“I’ll be in Washington this Friday,” Williams said. “I plan on coming to Miami and Colorado very soon, they’ve kept me busy. I’m supposed to go back to SC too. Alabama is also in the works ASAP.”

The Class of 2024 is now a prime focus for coaching staffs across the country and Williams has updated its decision timetable.

“Probably at the end of my senior season,” he said. “Right now I’m really taking my time. Maybe I’ll sign up for an All-American game, maybe something like that on TV. I’m on track to graduate early, so I’ll be enrolling in classes early in January.”

Join the discussion in our forums HERE