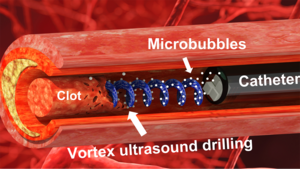 Researchers have developed a new tool and technique that uses “vortex ultrasound” – a type of ultrasonic tornado – to break up blood clots in the brain. The new approach worked faster than existing techniques to eliminate clots that had formed in an in vitro model of cerebral venous sinus thrombosis (CVST).

“Our previous work looked at various techniques that use ultrasound to clear blood clots with essentially forward waves,” says Xiaoning Jiang, a co-author of a paper on the work. “Our new work uses vortex ultrasound, where the ultrasonic waves have a spiral wavefront.

“In other words, the ultrasound swirls as it moves forward,” says Jiang, who is the Dean F. Duncan Professor of Mechanical and Aerospace Engineering at North Carolina State University. “Based on our in vitro testing, this approach clears blood clots faster than existing techniques, primarily due to the shear stress induced by the vortex wave.”

“The fact that our new technique works quickly is important because CVST clots increase pressure on blood vessels in the brain,” says Chengzhi Shi, co-author of the paper and an assistant professor of mechanical engineering at Georgia Tech. “This increases the risk of cerebral hemorrhage, which can be catastrophic for patients.

“Existing techniques are largely based on interventions that dissolve the blood clot. However, this is a time-consuming process. Our approach has the potential to target these clots faster and reduce risk for patients.”

CVST occurs when a blood clot forms in the veins that are responsible for draining blood from the brain. Incidence rates of CVST ranged from 2 to 3 per 100,000 in the United States in 2018 and 2019, and the incidence rate appears to be increasing.

“Another reason why our work here is important is that current treatments for CVST fail 20-40% of the time,” says Jiang.

The new tool consists of a single transducer specifically designed to create the swirling vortex effect. The transducer is small enough to be incorporated into a catheter, which is then passed through the circulatory system to the blood clot site.

For proof-of-concept in vitro testing, researchers used cow blood in a 3D-printed model of the cerebral venous sinus.

“Based on available data, pharmaceutical procedures to dissolve CVST blood clots take at least 15 hours and average about 29 hours,” says Shi. “In in vitro tests, we were able to dissolve an acute blood clot in well under half an hour.”

With any catheterization or surgical procedure, there is a potential risk of injury, such as B. damage to the blood vessel itself. To address this problem, the researchers conducted experiments using vortex ultrasound on animal blood vein samples. These tests revealed no damage to the walls of the blood vessels.

“The next step is that we conduct tests with an animal model to better demonstrate the feasibility of this technique for CVST treatment,” says Jiang. “If these tests are successful, we hope to be able to conduct clinical trials.”

“And if vortex ultrasound ever becomes a clinical application, the cost would likely be comparable to other interventions used to treat CVST,” Shi says.

The publication, A Model of High-Speed ​​Endovascular Sonothrombolysis with Vortex Ultrasound-Induced Shear Stress to Treat Cerebral Venous Sinus Thrombosis, is published in the open-access journal research, which is a Science Partner Journal. The paper’s co-lead authors are Bohua Zhang, a Ph.D. student at NC State; Huaiyu Wu, a postdoctoral fellow at NC State; and Howuk Kim, a former Ph.D. Student at NC State now teaching at Inha University. The paper was co-authored by: Georgia Tech’s Phoebe Welch; Ashley Cornett, Greyson Stocker, Gabe Owens, and Zhen Xu from the University of Michigan; Raul Nogueira of the University of Pittsburgh Medical Center; Jinwook Kim, research assistant professor in the Joint Department of Biomedical Engineering at North Carolina State University and the University of North Carolina, Chapel Hill; and Paul Dayton, department head and William R. Kenan Distinguished Professor in the Joint Department of Biomedical Engineering.

Disclaimer: AAAS and EurekAlert! are not responsible for the accuracy of the press releases published on EurekAlert! by contributing institutions or for the use of information about the EurekAlert system.