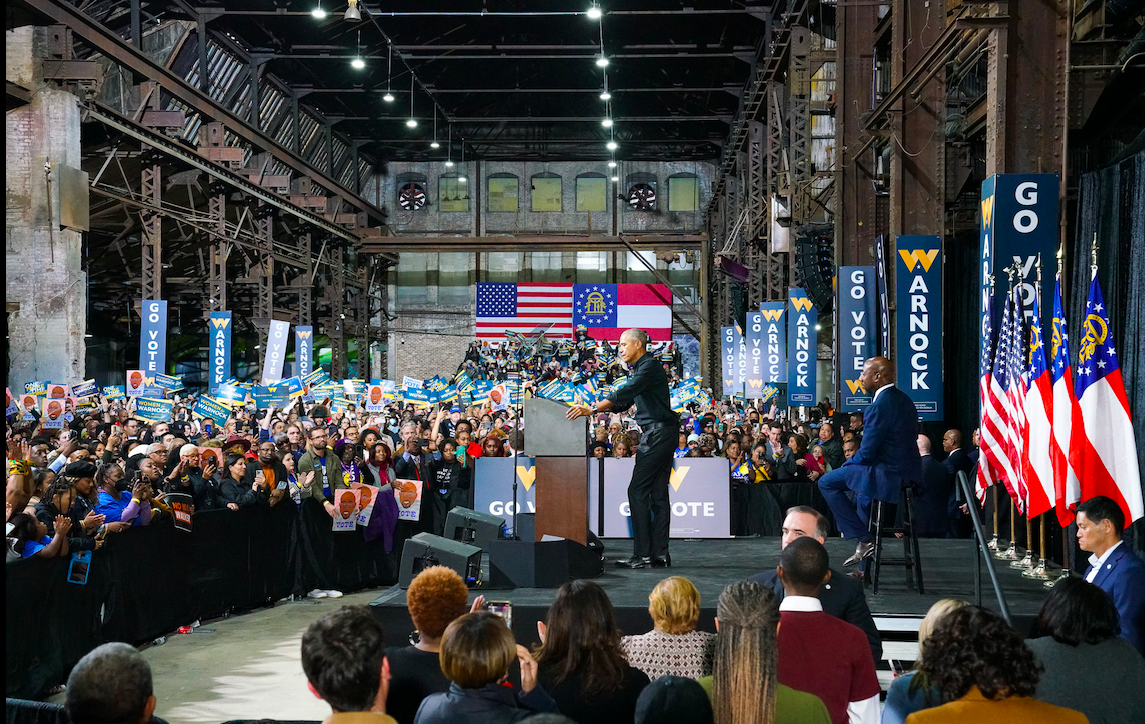 A small, young voice drowned out the din of the large crowd at Pullman Yards. “We have the power,” they said. Four-year-old Kiran (pronounced like the biblical text Koran) caught the eye of the keynote speaker, who took the stage at Metro Atlanta for the second time in less than six weeks. “Hello Atlanta, I’m back. I’m back,” said former US President Barack Obama.

The reason Obama was back in Georgia was to try to get one of the candidates he stumbled for last month (the other was Stacey Abrams) into office. Hearing Kiran’s message about the power of voting, Obama said, “This young man gets a straight A in this class,” adding the popular Biblical axiom (Psalm 8:2): “Out of the mouths of babes.”

Obama had been addressing voters at the Gateway Center Arena in College Park a week before the midterm elections, and now he was back, this time in Kirkwood, speaking to voters again. The message was slightly different, however, this time he wanted voters to keep the momentum from another record-breaking early turnout.

According to the Ministry of Foreign Affairs, more than 1 million voters in Georgia took advantage of a second early voting opportunity as of Wednesday. “You know, it feels like we just did that,” Obama said.

Brought on stage by Senator Reverend Raphael Warnock (D-GA), the former president said the massive turnout passed more than 300,000 times on Monday and Tuesday, November 28 and 29, according to the Secretary of State’s office been data- was something to be very proud of.

However, he doesn’t want people who didn’t vote to take that as a sign that enough votes have been cast. “We can’t get complacent, we have to go through the tape,” he said.

Any complacency that the Democratic Party has already secured the seats it needs to control the United States Senate was another thing that put Obama in better perspective for the crowd. “What’s the difference between 50 and 51?” he asked the crowd rhetorically. “The answer is a lot. 51 is better than 50 because that means Reverend Warnock will continue to represent you in the Senate.”

Warnock echoed Obama’s sentiments. “I’m inspired by this high turnout, but I don’t want us to be lulled to sleep,” he said.

“If you vote, not only will we re-elect Raphael Warnock, not only will we keep Georgia and America on the road to a brighter future, but we will set the tone for this four-year-old’s future right there.” ‘ Obama said of Kiran.