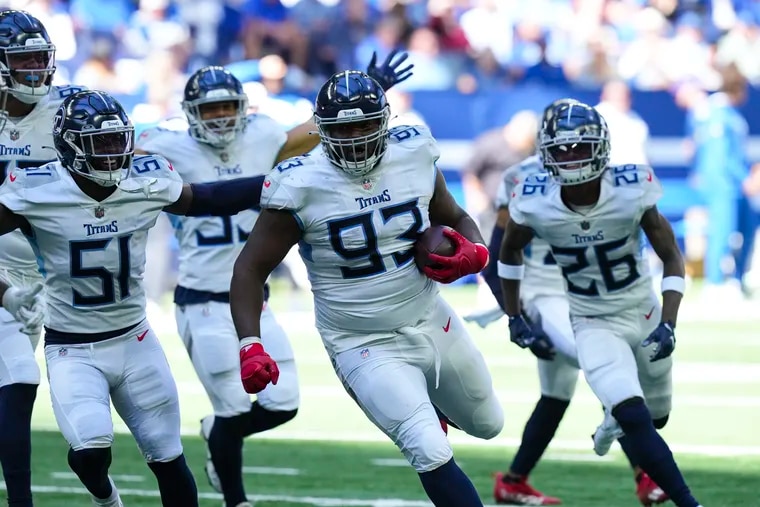 Teair Tart, whose feet were swollen and covered with blisters, ripped off his cleats minutes into his first soccer practice session and told coaches he wanted to play in trainers.

Karl Patrick spotted Tart eight months earlier at a high school basketball tournament, told him he had what it takes to be an NFL defensive tackle, and urged him to transfer to West Philadelphia High School before his junior year. It was a big dream as Tart had never played football or worn cleats, but the 15-year-old agreed to give it a try.

And that trip — which brings Tart home Sunday when the Titans play the Eagles — felt only more unlikely in August 2013, when Tart walked off the field in his new pair of size 14 cleats.

“I had to think fast,” said Patrick, better known as Coach Bubb. “I can’t lose this guy. I can’t lose him. So I said, ‘Go on, put on your basketball shoes.’”

Tart, struggling to gain a foothold in sneakers, was pushed off the line despite being 6ft 3 and 265lbs. Football, he told his coach, was stupid. He was done. Patrick urged him to keep going – with cleats on his feet – and that might be the last time Tart thought about quitting.

Growing up as one of 10 kids in a North Philadelphia row house, he attended four junior colleges in two years, eventually promoted to Division 1, wasn’t drafted, ended up on the Titans practice team and forced his way onto the starting lineup for one of the top teams of the AFC.

Tart’s brother died while attending school in New York, was expelled from a junior college called Last Chance U, and lost his scholarship to play in Alabama before making his way to a junior college in Kansas that led him to Florida International.

Tart, ranked by Pro Football Focus as one of the better central defenders in the league this season, just kept fighting.

“I just found a way,” Tart said. “Nothing will be easy. Nothing will be handed to you. It becomes difficult, extremely difficult, to break old patterns and bad habits created over generations. You must adhere to it, accept change, and be willing to move with change. Adversity will come eventually, but you must persevere, no matter how hard it is or how ugly it looks. Just go on. Keep trying. Go on.”

“You will never achieve anything by doing nothing. But as long as you do something, something good will come of it.”

It didn’t take long for Patrick, then coach of West Philly’s defensive line, to convince the other coaches that Tart was something special. Tart eventually started wearing cleats and was a force at the team’s first scrimmage. He dominated the defensive line and the Speedboys used him at full-back for what Patrick described as “an automatic two-point conversion.”

Tart helped West Philly reach the 2014 Public League Championship in his senior year and was the MVP of the All-City All-Star Game. Not only was he huge, but Tart was quick and agile, moving like a basketball player.

He was playing for Walter D. Palmer when Patrick spotted him on the court. The school, which closed in 2014, did not have a football team. So Patrick Tart’s mom called from the gym that day and asked her to send her son to West Philly.

“I said, ‘Ma’am, I’m watching an NFL defensive tackle,'” Patrick said. “‘If you let him come here and play football, I promise he’ll be next.’ In August the season was about to start and she called me.”

Patrick, now the head coach of West Philly, knew Tart’s path to the NFL would take him to junior college first. Tart was late for football and his grade point average also needed improvement.

Tart joined ASA College in Brooklyn — which regularly sends players to Division 1 schools — and appeared to be on his way in January 2016. Alabama, a week after winning a national championship, offered him a scholarship. Three years earlier he played basketball in West Philly. Now Nick Saban wanted him.

Six months later, just before Tart’s second season with ASA, his 24-year-old brother Rasheed died in a motorcycle accident on the Blue Route.

“Ask anyone, he had the best smile in the world,” Tart said. “He was a great guy who certainly took care of him. It was really hard. We all lived in the house together and it was the biggest part of my rough patch.”

Tart left Brooklyn to come home. Patrick helped him get to the Valley Forge Military Academy and asked them not to even talk about football. Tart, struggling with the loss of his brother, needed a break.

He soon transferred to East Mississippi Community College – the subject of the popular Netflix series Last Chance U – but was kicked out of the team before playing a game. His scholarship offer to Alabama was gone.

Tart, whose football dream was eclipsed, moved on. He earned a place at Ellsworth Community College in Iowa, where he caught the eye of former Cleveland Browns head coach Butch Davis. He offered him a scholarship to Florida International, a Division 1 program in Miami.

“All I ever said was someone had to give him a chance,” Patrick said. “I said that to Butch Davis, I said, ‘Coach, I’m asking you one thing. Give the kid an opportunity, work with him, take your time and I promise he will deliver for you in the field. I promise.’ When you get an athlete like that, they only come once every 20 or 30 years. You’re not always blessed with guys like that.”

He played two seasons for FIU and impressed at the NFLPA Collegiate Bowl, but he was not one of the 255 players selected for the 2020 NFL Draft. He went to training camp with the Titans and earned a spot on their training team. The Titans, Tart said, give every player a chance, no matter what draft pick they were.

Tart made his NFL debut in November 2020 and cracked the starting lineup in Week 16. Tart has started all 12 games this season and plays about half of the snaps for the Titans, who conceded the third fewest rushing yards in the league. He was one of the better interior pass rushers in the league, pressing the quarterback 13 times despite regularly facing doubles.

He has deflected five passes, the third most among all linemen, and could dwarf Jevon Kearse’s franchise record of nine by a defensive lineman. In Week 4 against Indianapolis, Tart flipped Matt Ryan’s pass in the air and caught him as he fell to intercept an important division win. The 304-pound lineman displayed the athleticism that distinguished him on the basketball court.

Patrick wasn’t at the basketball tournament recruiting football players 10 years ago. He had nothing to do that day, so he figured he’d watch some of the students he coached play football and track basketball. And then he saw Tart.

Patrick said he doesn’t take credit for discovering Tart as he believes he should be in the gym that day. He’s just grateful that he had the chance to introduce him to football.

“I hate sounding like that, but most of the time I’m not surprised at what he’s doing on the field,” Patrick said. “It’s not arrogance, it’s a feeling God put in my mind for him a long time ago. I have never wavered before him because I have never wavered before God. It’s just that I had always believed in God and I knew this was going to happen. And I know football.”

Patrick will be at Lincoln Financial Field on Sunday afternoon when Tart rushes out of the tunnel to play the team he grew up on. Tart will have 15 family members in the stands and he asked his old coach to pick five players – “I want the kids who go unnoticed and work hard and come to practice every day,” Tart said – to bring with him.

The defender still remembers how it sounded as a kid in North Philly when Donovan McNabb found Terrell Owens for a tie touchdown, the entire block roared as every house was taped on the play. On Sunday he will be on the field while his city tunes in to watch him play.

All because 10 years ago a trainer saw something and a teenager kept his cleats on and found a way to fight.

“I grew up afraid of doing nothing and being homeless,” Tart said. “I don’t know why, but that fear was always there. I was just so afraid of becoming homeless or not being able to do anything. Just afraid that I don’t do anything. This has always made me try harder and work a little harder. I hope I never have to think about what I would have done if things hadn’t worked out, but I know how I feel now and how I felt then.”

“It was crazy. It’s very humbling. It was an emotional journey. There was a lot of adversity and a lot of hard times, but I’m glad I persevered. I never gave up and kept working.”