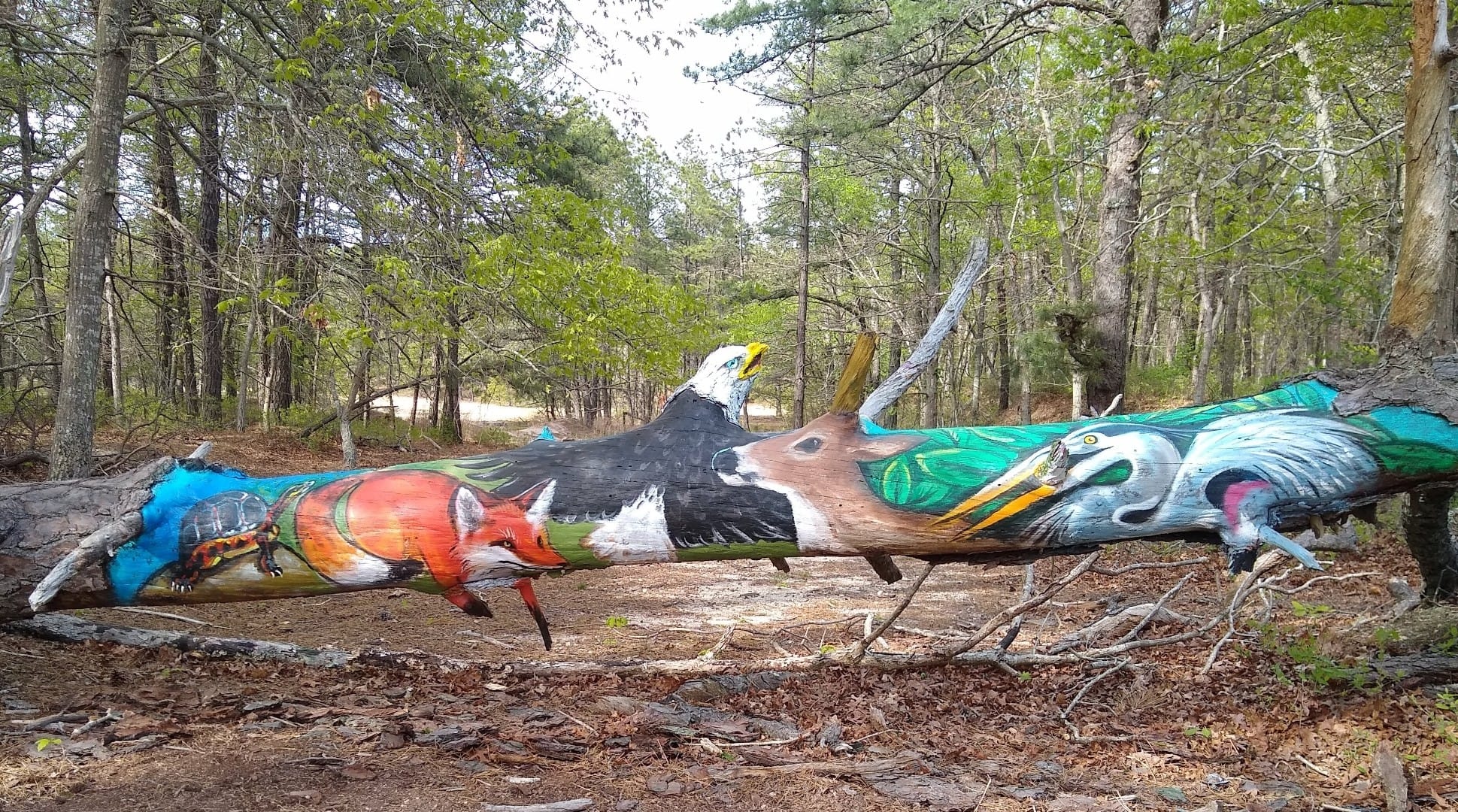 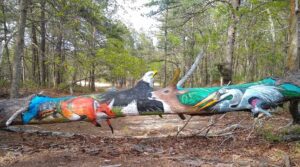 COLORFUL CRITTER: An original Pines-inspired mural painted on a fallen tree at the Stafford Forge WMA at the start of the pandemic is making a cameo in William Lewis’ new documentary, The Reluctant Piney. The artist said the temporary, anonymous nature of the project is partly what she enjoys most about it. (Photo by Leah Morgan)

Author William Lewis, creator of Piney Tribe, has produced a 90-minute independent documentary, The Reluctant Piney, due out this spring. A six-minute excerpt from the film serves as the official trailer. Find it on YouTube and subscribe @pineytribe9939. The basis for the documentary project was Lewis’ first book, New Jersey’s Lost Piney Culture.

The trailer shows how Lewis weaved history and photography with poetic narrative and plenty of science. Keep in mind that the 1.1 million-acre Pinelands National Reserve, established by Congress in 1978, accounts for 25% of the state’s total acreage. Learn the Latin names of native species. See interviews with old hands, Pineys by birth, descendants of Pinelands craftsmen. Lucille’s Luncheonette, itself a cultural institution, performs.

A highlight of the trailer is the painted tree trunk mural, located in the Stafford Forge Wildlife Management Area, created by Leah Morgan of Leah Morgan Art Works in Little Egg Harbor at the start of the COVID pandemic. Morgan and her daughters started the project and Mom later went back and finished it, she explained. They let the broken branches and branches of the fallen tree trunk determine the composition of the animals – the legs of a fox, the head of an eagle, the antlers of a buck, a fish caught in the beak of a gray heron.

What is Piney Tribe? A collective of Pine Barrens fans, home bred and adopted, according to their home page, pineytribe.com, where visitors can access a treasure trove of information and all things Pine: events and festivals, a guide to fauna and flora, links to others helpful online resources. Shop Piney Tribe Merch and wear it proudly.

Lewis described his feelings as “excited, exhausted and ecstatic” in his social media announcement. He has already secured dates to screen the documentary in Tuckerton on May 15, at the library and at the 76th Burlington County Farm Fair on July 18-20. Additional screenings will be announced shortly.

Lewis’ book is available at delis, diners and the River Road Clam House in Lower Bank.

Released in January 2021, Lost Piney culture is about the people deep in the heart of the New Jersey Pine Barrens who have built a vibrant culture and industry by working the natural landscape that surrounds them.

“The foraging skills learned from local Lenapes were passed down through generations of Piney families who collected many of the same wild flower produce that became staples of the dried flower markets in Philadelphia and New York,” the description reads. “Eminent figures such as John Richardson have attempted to lift the Pineys out of rural poverty by recording and marketing their craftsmanship. As the state government sought to preserve the Pine Barrens and develop the region, the Piney culture was frequently threatened and stigmatized. Author and advocate William J. Lewis chronicles the story of the Pineys, what it means to be a Piney today, and their legacy amidst the beauty of the Pine Barrens.”

Morgan shared her identity and intentions behind the mural with Lewis in an anonymous statement while he was filming the documentary, which she shared publicly this week along with the documentary trailer.

She told him she prefers to remain anonymous because she appreciates seeing people’s reactions, good and bad. Morgan explained her reasons for creating the mural had only to do with remembering and highlighting the biodiversity of the Pine Barrens and giving people a reason to smile during lockdown.

The mural “will one day be gone and erased from its location, and I like that,” she said. “Nothing lasts – as we speak, the tree is decaying along with the colour. It will most likely not be there next year and all there will be are pictures. This temporal quality is something that interests me and humbles me. I found it hilarious that everyone calls it ‘graffiti’.” When it started making waves online and others took an interest in finding it, Morgan felt she had accomplished her mission and was quietly grateful that she could motivate people to explore the great outdoors.

“I’d like to think I can help people gain respect for the history and ecological importance of our area,” Morgan said.

Lewis is looking for additional venues to screen the documentary this spring. Contact him at 609-775-7134 or [email protected]