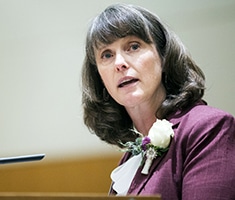 Excerpts from an interview with C. Shannon Bacon, Chief Justice of the State Supreme Court:

Question: What do you think of the public’s concern about crime and the perception that the system is somehow soft on crime?

Answer: Everyone’s perception is based on what they see and hear. I think that over the last four years there has been very unbalanced discussion of the criminal justice system and a real lack of understanding of how it actually works.

Question: Legislators have introduced a number of bills aimed at fighting crime. Are you concerned that the judiciary could be tasked with implementing measures devised by people who don’t really understand how the system works?

Answer: That concern is always there. We worry about unfunded mandates where the legislature may not understand… the tax implications [of proposed policy decisions] on the judiciary. Then our budget is getting thinner and thinner. I’m hopeful because I feel like we’re now having a better dialogue with the legislature and being involved in different types of conversations… hopefully that will avoid that kind of misunderstanding and lack of understanding.

Question: In a way, the courts are being asked to solve the problem of crime, but many, including the newly elected attorney general, say adverse childhood experiences are the biggest cause of crime. Does the judiciary have the power to curb crime? And how?

Answer: It is not. We are the ones enforcing the law. To tackle crime globally in a state like New Mexico, you have to start with behavioral health. That’s the key for me. And that relates to this childhood trauma issue. It’s a childhood trauma. It’s poverty and lack of education, lack of opportunity coupled with mental and behavioral health issues that are simply not adequately addressed in New Mexico.

Question: Does that put you in a difficult position?

Answer: It can. Today I spoke about our mental health commission. We seek solutions to mental and behavioral health challenges in New Mexico. Because at the moment, most behavioral health services are provided by the judiciary and correctional institutions, and that is not an adequate way to address these issues. We want to address these issues before anyone enters the criminal justice system. They are much more difficult to address once they are in the system. But once they are… we put a lot of effort into treatment courts, and they’re very, very successful. And now we’re looking at competence in a new way and trying to reform that system. So these are things that the judiciary can control, but it’s just a small piece of the puzzle.

Question: They have highlighted bail reform as something that advances the basic ideas of the justice system, but it has been targeted for further reform by people who say it allows dangerous criminals to go free. Does it get a bad rap from the public and legislators?

Answer: I wouldn’t say it’s bad rap. I think it’s a misunderstood process. And that was my goal today; to remind people that before bail reform in New Mexico, all dangerous people were on bail and on trial, and it wasn’t about dangerousness. Under our system, they were entitled to bail. So someone’s grandmother took out a payday loan on her car so her grandchild could be free pending trial. And they were just walking around outside. They were not subjected to any system that would certify that they were not doing bad things or molesting victims or fleeing the state. That wasn’t part of the equation.

And now with the bail reform, judges can assess this danger. I wanted to ensure and highlight that in Albuquerque because Albuquerque is the greatest story. Understandably 3,000 people have been remanded in custody because a judge said yes you are dangerous. And the state presented evidence that they were dangerous, because that’s the only way the judge can make that decision. The state has the burden of proving that the person poses a danger to the community…if they don’t, a judge’s hands are tied. You can’t decide whether it’s dangerous without evidence.

Question: Are you concerned that the issue of bond reform could put the judiciary at odds with the executive branch?

Question: How would you respond to criticism that the COVID emergency is being used to justify bypassing rulemaking committees, making the rulemaking process more vulnerable to political whims?

Answer: I think this criticism is unfounded. All of the programs that I’ve discussed today all had partners at the table…they had prosecutors, public defenders, judges, sometimes law enforcement. So we’re not excluding anyone from these conversations at all.

Question: Is there any justified criticism of the Arnold tool? [a pretrial risk assessment tool] and how it is used by judges? Does it bind a judge’s hands?

Answer: There is no valid criticism. The pre-trial risk assessment is just a tool and does not tie the hands of the judge at all. You are under no obligation to follow him. It is just one tool in a bundle of information presented to the judge.