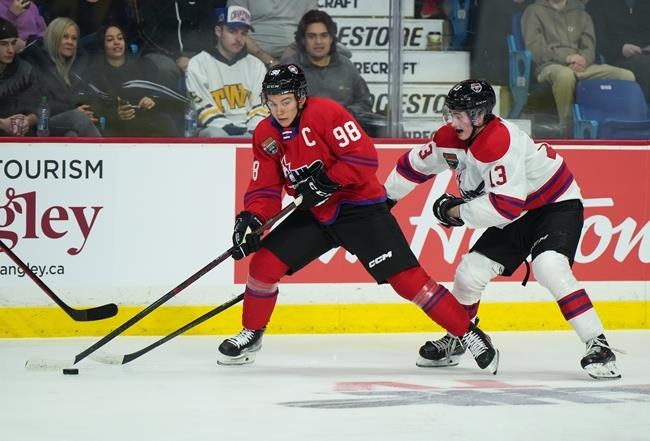 LANGLEY, BC – Carson Rehkopft scored one goal and one assist and Team White beat Team Red 4-2 in the Kubota CHL/NHL Top Prospects game in Langley, BC

LANGLEY, BC – Carson Rehkopft scored one goal and one assist and Team White beat Team Red 4-2 in the Kubota CHL/NHL Top Prospects game in Langley, BC

The game was played at Langley Events Centre, home of the Vancouver Giants of the Western Hockey League.

In a surprise twist, Red captain Connor Bedard was kept off the goalscoring chart. The 17-year-old Regina Pats star-center leads the WHL in points and is widely expected to pick first overall in the NHL Entry Draft this summer.

Benson bit into White’s lead 19:24 into the game and fired a shot past Unger.

Red pulled Robertson at 3:52 on the clock in favor of an additional attacker and Ritchie deflected a shot from Rehkopf into the wide open net shortly afterwards to make it 4:1.

Bedard seemed to get caught in the middle of White’s celebration and was bullied with flying fists by his opponents.

Bedard was sent into the pits to be matched.

Nate Danielson (Wheat Kings) set up White’s final goal midway through the third period by pulling a puck out of the corner and throwing it into the opening where Pinelli ripped a shot past the Red keeper to put his side 3-1 to lead.

Rehkopf (OHLs Kitchener Rangers) gave White a 3:53 lead in the last frame, rushed through two defenders into red territory and fired a shot past Robertson.

The mood flared just 29 seconds into the third game as White’s Kalan Lind (WHL’s Red Deer Rebels) and Red’s Alex Pharand (OHL’s Sudbury Wolves) dropped the gloves. The pair exchanged punches for several moments before being separated by officials and sent to the box with the struggling majors.

White nearly took a 14:32 lead, but a fierce shot from Moose Jaw Warriors’ Brayden Yager rattled off the post.

Earlier in the period, Red’s Riley Heidt (WHL’s Prince George Cougars) bet on a highlight rumble, guiding the puck around the back of the net and lifting it on his racquet to reach “the Michigan.” However, Ratzlaf stayed close to his post and the ensuing shot ricocheted off the goalkeeper’s shoulder.

Barlow even got Team White going with a power play goal 6:25 after Coulson Pitre was sent in by Red to save.

Bjarnson stopped Barlow’s first attempt, but the rebound landed down the left wing and he fired another shot over the goalie’s shoulder to level the game at 1–1.

Cataford opened the goal for Red 3:22 into the opening frames. The center unleashed a backhand shot from mid-slot that snuck through traffic and past the Ratzlaf Stick side.

A strange moment before the puck was released caused the crowd at the Langley Events Center to gasp.

Team White hit the ice first, and as they sprinted out of the tunnel, Dylan MacKinnon (Halifax Mooseheads) and Ethan Gauthier (QMJHL’s Sherbrooke Phoenix) stumbled over a dark carpet standing over a dark logo in the middle of the ice and flew face down the ice rink. Teammate Callum Ritchie (OHL’s Oshawa Generals) followed moments later.

All three quickly jumped up, apparently unhurt, and continued playing.