Let’s start by giving the Red Sox something they do not necessarily deserve: The benefit of the doubt.

Let’s account for the unfortunate timing of many of their injuries. Let’s excuse the unexpected collapses of three young players — first baseman Bobby Dalbec, center fielder Jarren Duran and infielder Jeter Downs. Let’s concede the 2022 season is turning out almost the opposite of ’21, when the Sox came within two games of reaching the World Series. A near worst-case scenario instead of a best-case.

For Sox ownership and chief baseball officer Chaim Bloom, the coming offseason looms as a turning point, if not a breaking point. These are the Boston Red Sox, not — as some fans lament, citing Bloom’s previous employer — the Tampa Bay Rays. It’s imperative the Sox spend big this offseason, locking up third baseman Rafael Devers and ideally shortstop Xander Bogaerts, then filling their numerous other holes. It’s imperative the team’s bizarre feast-or-famine tendencies, which the hiring of Bloom in October 2019 was supposed to correct, come to an end.

The Sox are headed for their fourth last-place finish in the AL East since 2012, and fifth if you count the pandemic-shortened 2020 season. During that period they also have made five postseason appearances and won two World Series. Fenway is indeed America’s most beloved ballpark, if whiplash is your thing.

Bloom, though, seems reasonably on track to fulfill ownership’s goal of building a sustainable contender. He and manager Alex Cora this week both received ringing endorsements from team president and CEO Sam Kennedy, who told The Athletic, “there is a strong belief in the direction of the franchise from our ownership group.” Kennedy, Bloom and Co. essentially are looking at this season as a blip, albeit one in which the front office made mistakes. It’s possible they will be proven right.

One rival executive said rebuilding might make sense for the Red Sox, considering the strength of their AL East rivals, including the rising Orioles. Bloom, however, said, “That’s not on our radar.” Nor can it be, as long as Cora is manager. As one friend of Cora’s with a rival club put it, “Alex is not a manager for a developing team. He’s a manager you hire to win.”

Cora, who did not respond to a request for comment, is under contract for two more seasons. It’s doubtful, even if he grew frustrated with the team’s path, that he would look to escape. He knows the Red Sox threw him a lifeline when they rehired him as manager in 2021 after his one-year suspension for his involvement in the Astros’ illegal sign-stealing operation.

Owner John Henry, Kennedy, Bloom, Cora — they all should be in this together, intent on fixing a team that lost its way.

“No doubt there have been injuries and some things we couldn’t control, and that’s contributed to where we are,” Bloom said. “But we’re relentless self-evaluators and we’ll always start by looking at what we’d do differently, and there’s some of that as well.” 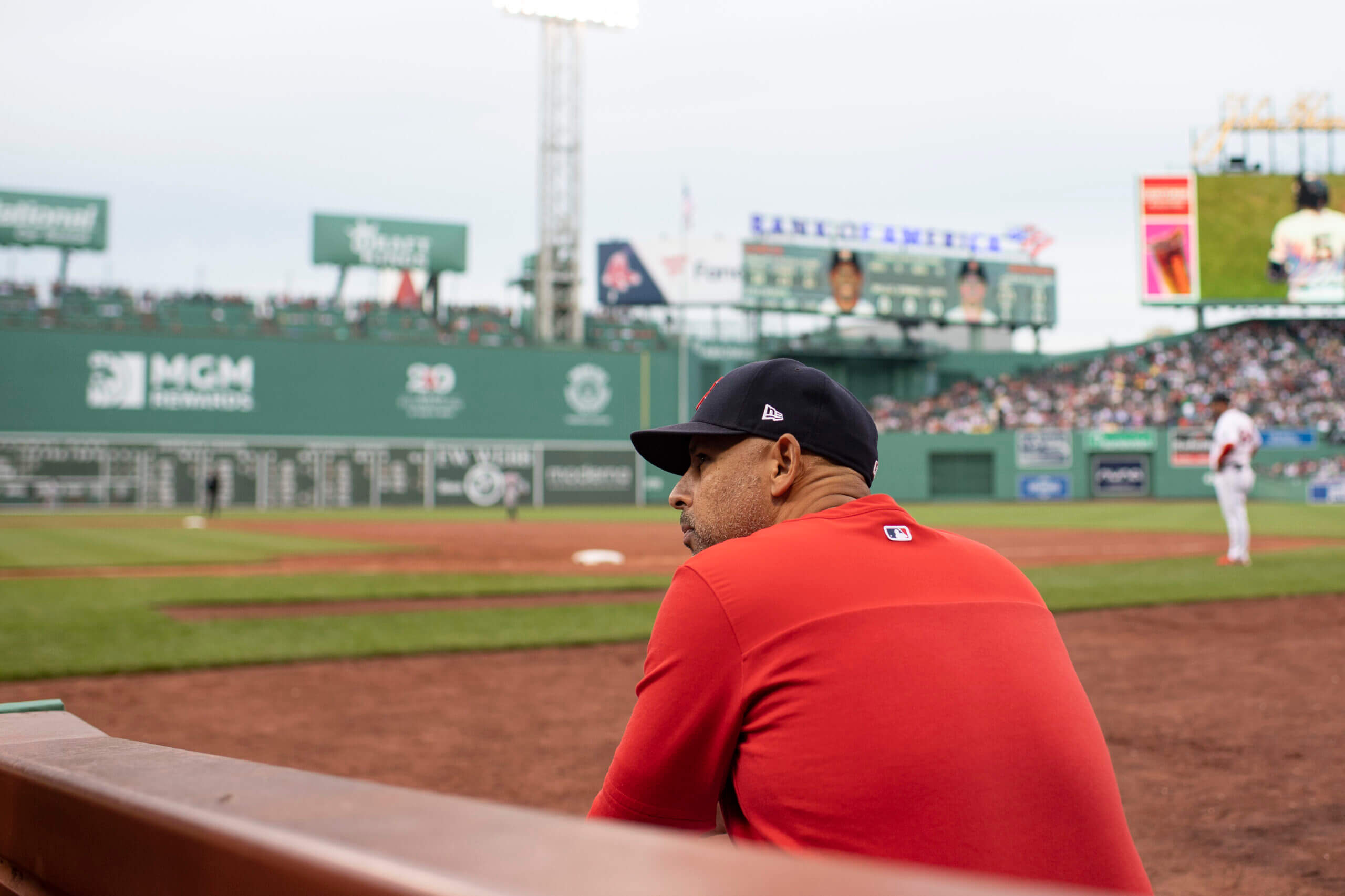 All clubs suffer injuries. Some of the Sox pitchers, in particular, do not exactly have track records of sustained health. But the returns of Eovaldi in mid-July and Hill on Aug. 1, the pending return of Wacha in mid-August and even the possibility of Sale rejoining the team in September (before he suffered his season-ending right wrist fracture) contributed to the Sox getting caught in-between at the trade deadline.

Their playoff odds, 61.3 percent on Opening Day and 80.7 percent after they went 20-6 in June, were still 28.8 percent entering the trade deadline on Aug. 2. With a team that was not totally in it, but not quite out of it, Bloom took his usual buy-sell path, trying to satisfy both the present and future.

The same strategy last offseason led to a move the Sox came to regret, the trade of right fielder Hunter Renfroe to the Brewers for outfielder Jackie Bradley Jr. and two infield prospects, Alex Binelas and David Hamilton. The exchange of talent was only part of the problem — the Sox released Bradley on Aug. 4 while MLB.com considers Binelas only their No. 25 prospect and does not rank Hamilton. The bigger issue, perhaps, was that Bloom failed to replace the offense he lost in right field with Renfroe, whose adjusted OPS this season is 29 percent above league average. That issue was compounded by Bloom’s inability to find a viable alternative to Dalbec at first base.

But back to the deadline.

Bloom added outfielder Tommy Pham, first baseman Eric Hosmer and catcher Reese McGuire. But he also subtracted lefty reliever Jake Diekman and, most significantly, potential free-agent catcher Christian Vázquez. If the Sox were trying to compete, why did they trade a player who was not only their starting catcher, but also an emotional centerpiece — and send him to the Astros, a possible playoff opponent, no less?

“I wouldn’t say we got better because we lost (Vázquez),” Bogaerts told reporters.

For two months of Vázquez, the Sox acquired infielder Emmanuel Valdez and outfielder Wilyer Abreu, whom MLB.com installed as their Nos. 19 and 24 prospects. The return could prove good enough for the end to justify the means. But here again, there was a mixed message: If the Sox were willing to trade Vázquez, why didn’t they simply take anything they could get for potential free-agent designated hitter J.D. Martinez, a move that would have enabled them to slip under the $230 million luxury-tax threshold?

“It was an organizational decision and that starts with backing from ownership to value competing and winning more than the (luxury-tax) line. And we had that backing, very strongly,” Bloom said. “We weren’t in a great position, but we had enough of a chance not to throw it away just to get under the threshold.

“In the position we were in, it would have been irresponsible to walk past a trade, especially for a pending free agent, that would really help the organization. We felt we found that for Christian. But if those moves weren’t there, we weren’t going to punt just to get under the line. Of course we knew that we still might not make it. But we had a legitimate chance with a talented group that we expected would get healthier, and it was worth honoring that and giving this group a shot. And that’s why, even while we were open to moving guys for the right returns, we also tried to find the right pieces to add.

“We felt we came out of the deadline with a stronger organization and a big league club that looked different, but was at least as good, and maybe better.”

The results barely indicate as much — the Sox, after going 8-19 in July, went 12-16 in August. Martinez continued his offensive funk, hitting only one home run between June 14 and Aug. 28. Eovaldi, another potential free agent, returned to the injured list on Aug. 22. And the Sox’s bullpen remained problematic.

On Monday, the team removed from its roster two members of its 10-man Opening Day bullpen, lefty Austin Davis (since claimed by the Twins) and righty Hirokazu Sawamura. Three others, Diekman, Hansel Robles and righty Phillips Valdez (claimed by the Mariners), also are no longer with the club. Another, Kutter Crawford, is now in the rotation.

When Bloom took over after the ’19 season, the Sox’s pitching staff included few long-term pieces. Bloom fortified the group, making perhaps his best trade to add Nick Pivetta and Connor Seabold from the Phillies, grabbing Whitlock from the Yankees in the Rule 5 draft and claiming righty reliever John Schreiber from the Tigers on waivers. Homegrown pitching, most notably rookie righty Brayan Bello, also is on the way.

Aside from the Pivetta deal, however, few of Bloom’s trades qualify as coups. One move, in particular, continues to hang over the franchise — the trade of Mookie Betts, left-hander David Price and $48 million to the Dodgers for Downs, outfielder Alex Verdugo and catcher Connor Wong on Feb. 10, 2020, less than four months into Bloom’s tenure.

Verdugo, the best player the Sox acquired, is only a slightly above-average outfielder. The return, though, was mitigated by the Dodgers gaining only one year of club control on Betts (before signing him to a 12-year, $365 million extension five months later) and taking on the other $48 million owed Price. It also was the byproduct of Red Sox ownership failing to pay Betts, who told the Boston Globe at the All-Star break that he would have remained with the Sox if they had made him the same offer.

The trade, at least, amounted to something of a financial windfall — the Sox saved not only by parting with Price and Betts, but also dropped under the luxury-tax threshold, re-setting their penalty rate for 2021. So now, if the Sox fail to sign Bogaerts and especially Devers, it will be entirely fair to ask, “What exactly was the point of trading Betts?”

The addition of Story last March at $23.3 million annually over six years seemed to signal a willingness by the Sox to allow Bogaerts to depart. Story can play shortstop, and the Sox might not consider carrying three infielders for $80 million-plus annually to be the best use of their resources. But Bloom continues to express a desire to sign both Bogaerts and Devers.

“We want to keep them both here, on deals that are going to be good for everybody,” Bloom said. “Obviously, we haven’t found those deals yet, and I know that until and unless we do, it doesn’t matter what we say. But we’re going to keep trying. Above all we want to win championships and we want to do it with both of those guys here.”

And the overall plan?

“We’ll have a lot on our to-do list, but we’ll have resources to attack those needs, and backing to do that,” Bloom said.

The Red Sox have about $92 million in guaranteed money committed for next season, or about $45 million less than the Yankees. To repair the roster, Bloom will need to go outside his comfort zone, the way he did with Story, the way another former Rays executive, Andrew Friedman, did with Betts and other high-priced Dodgers.

If Bogaerts bolts, the Sox can pursue one of the other shortstops on the market — Trea Turner, Dansby Swanson, or, if he opts out, Cora’s fellow Puerto Rican and former player with the Astros, Carlos Correa. Or, they could pursue a shorter-term solution while awaiting the arrival of top prospect Marcelo Mayer, the fourth pick in the 2021 draft.

The bullpen needs to be a priority, particularly if the Sox prefer Houck and Whitlock in the rotation. The top of the free-agent market for starters will include a number of pitchers — Jacob deGrom, Justin Verlander, Carlos Rodón, Clayton Kershaw — whom the Red Sox might consider too risky or unattainable. Chris Bassitt, who has carried his success with the Athletics to the Mets, might make sense. So would bringing back Eovaldi and Wacha on shorter deals. Sale, a wild card at this point, is under contract for two more years.

At catcher, the Red Sox can pursue Willson Contreras or Mike Zunino in free agency. In the outfield, a run at Aaron Judge would make sense, if only to drive up the price for the Yankees. But the more realistic names on the open market would include Hernández, Brandon Nimmo, Mitch Haniger and Kevin Kiermaier (in the likely event the Rays decline his $13 million option).

Plenty of free-agent DHs will be available beyond Martinez. Michael Brantley and Jorge Soler might be buy-low candidates. Trey Mancini could fit as a right-handed complement to Eric Hosmer and eventually Triston Casas at first base.

Some of these names admittedly are not sexy. But the plan should be to keep Bogaerts and Devers and build around them, sort of like Ben Cherington built around David Ortiz, Dustin Pedroia and Co. by adding a number of role players in 2013.

The Sox need to spend, and spend wisely. No more hedging. No more excuses. The benefit of the doubt, if they even deserve that much, is about to expire.