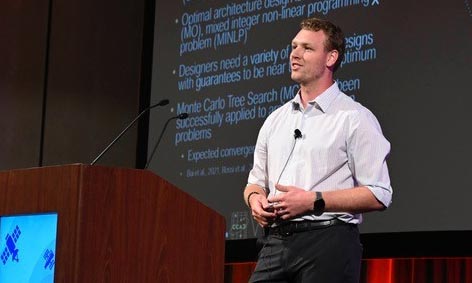 Michael Klonowski ’21 is less than two years away from Saint John’s University and his education is already out of this world.

He has a double degree in mathematics and physics and is pursuing a Ph.D. in Aerospace Engineering with majors in Satellite Navigation and Astrodynamics from the University of Colorado-Boulder. He works in a Space Domain Awareness Lab with several giant telescopes – including one that can see a million miles into space. It is something like a flight controller for objects in orbit between the earth and the moon.

“I’ve always wanted to be involved with space stuff,” Klonowski said. “This is really great.”

He drew inspiration from SJU alumni such as Paul Nakasone ’86, Mark Vande Hei ’89 and Aric Katterhagen ’96. Nakasone is a four-star general who is director of the National Security Agency, chief of the Central Security Service, and commander of the US Cyber ​​Command. Vande Hei became an astronaut and holds the American record for the longest continuous space flight. And Katterhagen is a senior operations engineer at NASA, coordinating the use of free-flying robots on the International Space Station.

Klonowski first seriously considered following in her footsteps after meeting Vande Hei at Saint John’s in 2019.

“It opened my mind to say, ‘I don’t have to just settle for a job after graduation,'” Klonowski said. “I can do something that matters, not just to me, but to the entire space community.”

He quickly makes a name for himself. Earlier this academic year, in preparation for attending a prestigious space domains awareness conference for the first time, he authored an article based on his research. Titled Optimal Cislunar architecture design using Monte Carlo Tree Search Methods (MCTS).it was awarded best student work at the Advanced Maui Optical and Space Surveillance Technologies Conference in Hawaii at the end of September.

Sieving through the “garbage” in space

Cislunar refers to the volume of space around the earth and moon. And MCTS is an algorithm Klonowski uses to find the best positions for observer satellites to maximize coverage of an object going from Earth to the Moon.

“There’s a lot of stuff up there, including a lot of junk, and there are difficulties with the interactions of the main players in space,” he said. “Russia and China are involved, and we don’t know what they’re doing, and the crowding is something that a lot of people are concerned about — especially as we see more of these constellation satellites rising.”

One example is Starlink, a system of thousands of satellites arranged in a grid pattern about 340 miles above the earth to provide Internet communications. The system is being developed by SpaceX, a company founded by Elon Musk in 2002. Companies like Amazon, with its Kuiper project, and OneWeb, a London-based communications company, are also eyeing low-Earth orbiting satellites with similar goals.

“They’re going around, and they’re all moving really fast,” Klonowski said. “Within the United States and the international community, there are very few regulations telling people how satellites are supposed to work. If there are satellites from two different entities and they have a high probability of colliding, then whose responsibility is maneuvering? If they collide, whose fault is it? Because space is so far away, it’s hard to know what’s happening up there. If an entity maneuvers, it can make things worse. If that happens, what incentives do they have to tell the truth about what happened? And if they are telling the truth, how can we verify from the ground or other satellites that they actually did something or know they are lying?”

The number of objects that people have launched into space in the last 50 years has become enormous. Identifying them and tracking their movement is part of a five-year, $51.2 million collaborative agreement between CU Boulder and the Air Force Research Laboratory. The project’s lead expert is Marcus Holzinger, an associate professor in the school’s Ann and HJ Smead Department of Aerospace Engineering, who also happens to be Klonowski’s advisor. The funding builds on a $2 million grant from the Anschutz Foundation to track and protect in-orbit satellites and a research partnership with US Space Command, both of which began in fall 2021.

Boulder to Boeing and beyond

At this point, Klonowski arrived in Boulder. Within a few months, Holzinger proposed taking on a project on the use of machine algorithms and their application to the development of Cislunar architectures. Klonowski accepted. His first major research project was funded by Ball Aerospace and formed the basis of his award-winning work.

“There are all sorts of fancy orbits that appear when you have more than two gravitational bodies,” Klonowski said. “You have the primary main masses, which are the Earth and the Moon. They combine some funky stuff, lots of chaotic dynamics with whatever comes under their influence. The study of three-body problems, as they are called, is a vast area of ​​research, and new methods are applied every week.”

He made a variety of contacts at the AMOS conference that opened his eyes to the broader industry and the potential impact of his work. AMOS, in its 23rd yearapprox As perhaps the most important technology conference in the US dedicated to space situation/domain awareness, the year featured a sell-out crowd of more than 1,200 attendees and more than 250 virtual observers. So he got an internship at Boeing in Seattle for the coming summer. He was chatting with someone who knew Holzinger and they saw that Klonowski was going to give a presentation.

“They came to listen to me and offered me a job,” Klonowski said.

It’s a long way from Rice Lake, Wisconsin, where he grew up about three hours east of Collegeville.

Unique opportunities at CSB and SJU

Klonowski’s older sister attended College of Saint Benedict, so he was familiar with SJU. But he felt he needed to go to a bigger school to be successful, and that nearly made him a big mistake.

“My cousins ​​went to Notre Dame and Carleton, and it felt like ‘blah-blah-blah’ that I had to go to a place like that to be successful,” Klonowski said. “I didn’t know any better. But Saint John’s was the first school that accepted me, and the financial package was much better than even the University of Wisconsin or the University of Minnesota.

“It turned out pretty good.”

Apparently, Klonowski took some statistics courses at SJU and CSB on his way to his double major. But he also took part in Extending the Link as a sophomore, helping to direct a documentary in Germany about Syrian refugees and immigration — something he described as “a transformative experience.” And he studied abroad in Guatemala. He credits his liberal arts education, including philosophy classes, as the very reason for his success as a Ph.D. Student and navigating in Thermodynamics and Statistics and Quantum Mechanics.

“Speaking to my colleagues now, the opportunities I’ve had are comparatively unique at Saint John’s,” said Klonowski. “I wouldn’t have become who I am if I had chased that ‘name’ school or gone somewhere bigger. I feel really lucky but I also feel very prepared.”

And where Nakasone, Vande Hei and Katterhagen inspired Klonowski, he would love nothing more than to pass it along to some future Bennies and Johnnies who are studying math or physics or are simply interested in space.

“Industry and government are very interested in getting well-rounded people who can not only analyze mathematical systems and do data analysis, but who can also participate in these conversations about space and be intelligent, contextual, and understanding people,” he said. “I think there are a lot of really smart people at Saint Ben’s and Saint John’s, and if I can do it, so can they.”