If you talk to a crypto evangelist long enough, they’ll eventually mention the unbanked — it’s one of those terms that’s been thrown around a lot in the last few years. It means what you think it means: an adult who doesn’t have a savings or checking account.

The Federal Deposit Insurance Company’s 2021 National Survey of Unbanked and Underbanked Households estimates that about 4.5% of U.S. households (about 5.9 million households) are either unbanked or underbanked. The latter term refers to households that have a checking or savings account but regularly rely on alternative financial services such as pawn shops, payday loans, and bankless check cashing — you know, robbery services.

To put that 5.9 million number in perspective, imagine if everyone in Pennsylvania were immediately stripped of regular access to banking services and placed in either a cash economy or full dependence on AFS. Then add everyone in New Mexico and you’re close.

Like offering seawater to a dehydrated sailor, crypto might look a lot like underserved banking, but it will almost certainly make things worse. And given the hardships, it seems unwise to let minor issues like a complete lack of regulation and the annihilation of over $2 trillion in value from November 2021 to November 2022 get in the way.

Still, it’s easy to throw stones and then express an opinion about a flimsy policy idea that doesn’t exist in practice. If some far-flung country had figured out a way to help the unbanked through a mechanism that didn’t expose their assets to mortal risk, then maybe we could explore that alternative instead of continuing our dalliance with speculative crypto.

The best tax system in the world

Floating in the North Atlantic, in a beautiful part of the world where puffins hold about the same place in society as pigeons everywhere else, lie the Faroe Islands. They are famous for their salmon farms – and for having “the best tax system in the world”.

The Faroe Islands Taxation System (TAKS) shares many similarities with Denmark, which is the Faroe Islands’ main trading partner and, as it happens, helped the autonomous region develop its code. Simplicity is an overriding principle – as is shifting the burden of compliance and computation to a centralized government and away from individual taxpayers. 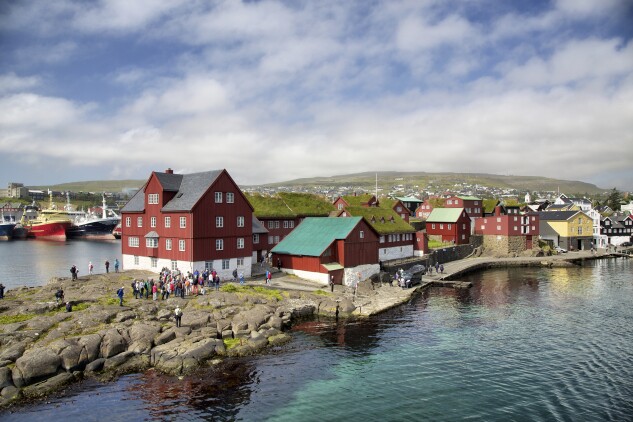 The state, not individuals and employers, monitors income streams and sets withholding amounts to avoid overpayments; Most people neither owe anything nor receive a refund at the end of the year. The latter is due to the fact that their tax system is not used as a subsidy system. Benefits accruing to residents are provided through direct payments rather than through tax deductions and credits, where individuals must grapple with the concept that a charge for a negative value equates to a credit.

TAKS is automated and to facilitate all this automation and calculation all employed Faroe Islands are required to have a bank account linked to a P number. The result is that almost every resident has a bank account and income is taxed at national, local and church taxes where applicable. So-called A-income, i.e. wages or salaries, are already fully taxed when they arrive in the employee’s account. With no real estate tax, most of this A income falls entirely under the tax system when it is remitted to the employee.

However, it should be noted that self-employed Faroese are subject to a regime that may be a little more familiar to Americans – they are tasked with estimating their B earnings and receive monthly bills based on that figure. Excise taxes will continue to apply, as expected, and will be collected in the form of VAT. Businesses must pay VAT four times a year on all sales of goods and services.

Export lessons from the Faroe Islands

What can the Faroe Islands, a cluster of islands with a combined population of 52,000, tell us about developing a solution for people with banknotes? To answer that, we first need to outline why so many people are unbanked. The US Census Bureau figured out pretty much what you’d expect last year: it boils down to money for most people.

Banks have a minimum balance requirement for a number of reasons, e.g. B. to maintain capital-to-debt ratios and charge fees when minimum balances are not met. Many banks offer better interest rates and other perks if the account holder chooses to deposit earnings via direct deposit. Forced employers to pay workers through a tax system that requires a bank account is the functional equivalent of anyone choosing to pay direct, and capital-to-debt ratios are suddenly much easier to hold.

Contrast this with a crypto-based solution for providing banking services. In this case, if the unbanked individuals are able to transact, they need internet access and some kind of electronic device. There is nothing inherent in the cryptocurrency regime that could lower this hurdle. One in five US households is not online, with about a fifth of these offline households citing the high cost of internet service at home. Although the extent to which unbanked and offline households overlap has not been established, it is safe to assume that there is some correlation between the two.

In American society, a bank account is a soft requirement of modern life. Nothing necessarily requires you to have one, and you can get by without one. But you will be taking more financial risks, and it will cost you more to do so in the long run.

Making bank accounts a formal requirement seems like an added burden for those least able to get over it, but no less than a cryptocurrency-based solution. In addition, it comes with carrot and stick for the banking industry to make banking less costly. And much like treating Internet access as a benefit, recognizing banking as a necessity for modern life will benefit consumers through integration into the tax system. Simplify the code, streamline the process, bank the unbanked, and do it all without feeding the unbanked population to the crypto wolves.

This is a regular column from tax and technology attorney Andrew Leahey, a director at Hunter Creek Consulting and a sales suppression expert. Look for Leahey’s column on Bloomberg Tax and follow him on Mastodon at @[email protected]