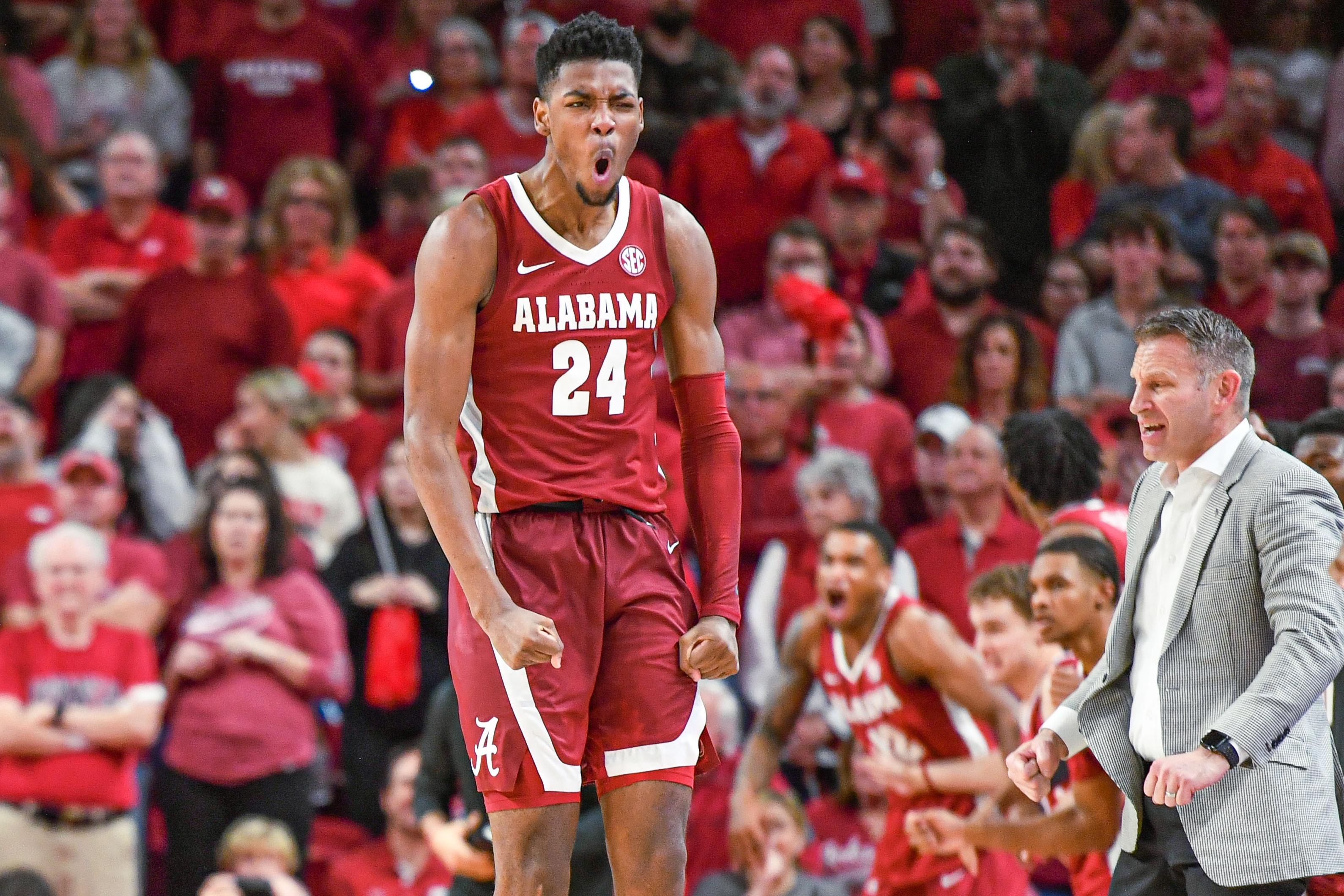 FAYETTEVILLE — Alabama and Tennessee were two of the beneficiaries of top-ranked Houston’s fall from No. 1 after the Cougars lost at home to Temple.

The Crimson Tide (17-2, 7-0 SEK) moved up to No. 2 in the Associated Press Top 25 on Monday, while Tennessee (16-3, 6-1), who had two road wins last week, rose five spots at No. 4. Alabama and Tennessee have held the top two spots in the Arkansas Democrat-Gazette power rankings for each of the three weeks the rankings were released this season.

Alabama achieved its highest ranking in the AP poll in 20 years since being No. 1 for two weeks in late December 2002 under coach Mark Gottfried.

Current Alabama coach Nate Oats was pleased with his team’s ball security against one of the country’s most troublesome defenses in Missouri.

“We made a big point of Missouri being #1 for turning the ball and getting turnover rate on defense, so we had 11 turnovers in the game,” Oats said. “If you look, Mark Sears and Brandon Miller played together for 33 minutes and almost 70 minutes respectively and only had one change between the two.”

Miller is a true freshman and Sears is a junior transfer from Ohio.

The Crimson Tide plays a return leg against Mississippi State on Wednesday before heading to Oklahoma for the final SEC-Big 12 Challenge matchup at 1 p.m. ESPN on Saturday.

Tennessee beat Mississippi State (70-59) and LSU (77-56) on the road last week to win the first of the without starters Santiago Vescovi (injured) and Tyreke Key (ill). Zakai Zeigler, making his first start since November, had a career-high 24 points, including 4-of-4 shots from three-point range, in a 40-minute game against the Bulldogs.

Vescovi and Key returned for the LSU loss in which the Vols outscored LSU 33-7 points on turnovers and hit 12 three-point shots, tying their season-high against a league opponent.

Tennessee returns home this week to play Georgia and No. 10 Texas on Wednesday at 6 p.m.

Texas A&M’s loss in Kentucky on Saturday left Alabama as the SEC’s only undefeated team in conference play.

Fans ready to see a matchup between The Tide and Vols will have to wait a while. The lone game between the conference powers is scheduled for February 15 in Knoxville, Tennessee.

The SEC has tightened the record with “wins” against the Big 12 in consecutive years, but the conference would need to go 9-1 on Saturday to finally move forward as this will be the final year of the challenge. The Big 12 hold a 48-41 record in the event’s nine previous years, with one game – Texas at Kentucky – being wiped out due to Covid-19 problems in 2021.

The SEC will take on a new challenge next season against the Atlantic Coast Conference.

Arkansas is headed against the team with the best record in the challenge, Baylor, who is 7-2. Oklahoma, Oklahoma State and Texas Tech are all 6-3 while Kansas and TCU are 5-4. The worst record in the Big 12 belongs to West Virginia (2-7), who host Auburn at 1 p.m

Florida (6-3), the only SEC team to compete in all nine events, is also the only team with six wins in the series. Kentucky and Tennessee are both 5-3, Alabama is 4-2, and Arkansas (4-4) and Georgia (2-2) are the only other SEC schools not to have lost records.

The four teams not involved in the SEC/Big 12 Challenge will compete in games televised by the SEC Network on Saturday.

Georgia hosts South Carolina at 5 p.m. Central, followed by Vanderbilt at Texas A&M. All of these teams have six conference games a week and will catch up with the other 10 teams with eight league games after Saturday.

Alabama freshman Brandon Miller has a handy 19.79-17.79 lead in the SEC’s two-points-a-game rating race over LSU’s KJ Williams. Arkansas guard Ricky Council had been second in the conference before two points in Saturday’s win over Ole Miss dropped his average to 17.16.

Tshiebwe, the reigning NCAA Player of the Year, has 14 rebounds per game, almost a point better than Purdue’s Zach Edey (13.2).

Florida coach Todd Golden called a crucial timeout as his team struggled in the final seconds to overcome the full pressure on the court in Mississippi State’s second-half comeback on Saturday.

The Gators were caught immediately after arriving from the corner at the Mississippi State baseline with 44 seconds left in the game and a 61-59 lead. Guard Myreon Jones had to throw the ball off a Bulldog just before going out of bounds with 39.2 seconds left.

After a time out to check possession, Florida came in to guard Will Richard, who hesitated a few seconds before throwing back at Jones. Jones just hoisted a long pass past halfway, called Golden, and was granted a time-out. Jones’ passport airmailed Richard and went out.

“Good time out there because they had a second before there would be a 10-second count,” said ESPN analyst and former Arkansas Razorback Joe Kleine.

Florida missed a three-point shot on his possession but held the Bulldogs back when DJ Jeffries missed a short bank shot and Cameron Matthews missed a tip-in attempt near the final buzzer.

Auburn’s Wendell Green has taken the SEC lead in free throw percentage at 83.6%, which is easily on track to become the lowest clip for the SEC leader in the past decade.

The lowest free throw percentage for an SEC leader over the past 10 years was 87% by Arkansas guard Dusty Hannahs in 2015-16. Hannahs would speed the SEC at 90.8% the following season, then guard Daryl Macon made a three-peat for the Hogs the next year with an 87.5% clip.

Alabama and Tennessee lead with four SEC road wins each. The Crimson Tide won in Mississippi State, Arkansas, Vanderbilt and Missouri by an average margin of 11.8 points.

The volunteers have won street affairs in Ole Miss, South Carolina, in the state of Mississippi and at LSU.

Auburn has three straight wins at Ole Miss, LSU and South Carolina, averaging 14 points per game. Florida and Texas A&M each have two away wins.

The only four SEC teams without a road win are Arkansas, LSU, Mississippi State, and Missouri.

South Carolina has lost all four of its SEC home games, incredible by an average of 27.8 points, including 40-plus point losses to Tennessee and Texas A&M.

Alabama, Auburn and Texas A&M are the only SEC teams not to suffer a home conference setback.

Oddly enough, there are no SEC teams that are unbeaten at home and winless away.

Kentucky’s Oscar Tshiebwe and Tennessee’s Julian Phillips were named Monday’s SEC Player of the Week by the league office.

Tshiebwe, a 6-9 senior from Congo, was named SEC Player of the Week after averaging 22 points and 20.5 rebounds and hitting 60% field goals in wins against Georgia and Texas A&M, including a career-high of 37 points and 24 rebounds the Bulldogs. He now owns five of the seven games with 20+ points and 18+ rebounds by an SEC player in the past 10 years.