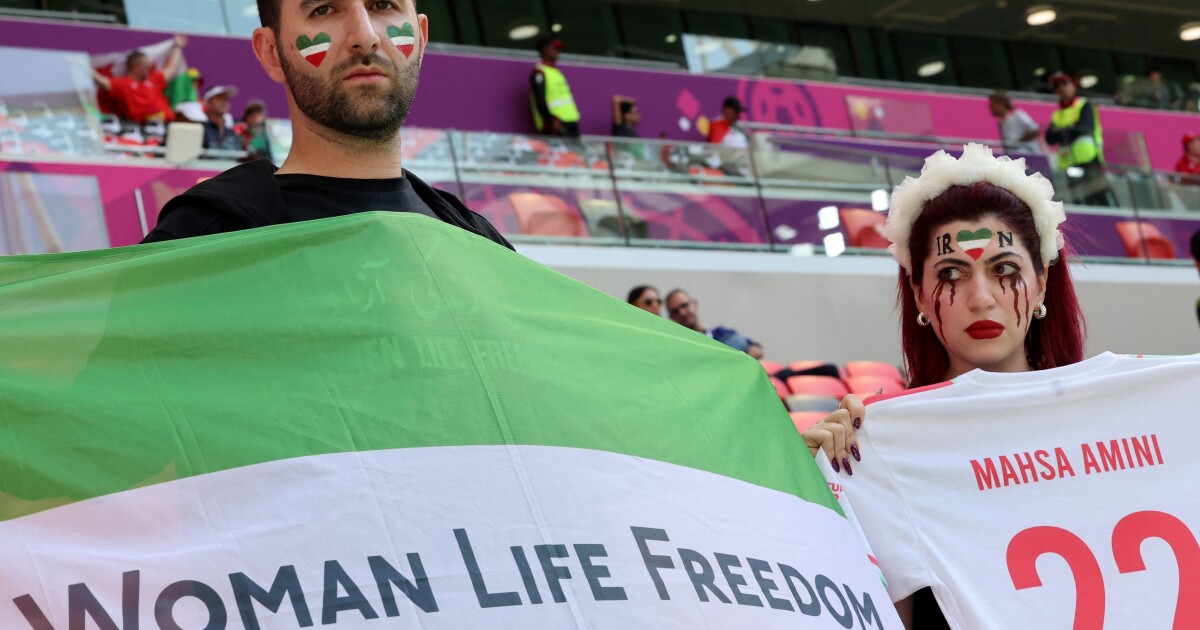 Qatar warned of dress restrictions for this year’s World Cup and fans are finding the officials weren’t bluffing to crack down.

The FIFA Code of Conduct in Stadiums for this year’s event, which came into effect in July, prohibits fans from bringing any tools or weapons, flags or any other material deemed political or discriminatory. It also indicates that helmets or masks covering the face, other than a medical mask and/or national and religious headgear, are not allowed.

In addition, it prohibits “disrobing” and removing clothing to reveal “intimate body parts.” The details of these definitions are somewhat vague. In a country like Qatar, where conservative dress is encouraged, this might mean something more modest than other cultures are used to.

But at least a couple of times, controversial outfits have slipped out at stadiums. Here are some instances where the choice of attire at the World Cup has caused an uproar.

Iranian fans have used clothing – both in hand and worn – to protest Mahsa Amini’s death. The young woman died in the custody of the Iranian moral police, who arrested her for wearing what they believed to be inappropriate clothing.

A fan who wore a t-shirt that read “Woman, Life, Freedom” at last Tuesday’s Iran v Wales match had to change before she could watch the match because the words are a Kurdish slogan used by women’s rights protesters.

A protester held up an Iranian football shirt with Mahsa Amini’s name and her age, 22, ahead of the same game. The protester wore makeup that looked like blood dripping from her eyes. Beside her, another protester displayed an Iranian flag with “Woman Life Freedom” written on its center white stripe. They were both approached by security guards who appeared to take the shirt and flag.

Security forces confiscated some Welsh fans’ rainbow bucket hats, which symbolized their support for LGBTQ rights. The Rainbow Wall, the group behind the hats, wrote that only the women were asked to take off the hats.

US journalist Grant Wahl said he was detained for 25 minutes for refusing to remove his rainbow shirt.

In his Substack column, he wrote that a security commander later approached him to apologize and say they would let him through.

“One of the security guards told me they were just trying to protect me from fans in the house who might harm me for wearing the shirt,” he wrote in the column. “The whole episode made me wonder: how is it for ordinary Qataris who might be wearing a rainbow shirt when the world isn’t watching?”

I’m fine, but that was an unnecessary ordeal. I’m in the media center, still wearing my shirt. Was detained for almost half an hour. Go gays 🌈 https://t.co/S3INBoCz89

Costumes of the Knights Templar

At other football matches, England fans have dressed up in faux chain mail, swords and shields. FIFA has reportedly asked participants not to wear these costumes as they appear to be inspired by the Knights Templar.

The Knights played a major role in the Crusades of the 12th and 13th centuries, when Christian Western Europeans fought to wrest sacred sites from Muslim control.

“Crusader costumes in the Arab context can offend Muslims, so anti-discrimination colleagues urged fans to wear inside out or change their clothes,” said a FIFA official The times.

Two England fans dressed as knights were reportedly stopped and forced to strip naked before they could see what was left of the match.

Photos from England’s game against Iran show that people were in the stadium wearing the outfits.