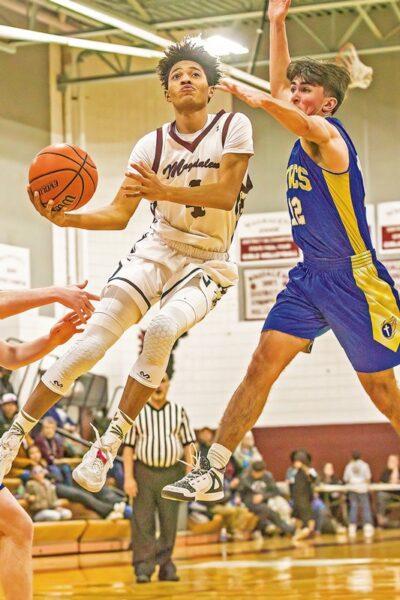 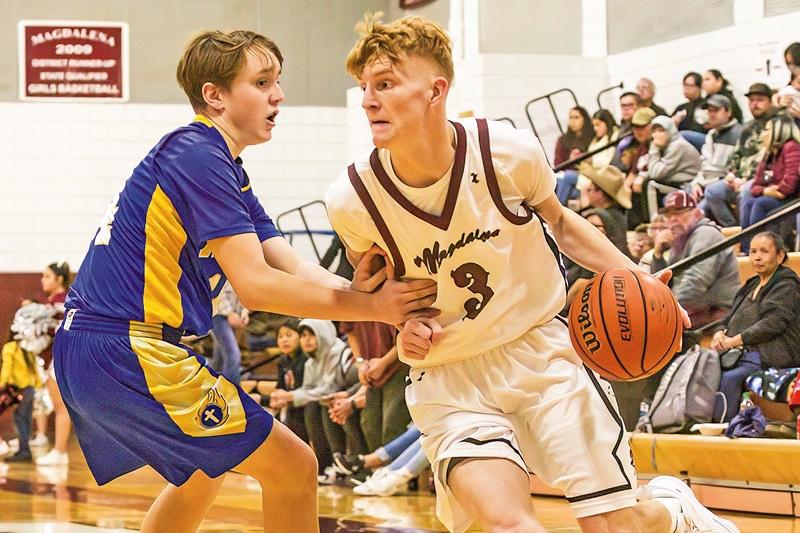 Magdelenas Kael Stephens works his way out of the corner and into the basket against Mesilla Valley.
Russell Huffman | El Defensor chief

Before Saturday’s contest, 5A Volcano Vista was the only other undefeated boys’ team in the state, but the Hawks fell to Cleveland 53-50, leaving the Steers as the only team with an unblemished record. Volcano’s 47-game winning streak is the third-longest in New Mexico and was just six games behind the Hobbs’ all-time mark of 53 contests.

That fact comes after the Steers retaliated against the only team that beat them in last year’s title fight. Tularosa defeated Magdalena 67-56 last year, but the Wildcats were no match for the Steers on Jan. 20 in a 63-25 rematch win for the defending champion.

Winning streaks are hard to sustain and records are hard to beat, but for those who count, Magdalena has posted a stunning 93-2 over the past four seasons. 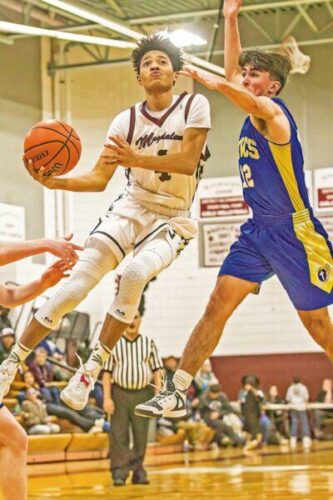 The Wildcats and winning streak were the last things on the Steers’ minds when they faced Mesilla Valley, and while it’s sometimes difficult to praise Magdalena coach Jory Mirabal, he admitted his team is developing the way he is had hoped for.

“I think we’re making progress in that direction, where are we now, where we want to be? Yes, we are, but we want to be somewhere else in eight weeks,” Mirabal said.

If Mirabal is where he wants to be in eight weeks, it will lift his team’s third straight state trophy and the Steers certainly have the tools to get the job done.

Against Mesilla, the Steers opened with an 18-9 run and almost doubled the SonBlazers with a 21-11 in the second quarter. Kael Stephens shot into the net in the first frame with eight points, Joseph Zamora caught fire in the second frame with 10 points and stayed on target in the second half with nine points in the third quarter.

The SonBlazers put much of their defensive focus on D’Shaun Vinyard, who had 20 points that night while making several trips to the free throw line. Vinyard had 10 of the Steers’ 14 free throw opportunities.

Zamora’s 25 points surpassed all scorers and Stephens had 18, which is the basic formula Mirabal is looking for to round out his team’s offense.

“There is still room to grow. But yeah, I’ve seen that transition (the growth of the steers’ inside game) over the summer into the off-season into the early games so far where we’re feeling a lot more comfortable in the sets we’re trying to run,” Mirabal said .

In their district opener against the reserve, Stephens had a season-high 25 points. Jeff Stuteville had a double-double with 12 points and 11 rebounds, and 6th man Kaleb Castanon had a career-high 12 points.

Castanon also provided a defensive spark when he got into action against the SonBlazers.

“Caleb is a little spark plug. I mean, he’s our energy guy. He’s been waiting for his chance and is working hard and practicing hard. He’s taken a year off and has come back to business in the last two years and he’s delivering that energy,” Mirabal said. “Then tonight we’re playing the team with five guards and so I wasn’t exactly able to use my big boys defensively the way I wanted to with Jeffery’s nasty problems.”

The Steers are going on a road trip this week with a Jan. 26 game at Animas and a subsequent battle with Cliff to determine who will be the district’s first-half leader on Jan. 28. Magdalena returns home on February 2nd and 4th to play Quemado and reserve.