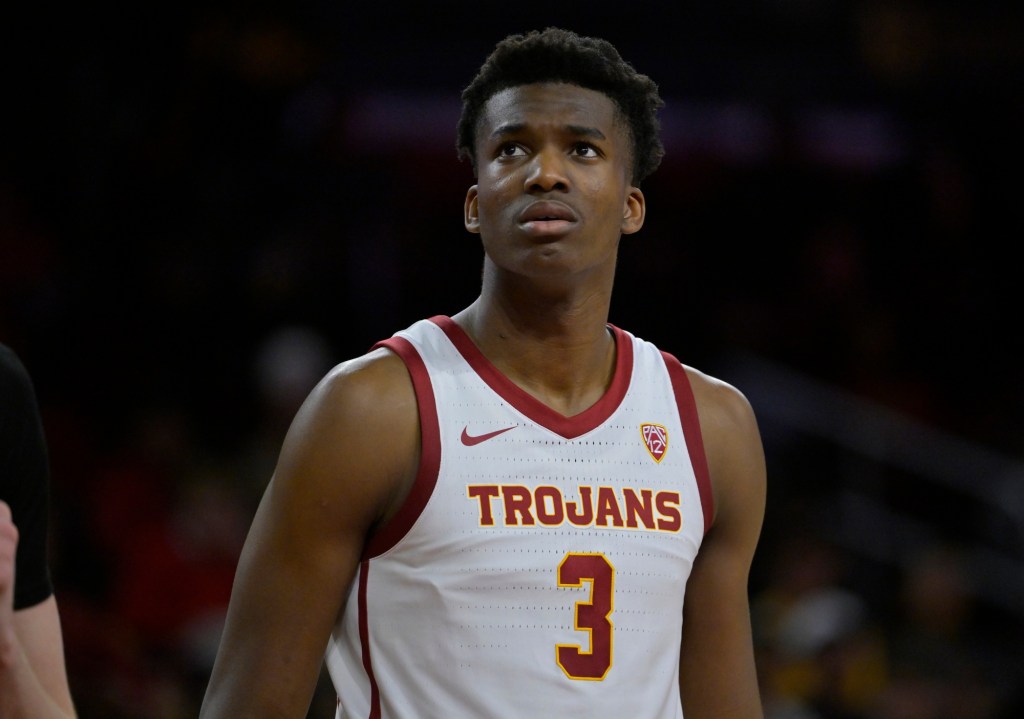 LOS ANGELES – A defensive rebound. That’s all that stood between USC men’s basketball and an upset win over UCLA at Pauley Pavilion three weeks ago. A defensive rebound and the Bruins had no choice but to foul the leading Trojans, who then extended their lead with free throws.

Instead, no one boxed out David Singleton, who ran out of the corner to snag the loose ball and passed it to Jaylen Clark for the 3-pointer. And the Trojans’ comeback in the second half was in vain.

As the Trojans prepare for the rematch against their crosstown rivals at the Galen Center Thursday, they’re hoping someone who didn’t play in the first matchup can make a big difference.

Since USC and No. 8 last hit UCLA, freshman center Vincent Iwuchukwu has arrived. The former five-star recruit did not play in the first 16 games of the season after recovering from cardiac arrest during a summer training session. He made his debut following the UCLA loss to Colorado but was a step slow in his first two games as his body caught up with his teammates.

But last week, Iwuchukwu started to find his way. He scored his first career points against Arizona and then officially announced himself in USC’s win over Arizona State. He scored 12 points in 5-for-8 shooting and grabbed five rebounds. He also blocked a shot and had a thunderous put-back dunk, all off the bench in 14 minutes.

“I almost got a tech and my husband almost scored on the other end [while] I’m over there celebrating with him,” said his USC freshman Tre White. “That’s what they cooked me for in the movie, but I’m with you Vince, I’m with you.”

In the matchup against UCLA, Iwuchukwu provides what USC was missing three weeks ago: size.

With Joshua Morgan having an off night, UCLA freshman forward Adem Bona had his way to the paint in the first half. The Bruins won the rebound 36-30 and of course there was that last fatal miss on the glass.

Though Iwuchukwu still has a minute limit as his health continues to be monitored, teammates are noticing the difference he’s making behind them at the defensive end of the pitch.

“Sometimes you do your best to get guys off the line and cordoned off, but when I have Vince out there, and Josh and all our big men, I feel like I have a safety net where I know when I’m hit He’ll protect shots, block them and things like that,” White said.

“I think he finds his timing. He’s certainly improved dramatically since the Colorado game,” added Trojans head coach Andy Enfield. “When Vince plays at this level it helps our team. I think both teams are pretty balanced and it will come down to which team performs the best and who plays the hardest.”

It will still be Iwuchukwu’s first taste of the rivalry. But for all the underclassmen who seemed unnerved in the first half against UCLA three weeks ago, there’s a feeling they’ve benefited from that experience and won’t be surprised by the rivalry.

“You hear about the rivalry, but actually it’s a very different vibe,” White said. “Experience helps, but it was really up to us. We had chances where we blocked them but we didn’t do our little, little things to execute them. But I feel like this game, we’ve got quite a few games under our belt, we’ve got this energy and we’re ready for it.

Where from: Galen Center