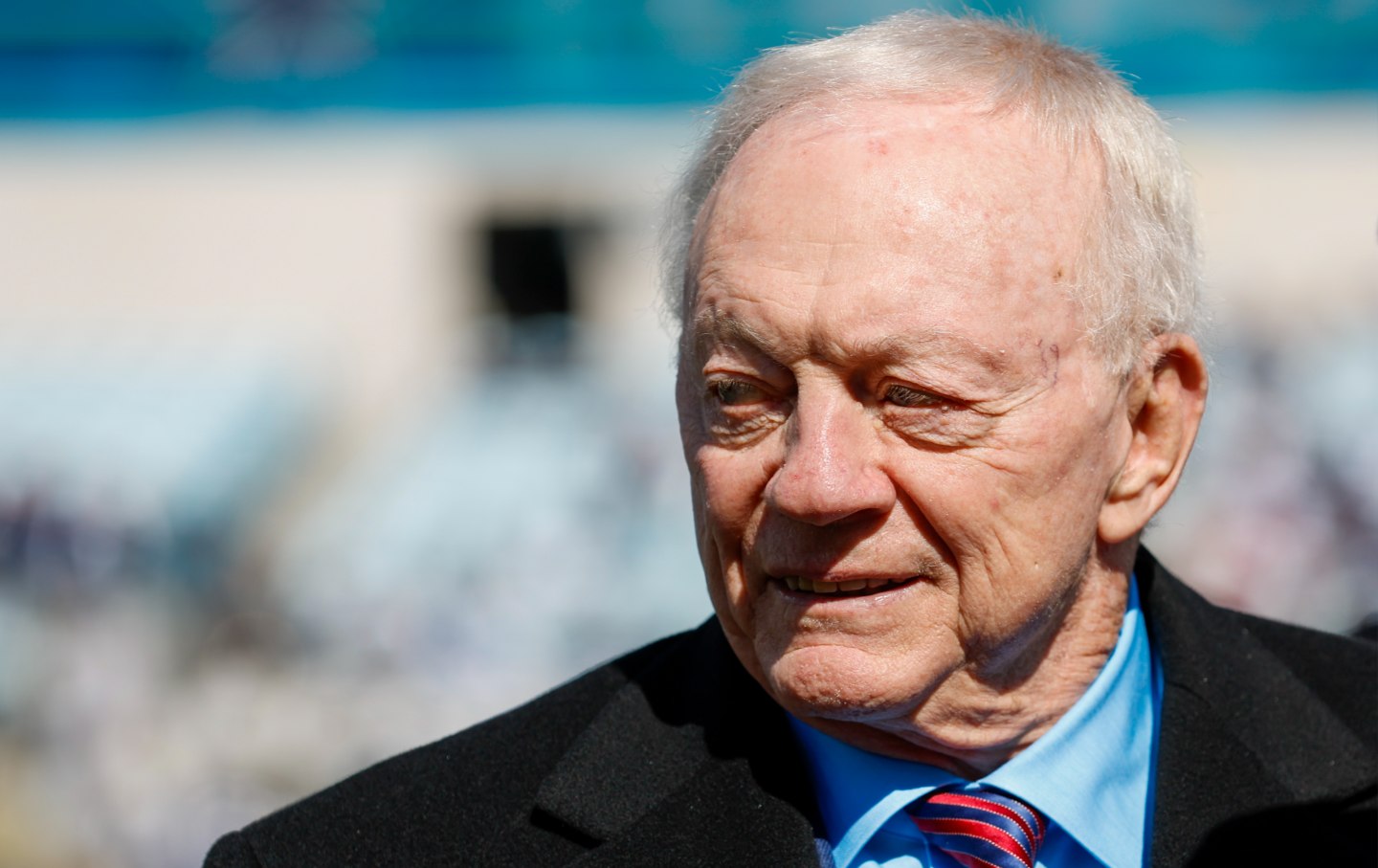 Dallas Cowboys owner Jerry Jones looks on during the game between the Dallas Cowboys and the Jacksonville Jaguars at tIAA Bank Field December 18, 2022 in Jacksonville, Florida. (Photo by David Rosenblum/Icon Sportswire via Getty Images)

Thank you for signing up The nation‘s weekly newsletter.

Thanks for signing up. For more of The nationcheck out our latest issue.

The nation Reader Supported: Enter $10 or more to help us keep writing on the things that matter.

Did you know you can support? The nation by drinking wine?

As Dallas Cowboys head coach Mike McCarthy walked off the field after a bitter and frustrating 12-12 playoff loss to the San Francisco 49ers, he roughly pushed a cameraman away. But that wasn’t even McCarthy’s most embarrassing moment in the closing moments of the season. That happened on the last play of the game, where he inexplicably ran back Ezekiel Elliott after a touchdown and traded the ball to quarterback Dak Prescott. Elliott was predictably “pulled” by a 49ers player – knocked down with extreme force. Before he could be released, Prescott threw a five-yard pass and his receiver was immediately tackled. It was a horrible end to a season that showed so much promise. For Coach McCarthy and Prescott, it was also reminiscent of last year’s playoffs, where they were also narrowly beaten by the 49ers in a close game that ended in a similarly ridiculous play when Prescott ran with the ball to allegedly hit a prepare for the last desperate game, and instead the clock ran out.

Since the 1970s, the Dallas Cowboys have been known as “America’s Team” — a nickname that’s a little cheeky in this time of America’s decline. Though the Cowboys haven’t won a championship in 27 years, the team and pundits still trumpet the nickname. The long Super Bowl drought is an indictment of Cowboys owner Jerry Jones. He is the Cowboys’ top decision-maker and has been the common variable for the last three decades. He’s the one who hires the coaches who inevitably fail and signs the big-money players who invariably disappoint.

After the game, Jones looked gaunt even for an 80-year-old man. To his credit, or maybe just to satisfy his bottomless ego, Jones faced the media before the sweat dried on the players. He called the game “sickening” and used the word “sick” six more times in the space of two minutes. He was sick for the fans, sick for the players, sick for the coaches and most of all, as he said in a voice that never sounded raspy, sick for himself.

While Jerry Jones felt sorry for Jerry Jones (perhaps even “sick”), there was something ironic about McCarthy and Prescott’s demands to be “held accountable” for the loss. There is no way to hold Jones accountable. The only person who can do that to an owner — barring a compliant media or boycotting fans (and nobody boycotts cowboys football in Texas) — is Jones himself. However, Jones has never blamed himself for anything, let alone his miserable tenure as Owner/CEO (rarely a recommended combination). But not holding yourself accountable is really the theme of Jones’ year. A 1957 Associated Press photograph shows black students attempting to attend and integrate classes at North Little Rock High School. A group of white students taunts them and physically – and successfully – denies them entry. Jones was among their ranks. It’s like a youth clan rally without the white hoods. Jones didn’t address the photo until he said he was just a “curious kid.” He then said: “I didn’t know at the time what a monumental event was really going on and I’m sure glad we’re far from it. I am. And that would remind me to keep doing everything I can to prevent things like that from happening.” Then he reflected that his only concern was that the football coach, who had warned his players not to attend the mob gathering, would find out that he was there and he would get in trouble. After these comments, the story unraveled. This was a case where the media could have blamed Jones for his actions but chose not to.

But this story is important because in this case the past can be the prologue. Jones never hired a black head coach during his time with the Cowboys, while also flouting the league’s “Rooney Rule,” which encourages executives to interview black coaching candidates. Jones also took the lead among owners as the league cracked down on Colin Kaepernick, Eric Reid and players who knelt during the playing of the national anthem to protest police brutality and racial inequality. And yes, Jones is a major backer to Texas Gov. Greg Abbott. whose rancid anti-Black history policies and incessant attacks on trans children speak for themselves. This is Jones. Nobody, not even himself, will ever hold him responsible for his decisions. This is particularly obscene in a sport totally dependent on black labor and the endangerment of black bodies and minds. We’ve passed the point where Jones should have been held accountable by fans and the media. If its policies don’t, perhaps the lingering stench of failure will.

Dave Zirin on the NFL