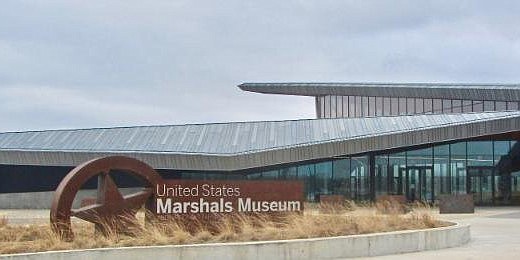 FORT SMITH – After years of floating like a mirage on the western Arkansas horizon, the long-awaited US Marshals Museum is finally a solid reality, set to open this summer.

Visitors to the waterfront site on Riverfront Drive, one mile north of Fort Smith National Historic Site, can now view the museum’s completed exterior. Its low silhouette is as smooth as the western border between Arkansas and Indian Territory was sharp in the late 19th century. Back then, Federal Marshals formed a weak law and order front line that stretched into what later became Oklahoma.

It’s also possible to shop remotely at The Outpost, the museum’s gift shop. The online mercantile center is open at us-marshals-museum.myshopify.com. At the top of the items is a $249.99 Commemorative Airshot Pistol. Less expensive impulse buys include a $14.99 pint glass engraved with “You Can Run But You Can’t Hide” — a taunt for unscrupulous fugitives.

“Right now, all we’re saying is that the opening will be in the summer,” said Susan E. Neyman, the museum’s chief development officer and foundation president. “The 20,000 square foot ‘shell’ that the interactive exhibits will occupy is nearing completion. Our partners at Thinkwell Group, a global design agency, will begin delivery of the exhibit components in early March.”

After that, an exact opening date can be set, says Newman, “and from our point of view: the sooner the better. We hope to invite some school or travel groups as a test run. There will be a public ‘opening’ ceremony on our first full day of operation and one hour later.”

Fort Smith’s quest to establish the US Marshals Museum began in 2004 with an application to an ad hoc federal selection committee. The museum’s mission was formulated as follows: “To tell the rich history of America’s oldest federal law enforcement agency, the Constitution, and the rule of law through immersive and interactive exhibition experiences that will educate and entertain visitors of all ages.”

In 2007, Fort Smith was chosen as the location alongside half a dozen other locations across the country. In 2009, local planners unveiled a star-shaped design that was later scrapped in favor of the current stylish configuration.

In 2010, donations reached $6 million. In 2013, the 16-acre site along the Arkansas River was selected, but a dispute with the US Army Corps of Engineers delayed work. After a decision was made at the end of 2015, the opening of the museum was announced for September 24, 2019.

After further delays, a $19 million building permit was granted in 2018. In 2019, a $15.5 million funding shortfall was reported before additional efforts provided enough money to complete the long-awaited project. The capital campaign has raised more than $46 million to date, falling less than $4 million short of its target.

The museum hopes to attract travelers from across the country and expand Fort Smith’s tourist appeal beyond the regional scope of the Fort Smith National Historic Site and other frontier-era attractions.

When the museum opens, says Neyman, “aside from the breathtaking view of the Arkansas River through the glass walls on the west side, its most impressive aspect will be the nearly 20,000 square feet of exhibition space.

“There will be five galleries plus an additional space for temporary exhibitions covering the history of the US Marshals Service from 1789 to the present day. Visitors shouldn’t expect to see just ‘stuff under glass’, but instead, cutting-edge art, interactive and immersive exhibits that allow them to actively participate in the experience.”

The five rooms as described by Neyman include:

◼️ Marshal Gallery, the starting point for visits, will include a timeline of the agency’s history. It will explain the duties of marshals throughout US history and answer questions like, “What does it take to be a marshal?”

◼️ The Frontier Marshals Gallery presents both the legends and true stories of the Marshals of the Old West, with “the true stories taking center stage and being no less compelling than the enduring images of film and television”.

◼️ The Changing Nation Gallery explains that since its inception 234 years ago as the first national law enforcement agency, the Marshal Service has changed in many ways. Visitors can test their skills in the interactive Marshals Challenge exhibit.

◼️ The Modern Marshals Gallery guides visitors through some of the agency’s training requirements and “highlights the character traits that make candidates best suited to the marshals’ uniquely flexible responsibilities”.

◼️ The Campfire: Stories Under the Stars is the central hub of the experience, where visitors hear the conversations between four Marshals, one from each century of Marshal history. As the marshals tell their stories, images are projected onto the rock face up in the shade of the campfire.”

The frontier narrative of Fort Smith “lives in our exhibition experience,” says Neyman. “The main focus on western Arkansas will be the time that most of us think about – the era of the famous judge [Isaac C.] parkers But the museum is national in focus and will cover the history of marshals across the country from 1789 to the present day.”

For information about the US Marshals Museum, see usmmuseum.com. For details of other visitor attractions at Fort Smith, see fortsmithar.gov or call (479) 783-8888.