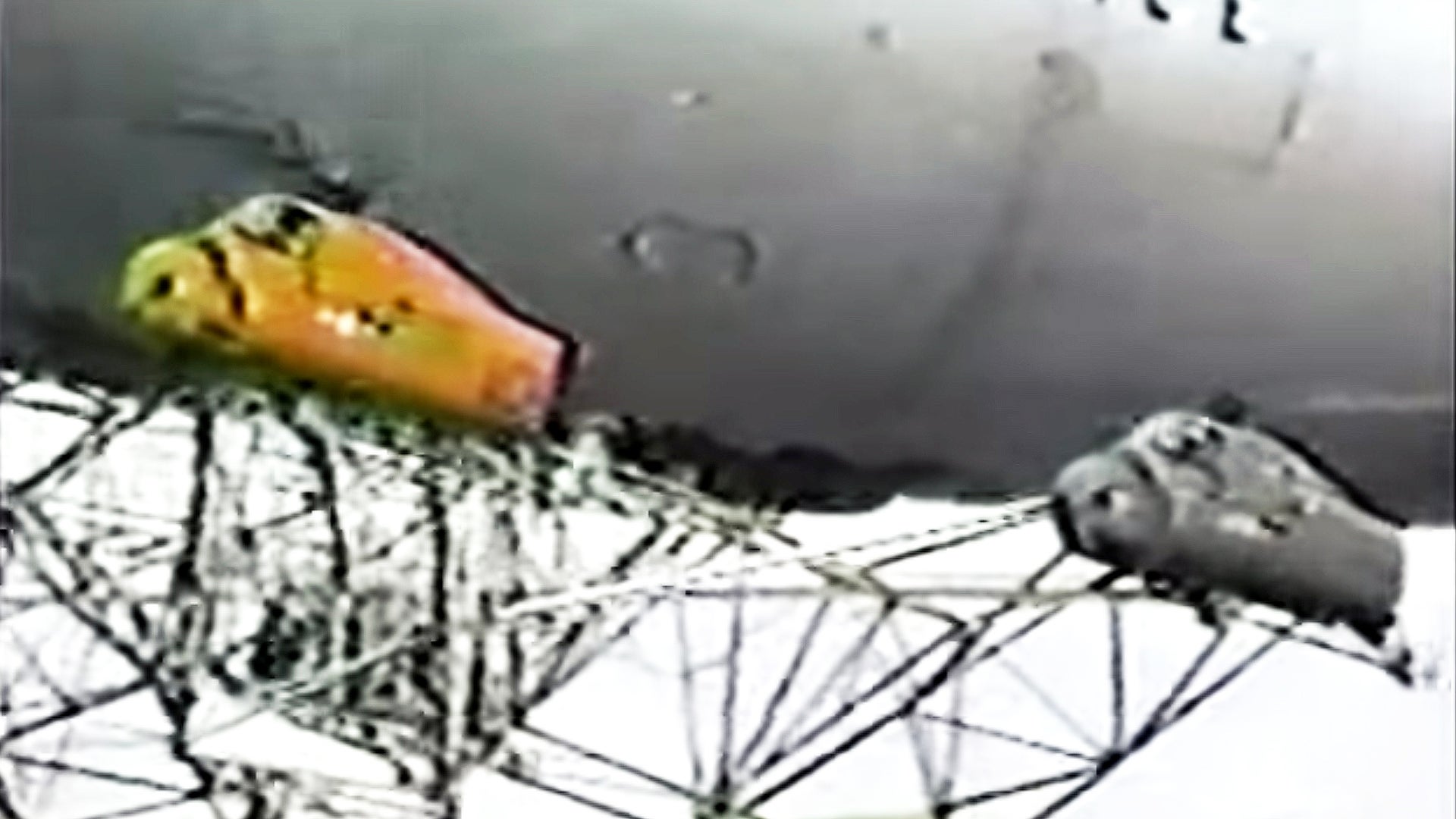 The monstrous experimental Piasecki PA-97 Helistat heavy lift aircraft looked like something straight out of a steam punk fever dream or like a scrawl on an elementary school student’s paper. Featuring a large, helium-filled airship hull flanked by four repurposed helicopter fuselages, all connected by a rickety frame, it’s not too hard to see how the bizarre contraption eventually met its demise during a 1986 flight test.

The PA-97 Helistat was one of several vertical lift concepts to come out from Piasecki Aircraft towards the end of the 20th century, but this particular design was particularly ambitious. The company slammed four Sikorsky H-34J helicopter fuselages with pusher propellers in place of their tail rotors onto an aluminum frame under a helium-filled airship envelope. In this configuration, Helistat should prove that combining the dynamic lift capabilities of a helicopter with the buoyancy of a blimp could offer a unique solution for heavy loads in the air, which above all is very economical.

Before the helistat, however, Piasecki first became a household name in aviation in 1940 when Philadelphia native Frank Piasecki founded the PV Engineering Forum with his University of Pennsylvania classmate Harold Venzie. Three years later, the group designed the single-seat, single-rotor PV-2, which, according to Piasecki’s website, was the second helicopter to successfully fly in the United States.

Also during his time at the PV Engineering Forum, Piasecki inadvertently became the first pilot of the PV-2 after a tether broke during a flight test, forcing him to briefly fly and land the helicopter. This happy coincidence allowed Piasecki to qualify for the United States’ first helicopter pilot’s license.

After the PV Engineering Forum received a Department of Defense contract in 1944 to develop a twin-rotor helicopter that would not be stalled by the size and weight limitations of single-rotor types, the PV Engineering Forum also produced the HRP-1 during World War II . The HRP-1, referred to internally as the PV-3, became famous as the “Flying Banana,” and this type was instrumental in ushering in the helicopter age for the US military.

In 1955, however, Frank was ousted from the PV Engineering Forum by his fellow co-owners after a dispute, prompting him to start his own aerospace company. In 1955, today’s Piasecki Aircraft Corporation (PiAC) was officially founded to research and develop experimental rotorcraft and compound helicopters. Having already established himself as a pioneer of the tandem rotor helicopter, the aircraft developed by Piasecki and PiAC laid the groundwork for future mainstream platforms such as the CH-47 Chinook.

But that’s not to say the company wasn’t responsible for some wacky inventions nonetheless, and the helistat is no exception. For example, the PA-59 AirGeep, a highly unconventional prototype using two horizontal ducted rotors in tandem, was envisioned by PiAC in the late 1950s as a vertical takeoff and landing concept roughly resembling a flying car. PiAC designed it specifically to meet the requirements of a US Army Transportation Research Command contract for a flying jeep to be smaller and more maneuverable than a helicopter, although the aircraft never left the experimental phase.

It wasn’t until the 1960s that PiAC began fighting the giant that would later become Helistat. In 1961, PiAC received a patent for what the company dubbed the “Helicopter Ballon Aircraft Unit,” which involved the attachment of a large spherical balloon to a central frame connected to two tandem rotor helicopters.

In order to achieve this, PiAC had to determine what exactly the frame of the unit would look like. In 1972, the company released a Naval Air Systems Command-sponsored study on the feasibility of a Multi-Helicopter Heavy Lift System (MHHLS) using two Sikorsky CH-53D helicopters. However, we now know that the final design ultimately used four H-34J helicopter fuselages. According to the PiAC website, the company later referred to the MHHLS concept as the PA-39.

Finally, in the mid-1970s, the company presented the concept of the heavy-lift balloon aircraft to the US Forest Service. The submission was presented as a solution to the Forest Service’s need for an aircraft capable of lifting significant loads of timber from otherwise hard-to-reach areas. According to an article in the Modern airships In a series written by aviation historian Peter Lobner, the research and development program for this logging system was dubbed Project Falcon and was spurred by increasing population demand for wood, as well as an “increasing concern for the natural environment”.

Lobner went on to explain that the Forest Service wanted an aircraft that could carry 25 tons of timber up to five miles while flying over steep mountainous terrain. From the start it looked like the PA-97 concept might be capable of this, so in 1980 the Forest Service funded a $10.7 million contract through the Naval Air Development Center and awarded it to PiAC for development and testing of Helistat.

The total cost of the program was estimated at around US$25 million, including construction, flight testing and a three-year demonstration phase. Lobner wrote that while the PA-97 should help rake in millions of dollars in lumber sales once in service, PiAC also saw its potential in supporting maritime patrols, military transport, and other construction activities.

The PA-97 prototype eventually grew to be 343 feet long, 113 feet high, and had a gross weight of 107,051 pounds, according to Lobner’s article. In 1981, however, the program later known as the Government Accountability Office (GAO) reviewed the program and concluded that PiAC, the Forest Service and the Navy should step back and reevaluate their progress before proceeding after Helistat’s skeletal structure had failed stress tests.

After a redesign of its rigid frame to address GAO concerns, as well as several static and tethered demonstrations over the following years, the PA-97 made its first free flight on April 26, 1986 at the Naval Air Engineering Station in Lakehurst, NJ Place steeped in history of lighter-than-air flight. Lobner wrote in his article that a pilot in the left rear helicopter cockpit flew the helistat while flight engineers manned the other three fuselages.

The plane would only lift itself into the air one last time after its maiden flight.

On July 1, 1986, Helistat managed to lift off just a few feet from the ground before suffering what is known as “vibration-induced structural failure” that negatively affected the performance of virtually every component on the aircraft. In the video of the disastrous flight test, you can see the starboard-tail helibody breaking out of its mount on the frame due to vibration, causing its rotors to slice into the gas-filled airship hull.

An implosion quickly follows, as does the crashing of the remaining helicopters onto the tarmac below. Pilot Gary Oleshfski was killed in the accident and the PA-97 program was abruptly terminated along with the destruction of its only prototype.

As Lobner notes, while PiAC expected the PA-97 to usher in an age of helistat proliferation nonetheless, the aircraft was the only US-made type of its kind that could fly. That’s not to say that heavy lift lighter-than-air aircraft and similar airships haven’t come back into vogue since then, at least conceptually, but none have been truly successful for the heavy lift mission.

All in all, for all of its experimental and sometimes odd contributions to modern aviation, PiAC is still a forward-thinking player in the industry. This is especially true given the company’s role in researching vertical lift. For example, the experimental X-49 high-speed compound helicopter is another innovative design that Piasecki was behind to study how to significantly increase a helicopter’s speed.

Aside from the tragic result and unsettling outward appearance, Helistat was an ambitious project attempting to achieve a set of abilities that some still pursue today, and it remains one of the strangest flying machines ever built.