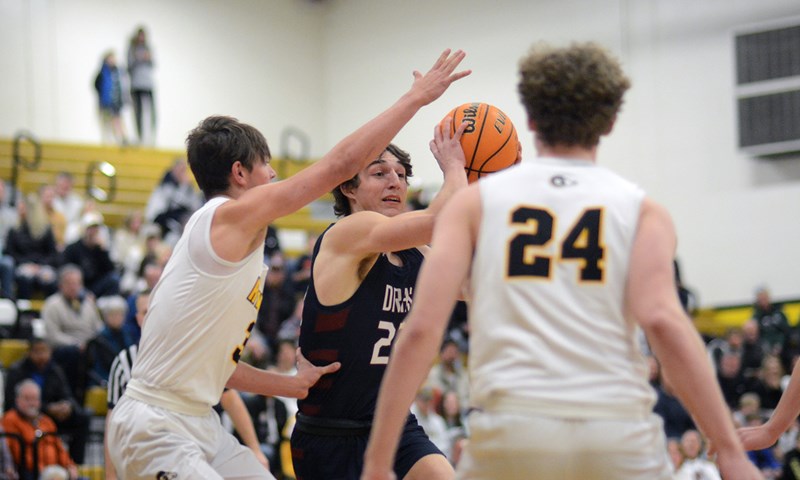 Dakota Ridge — No. 5 on CHSAANow.com’s 5A rankings — faced Green Mountain in a catch-up game from a snowy day last week. D’Evelyn’s boys basketball coach, Will Gosch, took his entire team on a field trip to watch the showdown from the stands behind the Rams bench.

The Eagles, Rams and Jaguars are in a three-way race for the conference title this season. Dakota Ridge (12-2, 5-0 in the league) made the first move forward by parting ways with Green Mountain in a hard-fought 71-62 win.

“It’s a great win that helps secure the top spot in the conference,” said Isaac Pullig, senior of Dakota Ridge. “It was the best competition we’ve had in the league so far.”

The win kept the Eagles undefeated in conference play with D’Evelyn (8-6, 4-0). The Jaguars still have some time before they wrap up league play with back-to-back games against Dakota Ridge (Feb. 8) and Green Mountain (Feb. 10).

Green Mountain (9-6, 4-1) put on an impressive offensive performance early on in the upset offer. The Rams made their first five shots from the field, including 4-for-4 from 3-point range, to take an early 12-6 lead 90 seconds into the game.

“We’ve been talking about confidence and punches with the heavyweight champion all week,” said Green Mountain coach Mike Puccio of his Rams against the 5th-ranked Eagles. “I’m proud of these guys. This game could have gone either way.”

Senior Benson Wachter finished the race with 20 points, including six 3-pointers for Green Mountain. Junior Blake Weslin had a game-high 24 points for the Rams.

“They’re a great team and they have some great shooters,” said Sean Kovar, Dakota Ridge coach. “Coach Puccio is running some great (programs) for them. You looked good.”

Dakota Ridge’s balanced offensive attack began in the second quarter with seniors Pullig, Trevor Fuller and Carson Evans all connecting from 3-point range to give the Eagles a 33-29 lead at halftime.

“I questioned our boys’ performance in the first half,” said Kovar. “We needed high hands and wondered if we wanted to play defense. I felt they reacted a little better in the second half.”

“They stress you out when they have five or six players who can get 20 points,” Puccio said of the Eagles’ balanced attack. “You are doing a good job. They are very disciplined and well trained.”

“We’re versatile and trust everyone on the pitch to take shots. They believe in each other,” Kovar said. “We knew it was going to be a close game. We knew Green Mountain was really good and both teams would come ready to play. It was basketball at a high level.”

“We’re just thinking about one game at a time,” said Kovar. “We know we can lose to anyone any night. A team can get hot, but we keep trusting the process and preparing for our next opponent.”

“We’re looking forward to this league and it’s these rivalry games that are fun,” Puccio said of the duel with D’Evelyn in a conference final on February 10. “We play one game after the other. We have Pomona and Alameda later this week. It’s one thing at a time.”