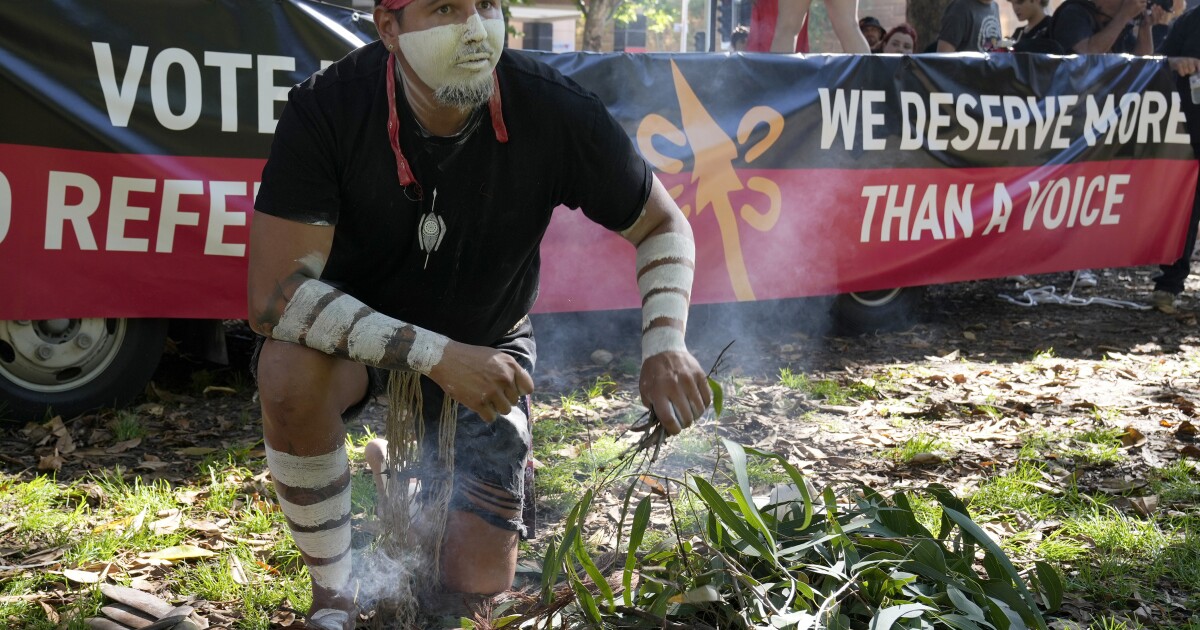 CANBERRA, Australia — Australians on Thursday marked the 235th anniversary of British colonization with a public holiday that has sparked anger at injustice faced by Aboriginal people and focused national attention on a new government push to recognize Australia’s first residents in the constitution.

The government joined several major corporations in giving employees the choice of taking the holiday off or working Thursday and taking another day off instead, in recognition of the growing public unease at the celebration of the hoisting of the Union Jack in 1788 Sydney Cove.

There are increasing public calls to change the date of Australia Day, known to many indigenous people as Invasion Day and Survival Day, because of the disastrous impact on indigenous people of British colonists taking their lands without a treaty.

The focus on Australia’s checkered European history sparked debate on Thursday over a referendum later this year that would create an Indigenous body called the Voice to address Parliament on Indigenous issues.

The referendum, expected to take place between August and November, would enshrine the vote in the constitution.

Prime Minister Anthony Albanese committed to a referendum on the day his centre-left Labor Party government was elected last May.

Albanese said he wanted Indigenous peoples to be recognized as Australia’s indigenous people in the constitution, which has been in place since 1901, ahead of Australia Day next year.

“If not now, when will this change occur? And if not the people of Australia this year, who will make this change that will improve our country, improve our national unity?” Albanese told reporters Thursday.

“It’s a great country. Australia will be even better if we recognize our indigenous people in our constitution,” he added.

Noel Pearson, an Indigenous leader and long-time proponent of constitutional change, said the vote was a step towards “an agreement between the indigenous people and those who took over the continent and founded modern Australia”.

“This year marks the most important year in the relationship between Australia’s Aboriginal people and its so-called settlers in the 235 years since the First Fleet landed,” Pearson wrote in the Sydney Morning Herald on Thursday, referring to the 11 British ships carrying convicts that Established Sydney as a penal colony.

But reactions to the voice have been mixed, including among indigenous leaders.

Jacinta Nampijinpa Price, an Indigenous senator from the conservative Nationals party, opposes the Voice. Her party supports her view that the vote would divide Australia racially.

Lidia Thorpe, an Indigenous Progressive Green Party senator, on Wednesday threatened to oppose the vote unless the referendum issue includes an acknowledgment that traditional owners have never given up their land.

Opposition leader Peter Dutton said his conservative Liberal Party needed more details on what the vote would entail before deciding whether to back a constitutional amendment.

“When you move around the community it’s pretty obvious that people don’t understand what the Prime Minister is talking about,” Dutton told reporters.

“They understand that changing the Constitution is a big deal and we instinctively, like me and like millions of Australians, want better outcomes for Indigenous Australians,” he added.

Indigenous Australians make up 3.2% of the population and are the country’s most disadvantaged ethnic group. They die younger than other Australians, have lower levels of education, are less likely to be employed and are over-represented in prisons.

They were not allowed to vote in federal elections until 1962, and Australian courts did not recognize that their ancestors had lawfully owned the land until 1992, when the British arrived.

Separately, thousands gathered in downtown Sydney to commemorate the 85th anniversary of the original Mourning Day protest in 1938, when protesters made demands, including civil rights, for Indigenous Australians.