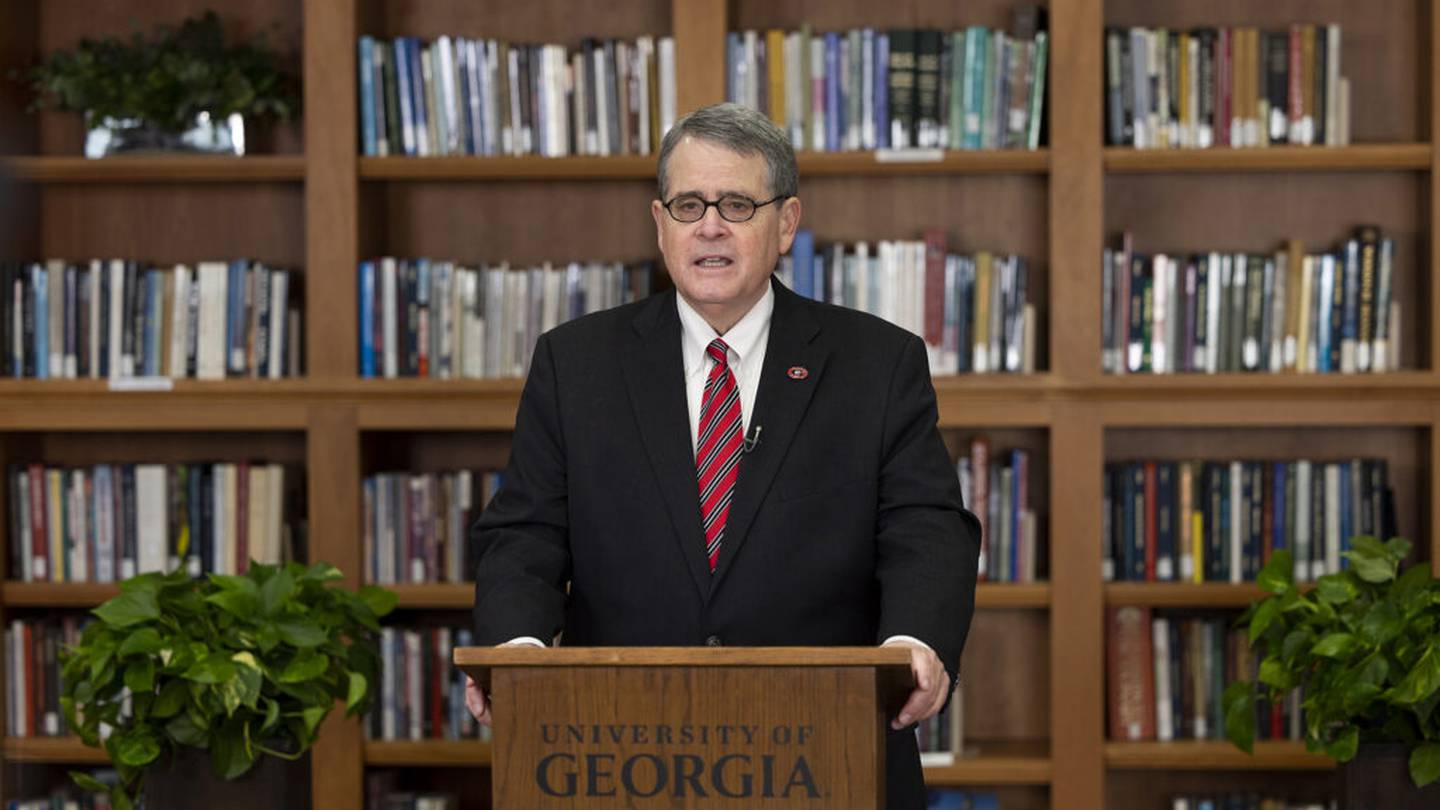 University of Georgia President Jere Morehead delivered his annual state of the university address on Wednesday.

University of Georgia President Jere W. Morehead delivered his annual state of the university address on Wednesday, during which he reflected on all that the university has accomplished over the past decade, while also reflecting on new programs to foster continued success announced.

“The University of Georgia has embraced a bold, ambitious vision for teaching and learning in the 21st century,” Morehead said. “Together, we envisioned an institution where students would thrive amid state-of-the-art teaching, robust support, and learning opportunities that stretched to the far corners of the world.”

The shared vision of the UGA community has resulted in outstanding academic achievement, Morehead said. US News & World Report has ranked UGA as one of the top 20 public institutions for seven consecutive years, and several graduate and professional programs have consistently ranked in the top 10 among peer programs.

Morehead noted that the university’s first-year retention rate has averaged 95% over the past decade, “dramatically exceeding the national average,” while four- and six-year undergraduate graduation rates continued to rise, reaching 75% and 88%, respectively. in autumn 2022.

Last year, UGA was the only public institution to select two students for the Marshall Scholarship and was one of only three state institutions to have a Rhodes Scholar.

Expanded student opportunities have made this success possible. Over the past decade, UGA launched the Double Dawgs program, creating more than 250 pathways for students to earn bachelor’s and master’s degrees in five years or less.

A five-year, $6 million initiative is increasing the use of evidence-based active learning strategies across campus through classroom renovations, faculty training and student programs.

The university also expanded its reach by supporting research and innovation.

The university recruited more than 150 scholars in areas of strategic importance through 11 hiring initiatives, as well as nine new outstanding scholars from the Georgia Research Alliance. It also invested in the Innovation District to connect UGA’s campus to the business world and provide opportunities for ideas and inventions to reach the marketplace and transform lives.

These strategic investments contributed to significant growth in the university’s research and development spending, which exceeded half a billion dollars for the first time in 2022. The number of sponsored awards secured by UGA grantees has doubled in the past decade.

“These results were driven by our exceptional faculty – the heartbeat of our campus – which has received countless awards including a MacArthur Genius Award, SEC Professor of the Year, election to multiple National Academies, numerous Fulbright Scholar Awards and more,” said Morehead.

Recent faculty hiring initiatives have focused on building expertise in brain and behavioral health and integrative precision agriculture, while an ongoing presidential hiring initiative in data science and artificial intelligence has been expanded to hire up to 70 tenure-track faculty members .

As faculty and students continued to improve the lives of others through innovative research and products, the university also invested in those who call Georgia home through a variety of community services and outreach efforts.

Over the past decade, UGA’s Small Business Development Center has supported more than 30,000 entrepreneurs and helped create over 26,000 jobs, while the university’s Georgia 4-H programs have supported over 170,000 students annually. The university’s annual economic impact on the state of Georgia increased to $7.6 billion.

The Archway partnership, which expands UGA resources to address needs and opportunities in rural communities, has been recognized nationally for its significant contributions and received the Association of Public and Land-grant Universities’ highest award for public service.

Morehead’s speech also presented a strong vision for the future. One of UGA’s priorities is increased support for students. “As we look ahead to the decade ahead, we must recommit to ensuring that UGA students are given every opportunity to succeed through robust academic support tailored to their needs,” Morehead said.

He also announced a pilot graduate scholarship program that will provide financial assistance to third- and fourth-year students of good academic standing who are facing financial challenges that threaten their ability to graduate. In addition, the university will allocate an additional $1 million to expand grants for experiential learning.

Morehead said the university will open a one-stop shop for student services in the coming year to improve access to housing and financial aid services, as well as counseling and career preparation resources, among other things. The one-stop shop will be available virtually and in person, with a physical location at the Tate Student Center.

Recruiting and retaining graduate students and staff is another priority in the coming decade. The university plans to expand enrollment in innovative graduate and professional programs to meet the evolving needs of students and the labor market. In addition, the university will continue to invest in employee development programs and promote further salary increases.

Morehead was enthusiastic about new initiatives to expand UGA’s research firms and industry partnerships. “With our significant momentum, UGA is positioned as never before to reach new heights of excellence,” said Morehead. “We are at a crucial point where enormous opportunities await us.”

Morehead announced the establishment of the UGA Innovation District’s Industry Ambassador Program, a three-year pilot to strengthen the university’s commitment to industry. Each year, several ambassadors will work to develop relationships between the university and key industry partners, while also advising on future opportunities for collaboration.

Morehead concluded by thanking the UGA community for inspiring ongoing initiatives and supporting continued growth. “I have no doubt that the past decade will long be remembered as one of our finest,” Morehead said. “But in my view it will be eclipsed in the next ten years.”