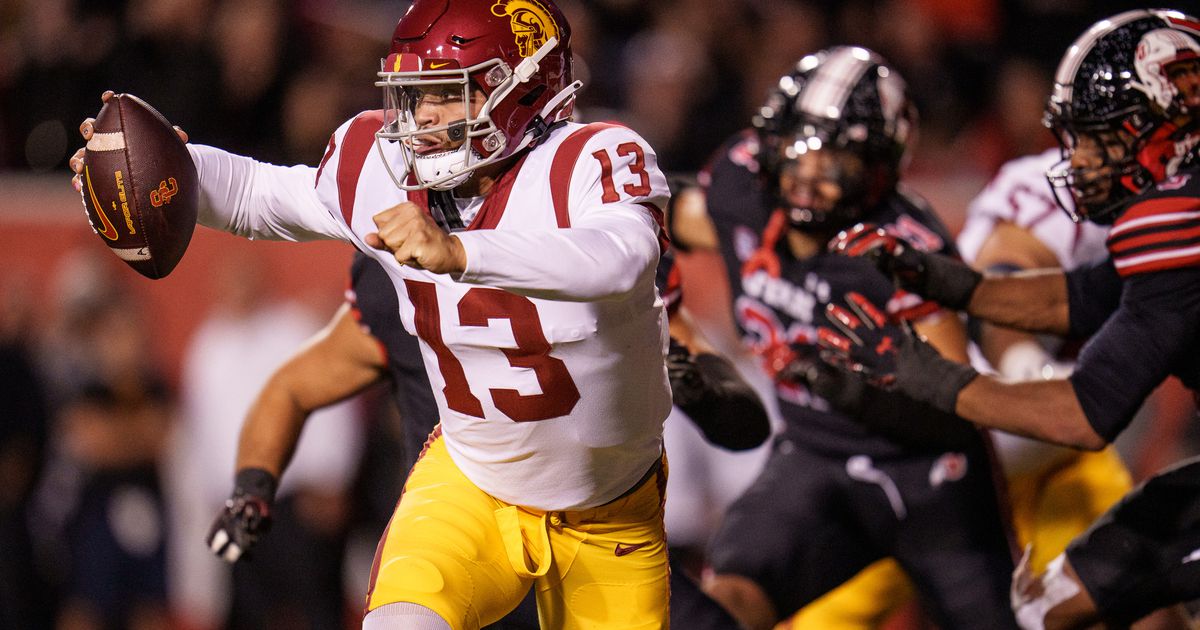 Utes will return to the Rose Bowl with a win in the Pac-12 championship game, while Trojans will likely go to the college football playoffs if they prevail.

It wasn’t just that USC lost a game at the University of Utah on Oct. 15, it was how the Trojans lost their only game of the season.

At Rice-Eccles Stadium, trailing 14 points three times in the first half, Utah woke up on both sides of the ball after halftime.

The defense couldn’t stop Caleb Williams, but it did slow the star quarterback significantly in his sophomore year. The offense scored touchdowns on five of their last six possessions, topped off by Cam Rising’s 1-yard rush to fourth and the subsequent two-point conversion run by 48 seconds for a 43-42 win.

As the No. 4 Trojans and No. 11 Utes prepare to face off again in Friday night’s Pac-12 championship game (6 p.m. FOX), the stakes are higher for both sides than they were six weeks ago. Utah goes into the Rose Bowl with a win, while USC is likely to make the college football playoffs if the Trojans prevail.

The way USC head coach Lincoln Riley sees it in freshman year, looking back six weeks does no one any good.

“It’s not a revenge game, it’s not,” Riley told reporters in Los Angeles earlier this week. “We played a really good football game, as did Utah in Salt Lake City. It was an elite college football game that came down to a game here or there. They got us back then, but this isn’t about this game. This is a new game, a new challenge, a new environment. The teams have evolved, both teams have certainly changed over the year. This is about that, and obviously the opportunity that presents itself.”

Whether or not Friday night could win anything from a game that happened six weeks ago is debatable, but that night’s crucial defensive matchup for Utah stands out enough that it’s worth sniffing out at Allegiant Stadium in Las Vegas watch.

The second half marked a turning point for the defense. After giving over 500 yards of total offense to UCLA and USC in consecutive weeks, the unit has retired and finished the regular season ranked #1 in Pac-12 and #17 national total defense with 317.5 yards per game.

Whittingham noted that prior to the first meeting, USC was a “10” strong team, meaning one running back and four receivers, with “11” staff being the second group, with a running back, a tight end, and three receivers. Whittingham believes that’s changed now that USC is offering more “11” staff looks.

Riley indicated he doesn’t expect Utah to fundamentally change what has gotten them to this point, but turned to the old coaching notion of teams developing over the course of a season. Guys get hurt, new guys fill in, different guys are introduced.

What Riley said there fits in with what Utah has been like lately.

Rising injured his left knee during that first meeting and has worn either a brace or a protective sleeve ever since. Dalton Kincaid shredded the Trojans with 16 catches for 234 yards and a touchdown but has since dealt with a shoulder injury and now what appears to be a lower back problem in Colorado last week. Whittingham said Monday he expects Kincaid to play on Friday.

Clark Phillips III missed the Colorado game, Tavion Thomas is off the team, Ja’Quinden Jackson is coming off the first 100-yard rushing game of his career.

Most of the personnel USC will see Friday night are the same as they were on October 15, but that doesn’t mean Utah is the same team.

“Perks are you guys are the most likely to know each other and how they’re going to play you,” Williams said. “The things that have worked for them, they’ll probably practice a little more and get a few more repetitions of it. Let it go a bit longer, and then try throwing in at her some things you haven’t seen.

“Cons are you’ve already played against them, they’ve seen things you’re good at and they’ll practice those and get a lot of reps with it.”